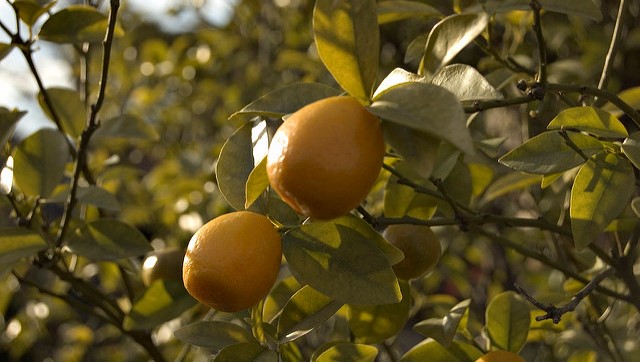 The Japan Shopping Tourism Organization conducted the survey in 2015, asking a question about desirable souvenirs from Japan. Fruits ranked second among respondents in Hong Kong and Thailand, trailing Japanese-style sweets, and ranked third in some other parts of Asia such as Malaysia. (Paul Davidson, Flickr/Creative Commons)

KYOTO — Tourist farms in Japan have been attracting hordes of foreign visitors who are placing fruit picking high on their travel itineraries as the global reputation of Japanese fruit grows.

With more tourists seeking experiences over material goods during their trips, a number of companies have started getting involved in farm tourism, and tourist farms are becoming can’t-miss destinations, especially outside major cities.

The reputations of farmers who actively invest in and promote their farms are spreading beyond borders on the internet.

“Sweet and fresh,” said Thammaporn Rattanatan, 45, from Thailand, after tasting some of the produce at a strawberry farm in Chikushino, Fukuoka Prefecture, in late May. “These fruits are high-end products in Thailand but they’re reasonable here,” she said.

Japanese strawberries boast high quality but are very expensive in Thailand due to logistical costs. So a 40-minute all-you-can-eat strawberry picking experience for 1,900 yen ($17) was an attractive offer for her and many other visitors.

Between November 2017 and May 2018, about 4,200 foreign travelers, a 1.5-fold increase from two years earlier, visited the Chikushino strawberry farm, backed by positive reviews on Facebook. The farm is located a 30-minute drive from Fukuoka airport.

It opened a cake shop in February 2017 and will begin blueberry picking this summer as part of a plan to attract visitors throughout the year.

Another fruit farm growing grapes and apples in Kumamoto attracts about 10,000 people a year from abroad.

“It is important to broadcast our existence as well as the attention we pay to the quality of our fruits,” said Masaaki Maeda, head of the Kichijien farm, who pitches his business to Taiwanese travel agencies and other companies.

According to the Japan Tourism Agency, overseas visitors to Japan spent 143.9 billion yen on leisure activities in 2017, more than four times the amount spent four years before.

But since the ratio of spending on leisure activities among entire travel expenses was lower than in data revealed for Europe and the United States, both public and private sectors in Japan see even greater potential for growth.

J&J Business Development, a joint venture of credit card company JCB Co. and travel agency JTB Corp., opened the website “Japan Fruits” last year that introduces some 780 farms and their agricultural produce based on the results of a survey.

The Japan Shopping Tourism Organization conducted the survey in 2015, asking a question about desirable souvenirs from Japan.

Fruits ranked second among respondents in Hong Kong and Thailand, trailing Japanese-style sweets, and ranked third in some other parts of Asia such as Malaysia.

But the survey also revealed that overseas consumers don’t know much about what kinds of fruits are harvested in which seasons and regions of Japan.

J&J Business Development is planning to expand the reservation and online shopping functions of the site.

Since the orchard has received rave reviews, it will increase its variety of apples so that visitors can eat and compare them.

Japan Airlines Co. plans to open a facility in which visitors can experience harvesting strawberries and sweet potatoes in 2020 through a new agricultural company.

A survey by the Agriculture, Forestry, and Fisheries Ministry in fiscal 2015 showed the average annual sales of 6,700 nationwide businesses, which operate tourist farms, were relatively small at 5.64 million yen, but some experts see potential in tourist farms as a means of revitalizing rural economies.

“Agriculture is an effective means for rural areas to exhibit a difference with urban areas in terms of tourism,” said Chizu Hori, senior research officer at the Mizuho Research Institute.

“Coordination with other local farms and companies as well as municipalities will be key” to attract more visitors, Hori said.

New class of herbicide may be on the horizon