Subscribe
Home / Florida / For animals, many ways to be ‘World’s Best Mom’ 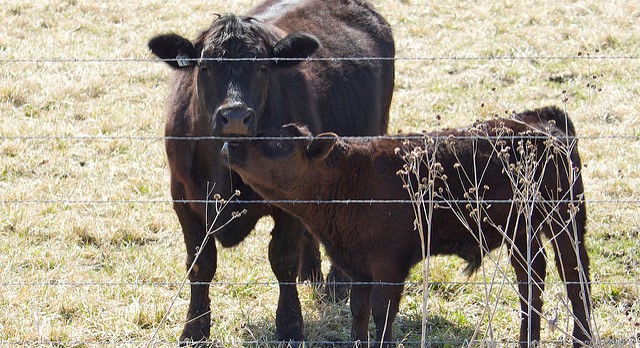 Some offspring start pestering mom before they are even born, said Mario Binelli, assistant professor in the department of animals sciences who studies cattle reproduction. “When the calf embryo is only two weeks old, it must tell the mom that she is pregnant. It does that through very specific biochemical signals,” Binelli said. (David DeHetre, Flickr/Creative Commons)

GAINESVILLE, Fla. — In the animal kingdom, motherhood comes in all shapes and sizes — and some versions are downright strange, according to researchers in the University of Florida’s Institute of Food and Agricultural Sciences, and the Florida Museum of Natural History.

As we focus on the mothers in our lives this Mother’s Day, consider the wild ways animals do their versions of “world’s best mom.”

You get under my skin

For the Surinam toad, giving birth means giving the skin off your own back. Now that’s motherly love.

“As part of an elaborate underwater courtship, females release eggs that males fertilize with sperm and then push into the skin of her back,” said Dave Blackburn, associate curator of amphibians and reptiles at the Florida Museum of Natural History. “Over time, the fertilized eggs and developing embryos become embedded into the skin of the mother’s back.”

When the babies are mature, they burst out of the mother’s back, leaving pockmarks that will make your own skin crawl.

This approach to motherhood may seem extreme, but other frog and toad species are known to have similar practices, Blackburn said. “Amphibians, including both moms and dads, often exhibit complex parental care and a wide variety of ways of caring for young have evolved.”

Okay, kids, duke it out

For some species, sibling rivalry is a life or death struggle.

Long legged wading birds such as egrets and herons practice what’s called “brood reduction,” said Peter Frederick, professor of wildlife ecology and conservation. This happens when the birds lay three to four eggs, but only end up raising two of the chicks.

“The larger, older chicks often attack the younger ones, and eventually force them out of the nest, where they die – the adults stand by and watch,” he said.

But Frederick’s research suggests this rather cold approach to parenting helps the birds prevent predators from stealing eggs and chicks. This is because the chicks that have been forced out of their nests attract alligators, who in turn end up attacking raccoons and other animals who raid nests, Frederick said.

Remember the part in “Alien” when the monster explodes out of that poor guy’s stomach?

You can find similar scenes on Earth — in the insect world, said Adam Dale, assistant professor of entomology. And they’re just as gruesome.

Called parasitoids, some species of flies and wasps lay their eggs in other insects. Then the babies hatch and eat their host alive, he said.

“Parasitoids are one of the most important components of natural biological control of insect pests like aphids, whiteflies, scale insects, mole crickets and many caterpillars,” Dale explained. “Therefore, it is important to promote the ongoing science fiction in your back yards and gardens.”

A care package from mom

When honey bees reproduce, they have a whole colony to help raise their young. Not so for solitary bee species, who are all single moms, said Rachel Mallinger, assistant professor of entomology, who studies solitary wild bee species native to Florida.

Even though they’re on their own, solitary bees make sure cupboards are stocked before the babies are born.

“Some mothers make their nests below ground in tunnels, while others nest above ground in stems, reeds, cavities or wood,” she said. “The mother collects pollen and nectar from flowers, which she deposits into an individual chamber or cell within the nest. She then lays an egg on top of this pollen ball. The young larval bee will emerge from the egg and eat the food that its mother provided.”

Some offspring start pestering mom before they are even born, said Mario Binelli, assistant professor in the department of animals sciences who studies cattle reproduction.

“When the calf embryo is only two weeks old, it must tell the mom that she is pregnant. It does that through very specific biochemical signals,” Binelli said. “If the mom does not ‘hear’ the signals, she will not know that she is pregnant and the pregnancy will be lost. The analogy would be that the baby cries to call mom when he or she wants to be fed. If the mom does not hear the cry, the baby will not get fed and grow.”