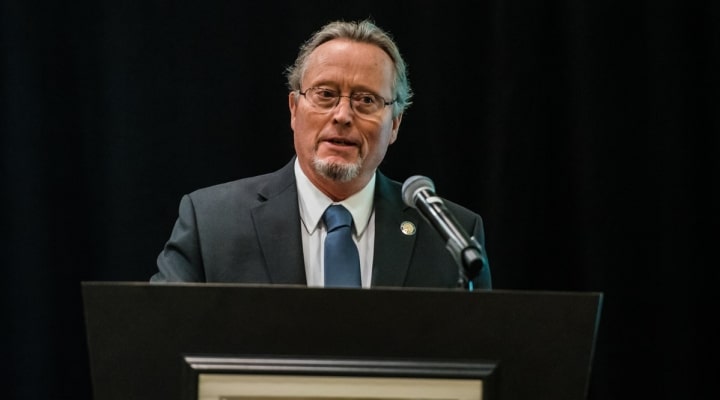 Commissioner Ball said, “Nourish New York is successfully combatting the difficulties farmers and families are facing during the COVID-19 pandemic by connecting them through food banks such as Foodlink. Our partnership with Foodlink is the link that keeps our state’s food businesses going and keeps struggling families fed. I want to thank Foodlink for involving so many Finger Lakes area producers in the Nourish New York initiative.” (Photo By Eric Jenks)

ALBANY — State Agriculture Commissioner Richard A. Ball today announced Foodlink has purchased 697,746 pounds of surplus food from New York farmers since the launch of Governor Cuomo’s Nourish New York initiative in early May. This includes 67,807 pounds of nutritious milk and 629,939 pounds of produce, such as apples, carrots, cabbage, potatoes, onions, radishes, kale, chard, broccoli rabe, bok choy, spinach, summer squash, cherries, and blueberries, as of the end of last week that have been provided to thousands of households in need in Foodlink’s ten-county Finger Lakes region.

In addition, Foodlink has also implemented a voucher program in partnership with Upstate Farms to provide vouchers that people can redeem at stores for milk. So far, 54,000 vouchers have been purchased for distribution to residents in the agency’s emergency food network.

Commissioner Ball said, “Nourish New York is successfully combatting the difficulties farmers and families are facing during the COVID-19 pandemic by connecting them through food banks such as Foodlink. Our partnership with Foodlink is the link that keeps our state’s food businesses going and keeps struggling families fed. I want to thank Foodlink for involving so many Finger Lakes area producers in the Nourish New York initiative.”

Julia Tedesco, President and CEO of Foodlink, said, “The Nourish NY initiative has allowed Foodlink to provide a wide array of healthy produce and dairy options for thousands of households in the Rochester area. We know the Finger Lakes region remains the breadbasket of New York State, and we’re thrilled to connect local farmers with families who need our help during this critical time.”

The Nourish New York initiative aims to quickly reroute New York’s surplus agricultural products to the populations who need them through the state’s food banks. The state is providing $25 million to food banks and other emergency food providers so they can buy surplus milk, yogurt, cheese, vegetables, fruit and more from New York farmers who have lost markets as a result of school and restaurant closures.

In the last eight weeks, Foodlink has held more than 100 distributions in Allegany, Genesee, Livingston, Monroe, Ontario, Orleans, Seneca, Wayne, Wyoming, and Yates counties. The non-profit agency has also continued to supply food pantries and distributions from other organizations throughout this time. Visit Foodlink’s website or call 2-1-1 to find upcoming distributions, locate food pantries and soup kitchens, and to learn more.

Betsy Brightly, Manager of Brightly Farms LLC, said, “When the shutdown began, we had no orders coming in. Nourish NY helped us to avoid layoffs. It also helped keep cash flow coming in and make sure that food wasn’t wasted.”

Rob Root, partner, Root Brothers Farms, said, “Nourish NY helped a lot. It put demand in the market that had been flattened. We lost all of our East Coast business. Nourish NY gave us a spring market. It has been a tremendous help.”

Larry Webster, Chief Executive Officer of Upstate Niagara Cooperative, Inc,. said, “Our cooperative’s farmer-owners are grateful to be able to participate in the Nourish NY program. The vouchers are specifically helpful, as they enable even those food banks that may not have ample refrigeration on site to provide nutrient-rich milk to families in need.”

Through mid-July, Nourish NY has provided funding to New York’s food banks to purchase more than 5.8 million pounds of surplus products. Food banks across the state have purchased more than $6.1 million in Nourish NY product from New York’s processors and farmers who have temporarily lost markets as a result of COVID-19. There have been over 800 Nourish NY food distribution events held across New York to help families in need since the program was launched in May.

–NYS Department of Agricuture and Markets