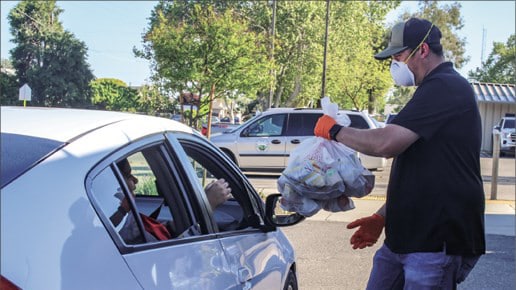 California Farm Bureau Fresno-Madera Young Farmers and Ranchers Chair Nick Rocca, above, distributes hot meals and produce to residents of Biola. Rocca and fellow YF&Rs partner with a church and a local school district to distribute farmer-donated food to families who have had income affected by COVID-19. (Photo/Christine Souza)

SACRAMENTO, Calif. — The nation’s complicated and essential food system continues to adjust to the sharp, sudden shift in demand spurred by stay-at-home orders and food-service shutdowns during the COVID-19 pandemic. For farmers and others in the food supply chain, the immediate and long-term future remains uncertain as peak harvest season nears for many commodities.

“Our farms and ranches are not left unaffected by this,” Johansson said. “A Farm Bureau survey that we’re doing is finding that more than half of responding members have lost off-farm income because of the shutdowns, and this is on top of plummeting commodity prices. In some cases, there may be no market for crops this harvest. There simply won’t be enough (relief) money to cover all the losses or to make everyone whole.”

The U.S. Department of Agriculture announced plans to distribute $16 billion in direct payments to farmers and ranchers affected by pandemic-related losses, plus another $3 billion in food purchases for food banks and other charitable organizations (see related story).

California Department of Food and Agriculture Secretary Karen Ross said the pandemic is teaching the state a lot about the different distribution channels in the food supply system.

“For the time being, we have to try to keep the system as whole as possible, so that as business comes back, we can turn the light switches back on and we haven’t lost a foundational part of the infrastructure,” Ross said.

As food demand shifts from food service to retail, she said, not every company can retool its production chain for different marketing channels, such as to change packaging, and companies may be concerned whether markets will be there in the long term.

With about half of the state’s vegetable crops sold to food service such as restaurants and the other half to retail grocers, Cory Lunde of Western Growers said, “If we don’t turn this around in fairly short order, then it could be a very, very difficult season for California farmers.”

Growers of winter vegetable crops have seen immediate losses, Lunde said, and as production shifts to the Central Coast, concerns arise about farmers who have staggered plantings in the ground heading into peak harvest.

“The great unknown is: How long will this pandemic last and how long will the impact last on the market?” Lunde said. “It could be a completely lost year for California growers who harvest in the summertime or, if we’re able to turn this around, maybe there could be a short, four-to-six-week window where we can get the tail end of the season.”

California Grocers Association spokesman Dave Heylen said while mass purchases at grocery stores have subsided, retailers are addressing the backlog and continue to catch up from the initial wave of panic buying. In seeking to enhance efficiency, he said, stores moved in recent years to “more real-time delivery and have much smaller stock on hand.”

Because the pandemic caused a nationwide impact, the shortages of supplies could not be immediately filled by nearby regions, which is how the supply chain works in the event of a localized natural disaster, Heylen said.

At the same time, food banks have seen a surge in demand as unemployment rates rise.

Steve Linkhart, who directs the Farm to Family program for the California Association of Food Banks, said by mid-April the program had “already shipped the normal month’s worth of products, over 12 million pounds.” He said food banks are not running out of food, but said he expects demand at food banks to continue to increase.

“Our food banks are becoming another marketing outlet; it won’t make anybody a profit, but it might help recover costs,” she said. “One of the most important things for us to do is to be able to salvage as much of that food as possible for our food banks, because we have some of the highest unemployment numbers that we’ve ever seen.”

The Farm to Family program works with farmers to procure fresh produce and serves more than 45 food banks and pantries statewide. The program works with about 120 farms and recently received an additional 200 farmer donations. It also has funds to help pay for harvesting, packing and transportation, Ross said.

In addition, a number of individual farmers, agricultural businesses and cooperatives, processors, wineries and many others have donated food or money to local food banks and other organizations that supply food to those in need, as well as meals for first responders.

In one such effort, members of the Fresno-Madera Young Farmers and Ranchers organization arranged food donations for families from local farmers, in partnership with People’s Church and the Fresno Unified School District.

Fresno County farmer Nick Rocca, who chairs Fresno-Madera YF&R, said, “We grabbed every contact we could to get people fresh produce, fresh food and hot food. The need is everywhere.”

During a food-distribution effort at a Biola school, volunteer Jennifer Duarte said, “To see families in our community graciously accept the food that we have brings peace to my heart, because this is everything when you’ve lost a job.”

As the food supply system works through the short-term challenges, the pandemic may also prompt longer-term changes in how people grow, distribute and consume food.

“If I’m a business owner and I had 100% of my product dedicated to the food-service sector,” Lunde said, “I’m probably going to make sure that I have the ability to transition and pivot in case there’s a collapse in the future.”

When shelter-in-place orders are ultimately lifted and it is time to return to work, Johansson said, “I think the biggest realization now is, we have an amazingly diverse food supply that is often taken for granted.”

“With that diversity comes a complexity that is nothing short of amazing and has been driven wholly by what the consumer wants,” he said.

UN: Agri-food systems must appeal to youth to secure the future
July 7, 2021