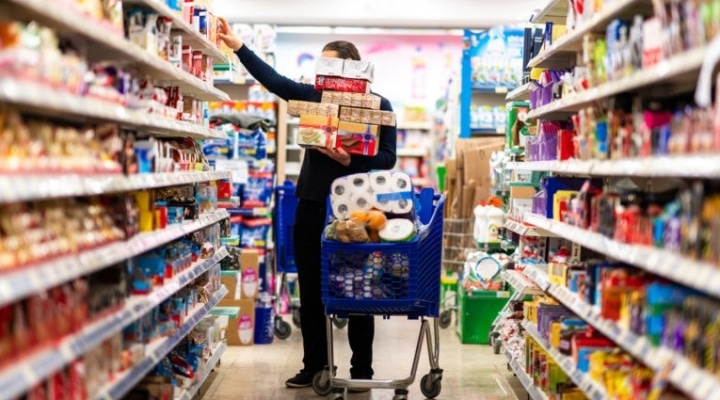 As supplies strengthen, the purchasing practices of consumers could be changing as a result of the pandemic, and creating a “new normal” instead of returning to pre-pandemic practices, said David Anderson, Ph.D., Texas A&M AgriLife Extension Service economist in the Department of Agricultural Economics, College Station. (Courtesy Photo)

COLLEGE STATION, Texas — Links of the food supply chain, especially the meat supply, are regaining strength after periods of uncertainty during the early months of the COVID-19 pandemic, once again instilling consumer confidence, according to Texas A&M AgriLife experts.

As supplies strengthen, however, the purchasing practices of consumers could be changing as a result of the pandemic, and creating a “new normal” instead of returning to pre-pandemic practices, said David Anderson, Ph.D., Texas A&M AgriLife Extension Service economist in the Department of Agricultural Economics, College Station.

Anderson said prior to the COVID-19 shutdowns, consumers typically purchased about 50% of their food from grocery stores for home consumption and then other 50% was met through outside food services, such as restaurants and schools.

The food service side of that equation has not completely recovered, he said, as restaurants are still operating at a limited capacity, if they reopened, and schools are just now starting to open, but again, not all the students will return to the institutions. So, the food supply chain is still adjusting to the changing markets.

There are still some concerns within the agriculture industry and getting back to the balanced marketplace will take an economic recovery that reduces unemployment and revives household incomes, said Greg Pompelli, Ph.D., director of the Texas A&M AgriLife-led Center of Excellence for Cross-Border Threat Screening and Supply Chain Defense Center, or CBTS, a Department of Homeland Security Science and Technology Center of Excellence.

Also, given the importance of global markets to U.S. agriculture, the focus will be on returning to pre-pandemic trade levels, Pompelli said. Trade disputes and the pandemic’s impact on the incomes of global consumers have added uncertainty about the strength of export market opportunities for U.S producers.

Both Pompelli and Anderson agreed that consumers are finding most items they want and need at the grocery store level, although it might not include all of their favorites just yet.

“Where we see changes at the retail level boils down to human behavior. In the early days of the pandemic with paper towels or toilet paper, people assumed they wouldn’t be able to find these products for a year, so they stocked up. Now they are settling into new routines and sometimes with new products.” —Greg Pompelli, Ph.D., director of the Texas A&M AgriLife-led Center of Excellence for Cross-Border Threat Screening and Supply Chain Defense Center

Now, he said, consumers are adapting and moving away from their initial reactions as their concerns about food availability have diminished.

“Today, for the most part, consumers who go to the grocery store might not see exactly what they want, but there are a lot of substitutes available,” Pompelli said. “There will always be some things, favorite brands, that people don’t have a willingness to sub, and some of those still might be hard to find in some areas.”

One change developing from the pandemic is the future may include more delivery services, boxed meals and curbside grocery pickup options as consumers maintain some of their habits from when store shelves and meat cases were bare and people were asked to stay home, Anderson said.

“Another adjustment I think we are going to continue to see over time is more delivery services of groceries and food. More and more of the shoppers in the grocery aisles are employees putting together grocery orders, either for curbside pickup or for companies that bring the order to your home.”

This pandemic has boosted those businesses, and that will become the new norm for those with the money to pay for the convenience of it, he said. There will still be people who choose not to partake in those services, who live in areas where those services are not yet available, or who can’t afford them.

When considering the cost of food to consumers, part of the reason we pay so little for food is we have this big, efficient system – most of the time, Anderson said. This became a big issue for the produce, egg, milk and meat markets, as they are perishable products that can’t sit on the shelf and wait.

“With the dramatic shutdown of restaurants and food service, it took a while for the industry to make the switch to providing the majority of their supplies to grocery stores, instead of the restaurant and food service industry,” Pompelli said.

Overall, Pompelli said the food and agriculture industries have been resilient, but the pandemic has exposed vulnerabilities in our food supply.

“Where we saw some milk dumped and crops plowed under because demand in certain institutional and food service supply chains vanished overnight, I think that is behind us,” he said. “I think we’ve learned some things. I have been impressed by how some industries were able to recover, do more to protect their workers, and shift their supply chains to meet increased retail consumer demand.”

Anderson said when restaurants closed during a prime produce market window and harvest season, there was just no place for those highly perishable products to go. Think about how many salads are served at restaurants – it highlights the perishability of those crops, and the highly season nature of production. When the price received didn’t cover harvest costs, the crops were left or plowed up.

“We’re probably not back fully in that area because the restaurants are not back at full capacity,” he said. “While grocery store sales continue to be greater than what we had a year ago, we still have less going through the restaurants. This adds a little uncertainty for next year’s crop. In our Winter Garden area and Rio Grande Valley, we produce a lot of product over the winter and that will depend on how the market recoups moving forward.”

Eggs and dairy also suffered oversupply and packaging issues due to restaurants and food service reductions, Anderson said. For instance, restaurants typically get eggs in 60-count flats, and those eggs needed to be repackaged and sent to the grocery store, but there weren’t enough dozen-egg containers. And then there was the question of how to divert from non-retail sale items to retail sale.

While many of the issues have been addressed, especially as more restaurants come back online and schools get back in session, that market still hasn’t been completely reestablished, he said. Consumers might not see a fully stocked department like pre-COVID-19 yet or see a greater number of 18-pack instead of dozen-egg cartons.

Dairy faced the same issues, Anderson said. Schools shut down and because the industry moves a lot of fluid milk through tiny cartons to that market, suddenly they had to deal with the packaging issue. Fluid milk prices collapsed as the industry tried to adjust.

“Looking at the data, the drinking milk they were selling actually increased, but they lost a lot through food services in the form of cheese and butter,” he said. “But this is also rebounding as production adjusted to match the market, and milk prices are working their way back up.”

When the pandemic hit, the consolidated meat packer situation was the most visible logjam in the food supply system, Anderson said.

It only took one or two plants to close their doors or reduce their production to create issues that extended to the consumer meat cases, he said. There were also some problems at processors where boxed beef was sent for further processing, but they were not as large as those at the packing houses.

Overall, though, the meat supply chain has adjusted during the past four months and seems to be leveling back out, Anderson said. Packing plants that had slowed down and/or closed are back online, and beef production the past eight weeks has been higher than a year ago. Pork production is following the same path as well.

“In terms of producing meat, we’re back,” he said. “We were processing fewer animals for a while, but adjustments are occurring so the total meat being produced every week is back to where it was.”

Anderson said the bottleneck in the food supply system still being worked through is with restaurants that remain closed or that are trying to operate at a reduced capacity.

“While we were not going to the restaurant, we were buying more meat from the grocery stores,” he said. “But we are not back to where we were before coronavirus on overall meat purchases, because the grocery store sales don’t fully make up for the lost restaurant sales.”

Before the pandemic, the meat market was typically divided with consumers getting half from grocery stores and half from food services such as restaurants and schools, Anderson said. But clearly that changed over the past few months, so there’s a different mix of products being purchased.

During the height of the crisis, stores limited purchases on the meat cuts most consumers were familiar with, or sometimes the meat just wasn’t there, he said. At other times, there was beef and pork coming into the stores, but people were seeing a different selection of cuts than they normally have seen, based on grocery store strategies.

Many decisions on what to stock were based on their clientele base and also reacting to the recession. Income is a factor in meat purchases, Anderson said. During the height of the pandemic, these prices surged, but wholesale prices have now dropped back down below what they were prior to the coronavirus pandemic.

“We have not seen the prices adjusted in the retail level reports, but I think we are beginning to see the grocery store prices starting to drop.”