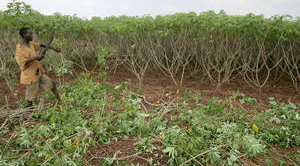 FREETOWN, Sierra Leone — Some 153 million people, representing about 26 percent of the population above 15 years of age in sub-Saharan Africa, suffered from severe food insecurity in 2014-15, according to a new FAO report.

The second edition of the Regional Overview of Food Insecurity in sub-Saharan Africa (2016) underscores how severe food insecurity and poverty pose a major challenge to the region’s ability to achieve the Sustainable Development Goal of ending hunger by 2030.

“What it means is that, around one out of four individuals above 15 years of age in sub-Saharan Africa was hungry, meaning they did not eat or went without eating for a whole day for lack of money or other resources for food,” said Bukar Tijani, FAO Assistant Director-General and Regional Representative for Africa, commenting on the findings of the report.

“This assessment underlines the significance of the challenge facing the region in meeting SDGs’ target 2.1 and the relevance of sustainable and substantial support to food security and nutrition policies and program in the region,” Tijani said.

At the aggregate level, sub-Saharan Africa achieved adequate food availability, in terms of dietary energy supply, over the 2014-2016 period. However, several countries in the region remain highly dependent on food imports to ensure adequate food supplies, with some sub-regions depending on imports for up to a third of their cereal needs.

This indicates that substantial demand for food exists for these countries, and there is a need to increase agricultural productivity, food production and value addition, among other things.

Speaking at the launch of the report, Sierra Leone’s Minister of Agriculture, Forestry and Food Security, Patrick Monty Jones, noted that the agriculture sector in sub-Saharan Africa is strongly based on household small-scale farming, and that the majority of African farmers cultivate less than 10 percent of their land, which could be attributed to many factors — including poor governance of land tenure and shocks and stresses due to climate change resulting in food insecurity.

“To overcome these challenges, the agricultural sector’s strategic objectives and priority activities should include increased production and productivity of staple food crops through a value chain approach for food security, promote commercial agriculture; promote and increase value-adding activities for agricultural products, increase the production and export of cash crops, and improve access to finance for farmers,” he said.

The report recognizes the need to spur a broad-based economic transformation, particularly in the agricultural sector, which is the major source of income in sub-Saharan Africa, to generate a substantial reduction in poverty and improve food accessibility.

It cites unstable food markets and commodity prices and natural disasters — including severe droughts and floods leading to failed crops, insufficient pasture feed and water for livestock — as well as persistent political instability, conflicts and other forms of violence, as the main triggers of food insecurity and malnutrition in the region.

The report noted that on average per capita income, is three times lower in sub-Saharan Africa than in other regions of the world in 2014, although the region witnessed a 30 percent increase between 1990 and 2014.

Also, poverty levels declined in the region but remained the highest in the world, with the region being far from halving the proportion of people living in poverty.

Moreover, even though some progress is being made in reducing malnutrition, evidence shows that many countries in the region suffer from a triple burden of malnutrition, that is, under-nutrition, micronutrient deficiencies and overweight and obesity, the latter being responsible for rising levels of non-communicable diseases.

According to the report, a varied number of comprehensive social protection policy frameworks and institutional arrangements have been introduced in the region to integrate nutrition and agriculture.

“It is imperative for countries to adopt multi-sectoral and multidisciplinary approaches in integrating agriculture, nutrition, social protection and related measures by realigning, integrating and coordinating activities and accountability mechanisms to deliver evidence-based sustainable nutrition solutions and outcomes,” Tijani said.

The report also calls on countries to review and exert efforts in order to improve the translation of political commitments and declarations into effective program on the ground, particularly in the context of the ambitious targets set in the Malabo Declaration for 2025 and the Sustainable Development Agenda for 2030.

It laments that several documented policy commitments and strategies are yet to generate the expected results, but says that many country experiences illustrate the feasibility of eliminating hunger and malnutrition through the right combination of cross-sectoral policies and programs.

The report advocates for continued policy reforms to sharpen their focus, and the creation of an enabling environment for investment and participation by all relevant stakeholders, saying that this is critical to ending hunger, and achieving food security and improved nutrition.

It specifically calls for the development of innovative resource mobilization from a broad set of stakeholders from the public and private sector and financial instruments that would enable the implementation of actions in a sustained and widespread manner to scale up food security and nutrition programs in sub-Saharan Africa.

“As the magnitude and impact of crises and disasters increase — aggravated by the over-exploitation of natural resources and climate change — more and more households, communities and governments in the region are less able to absorb, recover and adapt, making them increasingly vulnerable to future shocks,” the report said.

The report urges governments to intensify their efforts to ensure that years of gradual agricultural development gains are not wiped out by recurrent shocks, adding that increasing the resilience of agricultural livelihoods and promoting and financing climate-smart agricultural practices would be a powerful lever to reach the pledge of the Sustainable Development Goals “to leave no one behind.”

Furthermore, immediate short, medium and long-term measures are needed to promote and scale up appropriate technologies to adapt and mitigate climate variability and change, to develop resilience monitoring and evaluation frameworks, and to minimize the impacts of El Niño on affected communities.

“Building resilience through peace-building efforts is critical to food security and nutrition. In armed conflict and protracted crises, protecting, saving and rebuilding agricultural livelihoods to save lives and create the conditions for longer-term resilience is a key step towards ensuring peace and stability. The critical role of the agriculture sector in crisis situations must not be overlooked and necessary investments need to be made,” the report recommends.