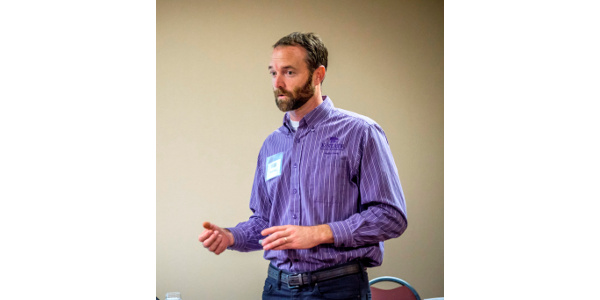 TOPEKA, Kan. — For over a decade, the Kansas Rural Center (KRC) has worked to promote a farm and food system that increases the amount of fruits, vegetables and other specialty crops grown in Kansas and consumed by Kansans. While Kansas currently imports over 90% of the fruits and vegetables consumed in the state, efforts to get more locally produced food onto dinner tables in Kansas are slowly taking hold, and food hubs are playing a role in this success. KRC’s Annual Farm & Food Conference last fall included a workshop that provided an update on some of the food hubs operating in the state, covering how they function, the benefits they provide, and some of the challenges they face.

According to the USDA Marketing Service, “A regional food hub is a business or organization that actively manages the aggregation, distribution, and marketing of source-identified food products primarily from local and regional producers to strengthen their ability to satisfy wholesale, retail, and institutional demand. Regional food hubs are key mechanisms for creating large, consistent, reliable supplies of mostly locally or regionally produced foods.”

“Food hubs can play a role no matter what stage a local food system is in,” Marlin Bates told attendees of KRC’s workshop on food hubs. Bates served as the K-State Research and Extension Horticulture Agent in Douglas County, Kansas, until he recently took the role of County Extension Executive Director. As the Horticulture Agent, he focused on increasing the local foods’ supply by working with new and existing specialty crop producers. Supporting growers includes expanding markets for their products, which means attracting new customers.

The University of Wisconsin Center for Integrated Ag Systems identified five tiers, or relationships, between food producers and consumers.  At one end of the spectrum is personal production of food, including backyard and community gardens, fishing, hunting and gathering. At the opposite end of the spectrum are multi-national food conglomerates such as ADM and Cargill, who distribute on a global scale. In the middle are food hubs, which take food grown by farmers and other producers and distribute it to larger outlets. A food hub serves as an aggregator and distributor so that produce from many sources can be pooled and marketed to outlets unavailable to individual growers. By marketing as a bloc, like a cooperative, the value to the farmer is retained as much as possible.

While the idea and term ‘food hub’ is currently very popular, it is not new. Rolling Prairie Farmers Alliance, a cooperative CSA (Community Supported Agriculture) subscription service is a food hub although they’ve been in operation since before the term became common. Rolling Prairie Farmers Alliance was started in 1993 with help and strategic direction from the Kansas Rural Center, and is modeled on the concept of aggregating produce from multiple farms to sell directly to consumers through a CSA model.

Several studies completed in northeast Kansas between 2011 and 2014 showed a large unmet demand for local foods in northeast Kansas and the Kansas City area.  “Building a Deep-Rooted Local Food System: A Food System Analysis for Douglas County, Jefferson County & Leavenworth County in Kansas,” published in 2011, outlined a plan to address identified key issues of obesity, and lack of food access and land devoted to growing fruits and vegetables.  To address these issues and the demand for more local foods, two groups – the Douglas County Food Policy Council and the Food Policy Coalition of Greater Kansas City – conducted studies to see if the establishment of a food hub was feasible. These studies surveyed 196 growers and 121 buyers, ranging in size from small food stores to SYSCO-sized companies.  Both studies concluded a food hub could be a valuable tool in addressing demand for local products.

Inspired by this assessment, five farmers formed Farm Fresh HQ (farmfreshhq.com), a growers’ cooperative, working to aggregate and distribute produce to markets in the KC Metro area. Tom Buller, a fruit and vegetable grower and part-time KRC staff member, became a founding member of Fresh Farm HQ as he was looking to move away from retail marketing and into wholesale markets. He discussed the structure of the group in the workshop.

According to Buller, the number of members in the organization has grown to ten, and two of the owner/members operate “sub-hubs,” one in Olathe and one in Odessa, Missouri, where product is co-mingled and readied for markets. The group has support from a USDA Value-Added grant. They still face challenges of supply versus demand, balancing the needs of farmers with those of food buyers, and managing multiple location and delivery schedules. They strive to hold onto the original purpose and values of why they started the effort, while managing six key components of their Food Hub concept: Marketing and Sales, Aggregation and Delivery, Crop and Stock Planning, Food Safety Planning, Bulk Packing Supplies and Technology Training. The product line is diverse with both organic and conventional, 20 kinds of vegetables, 10 fruits, and meats.

Another food hub operating in Kansas is the High Plains Food Coop, a group of growers in far northwestern Kansas, which started in 2008. Leon Atwell is the group’s business coach through his consulting company Advancing Rural Prosperity. He described the evolution of the High Plains Food Coop at the food hub workshop at KRC’s conference. The Coop currently involves 50 producers serving 300 customers in Colorado, Kansas and Nebraska, and offering 750 products. This food hub is a “virtual food aggregator,” meaning buyers place their orders online, and then the order is delivered to different locations.

Annual sales have gone from $10,000 in 2008 to $400,000 in 2016, with growth on track to reach one million in sales in the near future.  Deliveries were originally monthly, but are now weekly. The group’s business model values community, generating revenue for producers, and the cooperative model. They often link up with other Co-ops from Colorado, New Mexico and Wyoming for product. The Co-op is required to sell 51% of its products from members.  There is a high value placed on the trust between customers, producers and the coop. The average order is $108/month, but there is no minimum order amount.

The mission of KRC, founded in 1979, is to promote the long-term health of the land and its people through research, education and advocacy that advance an economically viable, ecologically sound, and socially just food and farming system. For more information, visit www.kansasruralcenter.org.