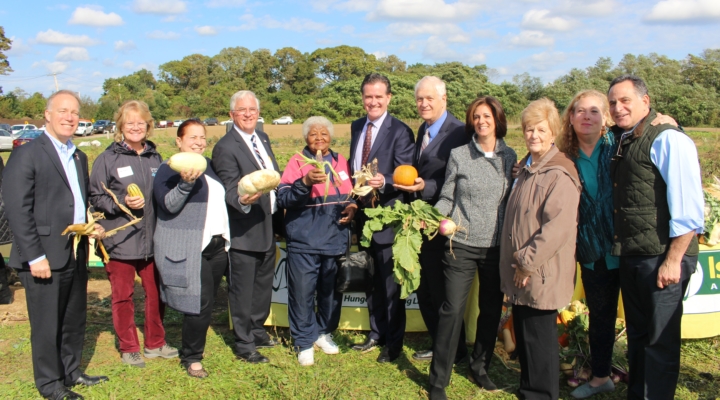 BRENTWOOD, N.Y. — Island Harvest Food Bank was joined by local hunger-relief advocates, elected officials, and community leaders recently in celebrating a 1.8-acre parcel that will be used to grow fresh fruits and vegetables to help address the issue of nutrition and food insecurity in our local communities. The land, located on a 212-acre parcel in Brentwood, is owned by the Sisters of St. Joseph, a religious order dedicated to education, health care, social justice, spirituality, empowering women and girls, and environmental conservation.

“A strong relationship between food insecurity, chronic health problems and poverty often exists because of the lack of access to fresh fruits and vegetables,” explains Randi Shubin Dresner, president & CEO, Island Harvest Food Bank. Among the health issues resulting from poor diets often cited by public health experts include diabetes, heart disease, hypertension, and obesity. “Many strategies to help the hungry tend to be short-term solutions and those who rely on typical anti-hunger programs face a lack of fresh, healthy food resulting in poor dietary choices and nutritional deficiencies. “The concept of producing locally grown, nutritionally rich, fresh fruits and vegetables are key to providing long-term and sustainable food security for the people we serve.”

“We all know how important it is for everyone, especially our youth, to have access to fruits and vegetables and this new land for Island Harvest’s Giving Gardens program will help expand their ability to deliver healthy food to those in need.  By cultivating this land, through the efforts of their dedicated volunteers, Island Harvest will help provide better choices to those they serve which will help many in our community.  I applaud Randi and her team for the work they do every single day and wish them the greatest success,” stated Senator Flanagan.

“The Sisters of St. Joseph are thrilled to partner with Island Harvest for this Giving Garden project,” said President of the Sisters of St. Joseph Sister Helen Kearney, CSJ. “This project is in perfect alignment with our ongoing commitment to both environmental sustainability and social justice so that the needs of all will be met.”

About Hunger and Food Insecurity on Long Island

Food insecurity is a state in which people do not get enough food on a consistent basis to provide the nutrients for active and healthy lives. It can result from the recurrent lack of access to food. More than 300,000 Long Islanders face the risk of hunger every day, according to Island Harvest Food Bank and Feeding America®, a national hunger-relief organization. People facing hunger include adults (often working two jobs), children, senior citizens, and veterans. Unable to make ends meet, they (and their children) are often forced to go without food. Approximately 70,000 individuals seek food assistance in Nassau and Suffolk counties each week through soup kitchens, food pantries and other feeding programs served by Island Harvest Food Bank.

About Sisters of St. Joseph

Located in Brentwood, NY, The Sisters of St. Joseph (CSJ) are the largest order of Catholic women religious on Long Island with more than 400 members, and have a 160-year tradition of ministering wherever they are needed including the Dioceses of Brooklyn and Rockville Centre, and the New York Archdioceses. United with all who minister with them, they seek to bring God’s healing and reconciling love to all through their work in education, health care, social justice, spirituality, empowering women and girls, and environmental conservation.

The motherhouse of the Sisters of St. Joseph in Brentwood includes 212 acres of land, some still pristine, acquired more than 100 years ago within the bioregion of Long Island. The Sisters affirmed a Land Ethic Statement on March 21, 2015 and, in response to the statement, members of the congregation have formed new partnerships on Long Island, gathered information about the Long Island bioregion, implemented new initiatives, and continued current ecological projects. For more information about the Sisters, please visit www.brentwoodcsj.org.