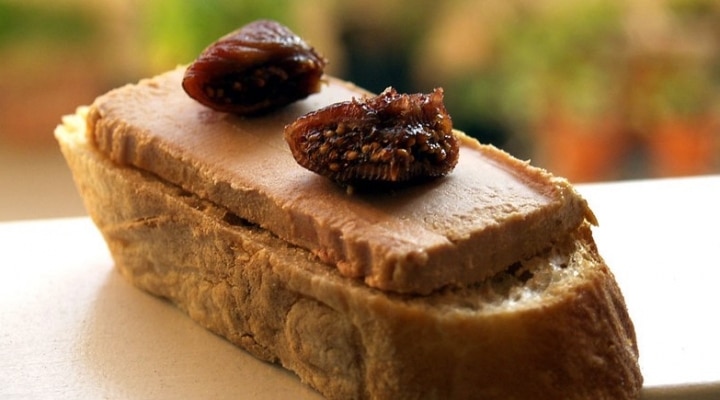 Foie gras is the fattened liver of a duck or goose. (cyclonebill, Flickr/Creative Commons)

LOS ANGELES (AP) — Foie gras is back on the menu in California after a federal judge ruled the health code doesn’t prevent the rich dish from being brought in from out of state.

California’s ban on the delicacy, the fattened liver of a duck or goose, was challenged in court by out-of-state foie gras producers who said they lost nearly one-third of their total sales when the prohibition took effect.

A federal appeals court eventually upheld the prohibition. But on Tuesday, U.S. District Judge Stephen V. Wilson decided for the plaintiffs, which include farmers in Canada and New York and a restaurant. They had challenged part of the law that banned liver produced out of state from being sold.

Wilson ruled the sale of foie gras doesn’t violate the law if the seller is outside of California and the product is given to a third-party delivery service and brought into the state.

“There is no principled way to distinguish between foie gras purchased out of state and transported into California by the purchaser and that which is delivered by a third party,” the judge wrote.

“We are gratified that the court recognized that California’s misguided ban was never intended to apply to foie gras products from out‐of‐state producers that are shipped to happy consumers in California,” said Marcus Henley, vice president of Hudson Valley Foie Gras, one of the plaintiffs.

The California attorney general’s office said it was reviewing the decision.

The issue had been simmering in courts for years since lawmakers in 2004 barred California farmers from producing the luxury pate. Animal welfare activists had campaigned for a ban on the grounds that the methods used to produce foie gras are cruel, involving force-feeding a bird a corn-based mixture through a tube slipped down its throat.

Farmers who produce foie gras — meaning fatty liver in French — say the birds are treated humanely and don’t suffer during the fattening process.