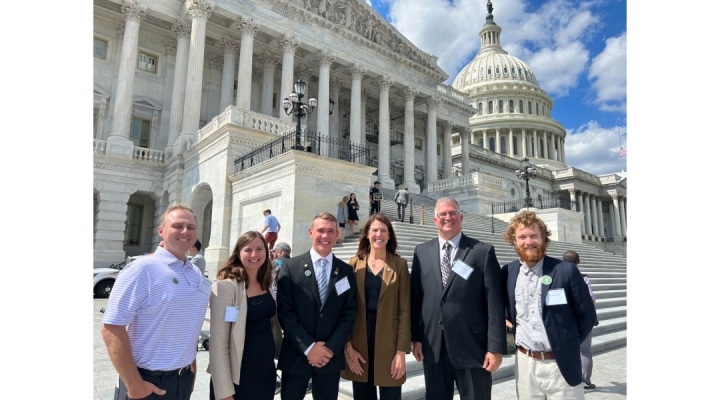 NEVADA, Iowa — Last week, five Iowa Farmers Union members made the trip to Washington, D.C., to discuss state and national policy priorities with government officials. The trip was part of a National Farmers Union Fly-In effort with over 250 farmers from around the nation coming together to bring experiences from their farms and rural communities to life in the nation’s capital.

Iowa’s delegation met with agricultural policy directors from all six of Iowa’s elected officials in Congress, including face-to-face visits with Senators Chuck Grassley and Joni Ernst and a meeting on the steps of the Capitol with Representative Cindy Axne while the House was in session.

IFU member Haleigh Summers remarked about the importance of direct advocacy. “Our voices are louder when we are united,” said Summers. “Fly-Ins help constituents across the country to share a centralized message with their representatives, furthering the strength of that message.”

All of Iowa’s legislators are excited about Farmers Union priorities, including the potential for further increased biofuel production with the Next Generation Fuels Act (S.4621 and H.R. 5089) and the possibility for increased local and regional food production and marketing capacity being written into the 2023 Farm Bill. Other topics ranged from Fairness for Farmers initiatives like the Agricultural Right to Repair Act (S.3549) and the Cattle Price Discovery and Transparency Act (S.4030 and H.R.7639) to Farm Bill priorities including strengthening the Farm Safety net to reflect higher prices and input costs and expanding permanent disaster relief programs so that family farmers are able to bounce back quickly from severe weather events.

On Tuesday, September 13th, Iowa Farmers Union President Aaron Lehman was invited to join thousands of other supporters from across the country at the White House as President Biden celebrated the passage of the Inflation Reduction Act (IRA), a landmark piece of legislation for agricultural conservation, amongst many other things.

“The IRA is the largest investment in conservation since the Dust Bowl,” Lehman said. “This is a massive win for Farmers Union priorities.  We have long advocated for paying farmers for their climate smart contributions.  Along with other USDA investments, this represents a huge investment and partnership in Iowa farmer innovation.”

In addition, the IFU delegation attended meetings with the Federal Trade Commission (FTC) and Commodity Futures Trading Commission (CFTC), briefings with the House and Senate Agriculture Committees, and a White House Administration Briefing in the Eisenhower Executive Office Building.