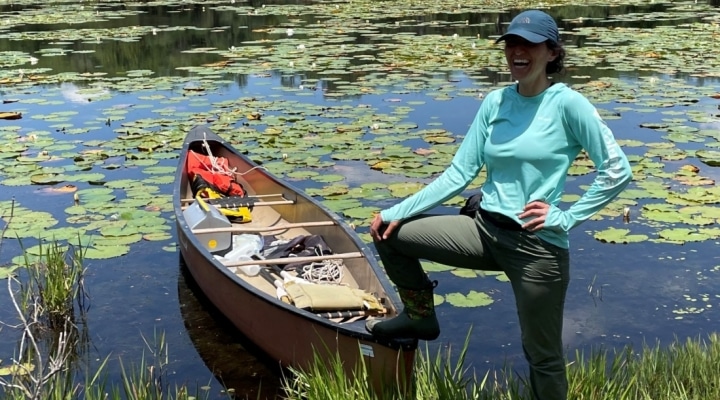 When you look at ponds, you might see birds and fish, but you probably don’t think about carbon. In fact, Florida’s 76,000 ponds store plenty of carbon, and a lot of it escapes into the atmosphere. (photos courtesy, Audrey Goeckner, UF/IFAS)

GAINESVILLE, Fla. — When you look at ponds, you might see birds and fish, but you probably don’t think about carbon. In fact, Florida’s 76,000 ponds store plenty of carbon, and a lot of it escapes into the atmosphere.

In fact, ponds lose more carbon via gas than they store in the muck, a new University of Florida study found.

“That finding means some ponds are doing us an ecosystem ‘disservice,’” said Mary Lusk, a UF/IFAS assistant professor of soil and water sciences. “Globally, we expect that as urbanization continues, there will be more and more of these small man-made ponds in urban landscapes.”

This research will inform scientists’ attempts to estimate how much carbon is entering the atmosphere from these ponds on a regional basis, said Lusk, a faculty member at the UF/IFAS Gulf Coast Research and Education Center. 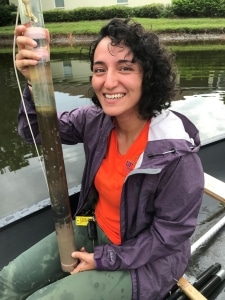 “Then, once people start to understand that better, we hope they will take stormwater ponds into account for policies related to carbon control,” she said. “Stormwater ponds are everywhere in Florida. But they are understudied in terms of how they are impacting local ecosystems. Because they are man-made parts of the landscape, they sort of get overlooked, and people might assume they’re not very important ecologically.”

The sheer number of ponds compelled Lusk to study if they could have larger environmental effects than people think. She originally wanted to focus on nitrogen and phosphorus in ponds, but one of her graduate students, Audrey Goeckner, wanted to study carbon.

“When I learned that I had the chance to work in stormwater ponds, similar to what I had grown up in around in my neighborhood, I immediately asked myself, well what about these little urban ponds? How do they compare to other aquatic ecosystems?” asked Goeckner, now a Ph.D. student in soil and water sciences on the main UF/IFAS campus in Gainesville. “Turns out that despite their small size, they can rapidly store and process carbon, which adds up when you consider how many of them exist in developed landscapes and how many continue to be built.”

For the study, done as part of her master’s thesis at GCREC, Goeckner designed a way to measure the amount of carbon leaving ponds. Although Goeckner studied ponds in Manatee County, her findings hold implications for pond carbon emissions globally.

Goeckner took two canoes (attached to each other) into the ponds. She and a lab technician each sat in one canoe to balance the weight. Goeckner then collected muck from the bottom of the ponds and measured the depth of muck above a sandy layer of sediment, indicating when the pond was constructed and the amount of organic carbon stored in it.

That’s how Goeckner found the amount of carbon buried in the  ponds.

Secondly, she modified a chamber that is normally used to measure greenhouse gases — carbon dioxide and methane — from soil. Instead, Goeckner used the chamber to measure these gases from the surface of the ponds.

She found the quantity of these gases that escapes from the ponds each year, and then compared carbon stored in the pond muck vs. carbon lost via gaseous loss. As a result, scientists now know that ponds give off more carbon than they store and that the amount lost changes over the lifetime of a pond.

As Florida continues to grow, it’s going to become more urbanized. With new development often comes new stormwater ponds, which are not as good at storing carbon as older ones, Lusk said.

As ponds age, their sediment and biogeochemical properties may promote the amount of carbon stored, rather than emitted as a gas, Goeckner said. That translates to better storage efficiency of organic carbon that enters the water.

“Our results suggest that when they’re new, they emit large proportions of carbon from the landscape and potentially increase storage over time,” Lusk said. “This means the older ponds are doing less of an ecosystem disservice to us than the younger ponds. But if you think about the rate of new housing development in Florida, and how fast new stormwater ponds are being built in all that new development, it means we will always have a fresh new batch of young ponds that are just pumping carbon out to the atmosphere.” 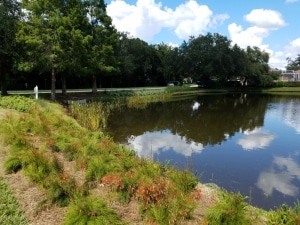 GAINESVILLE, Fla. — For years, scientists questioned the ability of stormwater ponds to keep nutrients out of lakes and rivers. Turns out, they were right to be suspicious, new University of Florida research shows Stormwater ponds are built to prevent soil erosion and flooding. They’re also considered a Best Management Practice, or BMP, to reduce […] 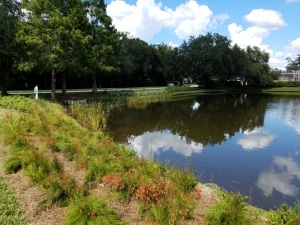 GAINESVILLE, Fla. — Florida teems with rain. Depending on where you live, you might get 40 to 60 inches annually. That rain must go somewhere. Enter Florida’s 76,000 stormwater ponds. When it rains, the water runs off the land, bringing chemicals, grass clippings, lawn debris and more from the landscape into these ponds. Yet little […]