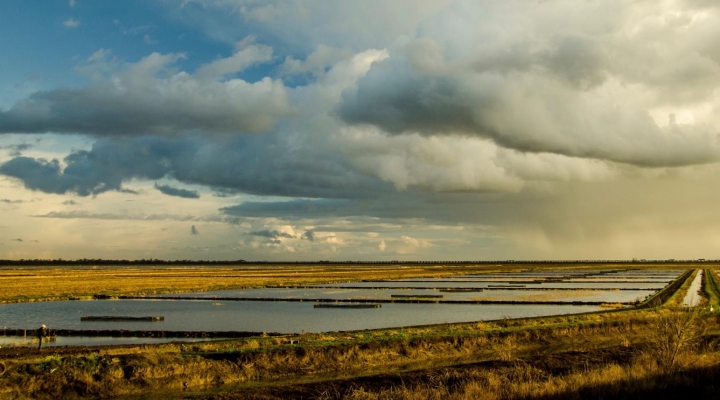 DAVIS, Calif. — A new study offers a beacon of hope for a cease-fire in the Golden State’s persistent water wars.

“Floodplain Farm Fields Provide Novel Rearing Habitat for Chinook Salmon,” published in the journal PLoS ONE, is based on the work by scientists from nonprofit group California Trout, UC Davis, and the California Department of Water Resources. The study provides further evidence that Central Valley farm fields that remain in active agricultural production can have environmental benefits for the state’s salmon populations.

This surprising synergy runs counter to the usual California narrative where conflict over management of water and endangered species is the norm. This is particularly true in the State’s Central Valley, where more than 95 percent of former wetlands — critical habitat for native fish populations — have been leveed, drained and developed, primarily for farmland.

FOOD FOR FISH AND PEOPLE

“This study demonstrates that the farm fields that now occupy the floodplain can not only grow food for people during summer, but can also produce food resources and habitat for native fish like salmon in winter,” said lead author Jacob Katz of California Trout. “Our work suggests that California does not always need to choose between its farms or its fish. Both can prosper if these new practices are put into effect, mimicking natural patterns on managed lands.”

Approximately 10,000 small, hatchery-reared salmon, averaging less than 2 inches and weighing about a gram, were transplanted to a 5-acre field for several weeks between the fall rice harvest and spring planting. A subsample of the fish were tagged uniquely with electronic tags (similar to chips used to ID pets) to allow tracking of individual growth rates, which were among the highest ever recorded in freshwater in California.

“By reconnecting rivers to floodplainlike habitat in strategic places around the Central Valley, we have the potential to help recover endangered salmon and other imperiled fish populations to self-sustaining levels,” said Ted Sommer, lead scientist for the California Department of Water Resources and a co-author on the study.

Since 2012, a team of scientists has been examining how juvenile salmon use off-channel habitats, including off-season rice fields. The experiments provide evidence that rice fields managed as floodplains during winter can create “surrogate” wetland habitat for native fish.

The team suggests that shallowly flooded fields function in similar ways to natural floods that once spread across the floodplain, supplying extremely dense concentrations of zooplankton — an important food for juvenile salmon. Foraging on these abundant and nutritious invertebrates, the young salmon grow extremely quickly, improving their chances of surviving their migration to sea and returning in three to five years as the large, adult fish.

Since this original study, the team has continued to investigate how rice fields and other managed habitats could be improved to support salmon rearing.

“This study shows that we can start focusing on solutions that support fish and people, instead of one or the other,” added Carson Jeffres of the UC Davis Center for Watershed Sciences, the second author on the report. “It’s a huge win-win.”

—University of California – Davis
via EurekAlert!