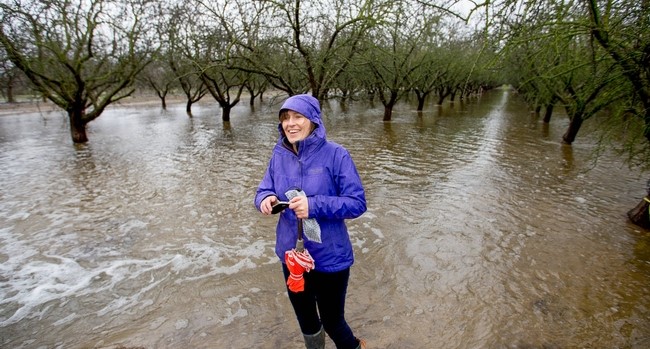 The alfalfa research is the latest in a series of projects studying the effects of using land planted with permanent crops – including almond orchards and vineyards – to capture and bank winter storm water. Such projects have great promise but also require collaboration across multiple jurisdictions and agencies. UC Agriculture and Natural Resources vice president Glenda Humiston has made groundwater recharge on working lands and open spaces a division priority and is working with water and land use leaders around the state to facilitate it through policy recommendations and cross-agency collaboration.

Groundwater is a critical water reserve in California, particularly during droughts when surface water supplies are low. Water slowly filled California’s aquifers over tens of thousands of years. Beginning in the early 20th century and continuing in the present day, groundwater has been consistently withdrawn at a higher rate that it can be replenished naturally. In 2014, the California Legislature enacted the Sustainable Groundwater Management Act, which requires all critically overdrafted groundwater basins to have a groundwater sustainability plan in place by 2020.

Flooding agricultural land during the winter, when surplus surface water is often available, is one promising strategy for replenishing overdrafted aquifers.

View a four-minute video about on-farm flooding for groundwater recharge on the UCTV Sustainable California channel. In the video, Professor Helen Dahlke discusses the work she and her fellow UC Davis researchers, UC Cooperative Extension advisors and specialists, and California farmers are undertaking to test the impacts of irrigating almond orchards in the winter to recharge groundwater.

For the alfalfa flooding research, UC Davis and UC Cooperative Extension scientists flooded two established alfalfa stands, one near Davis and one in the Scott Valley, Siskiyou County, during the winters of 2015 and 2016. The sites were selected because the soils in those areas have relatively high water percolation rates.

“We found that most of the applied water percolated to the groundwater table,” wrote lead author Helen Dahlke, integrated hydrologic science professor at UC Davis.

The alfalfa endured saturated conditions in the root zone for a short time, but the yield loss was minimal.

Dahlke and her co-authors – USDA Natural Resources Conservation Service soil scientist Andrew Brown, and UC Cooperative Extension specialists Dan Putnam and Toby O’Geen and the late UCCE advisor Steve Orloff  – noted that the positive results of the alfalfa trial show tremendous potential for the state’s groundwater basins. Using an index created by O’Geen that identifies the locations of California soils suitable for on-farm groundwater recharge, the scientists calculated the potential groundwater recharge. If all the suitable alfalfa acreage were flooded with six feet of winter water, and assuming 90 percent percolates past the root zone, it would be possible to bank 1.6 million ac-ft. of groundwater per year.

“For reference, the Oroville reservoir, second largest in the state, has a storage capacity of 3.5 million ac-ft.,” Dahlke wrote.