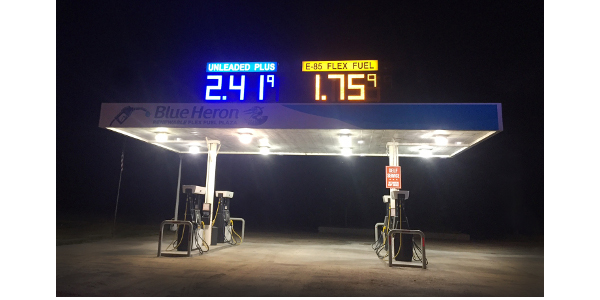 Blue Heron is the only fuel station in Gothenburg with flex fuel pumps offering a variety of cleaner-burning ethanol blends. (Courtesy of Nebraska Ethanol Board)

GOTHENBURG, Neb. — Flex fuel vehicle drivers can take advantage of huge savings on E85 for just $0.85 a gallon at the Gothenburg Blue Heron Renewable Flex Fuel Plaza (1102 S. Lake Ave.) Thursday, Sept. 28, from 10 a.m. to 1 p.m. Consumers will be limited to 30 gallons and no containers are allowed.

Lt. Governor Mike Foley, state officials and the Gothenburg Chamber of Commerce will kick off the ribbon cutting at 9:30 a.m. to mark the grand opening of the new flex fuel pumps. Complimentary refreshments will be available to customers throughout the promotion. Nebraska Ethanol Board, Nebraska Corn Board and local corn growers will be on site greeting drivers, pumping fuel, and providing giveaways.

Blue Heron is the only fuel station in Gothenburg with flex fuel pumps offering a variety of cleaner-burning ethanol blends. The flex fuel pumps now dispense E10, E15, E30, E40 and E85. The station is also strategically located along Interstate 80 (exit 211) and Highway 47.

“There was a need and an opportunity to provide more ethanol blends at a great price in central Nebraska,” said Scott McPheeters, Nebraska Ethanol Board member and Gothenburg farmer. “Blue Heron is a great location to attract business from the more than 15,000 vehicles a day traveling on Interstate 80.”

In addition to state and federal grant support, ethanol producers in central Nebraska have chipped in to support Blue Heron. KAAPA Ethanol in Minden, Nebraska, sponsored fuel canopy and billboard upgrades for the station, while Nebraska Corn Processing and Anew Fuel Services in Cambridge, Nebraska, provided ethanol at a discounted price for the grand opening.

“There has been great collaboration between public and private entities to make this station a success,” said Megan Grimes, Nebraska Ethanol Board program manager. “We applaud Blue Heron for providing consumers more choice and offering cleaner-burning, homegrown fuel at a lower cost.”

A portion of Blue Heron’s fuel pump upgrades were paid for with the Access Ethanol Nebraska (AEN), a grant program administrated by the Nebraska Corn Board, Nebraska Ethanol Board and Nebraska Department of Agriculture, with the Nebraska Energy Office as the lead agency. Nebraska’s federal award of approximately $2.3 million for the AEN program came from the USDA’s Commodity Credit Corporation’s Biofuel Infrastructure Partnership (BIP). USDA rules require that the USDA funds be matched dollar for dollar with funds from state, private industry or foundations. Matching funds will come from the Nebraska Corn Board through the state corn checkoff funds paid by Nebraska corn farmers and from the Nebraska Environmental Trust approved funding of $500,000 for each of the two years. Matching funds will also come from contributions made by individual ethanol plants and “Prime the Pump,” a nonprofit organized and funded by the ethanol industry to improve ethanol infrastructure.