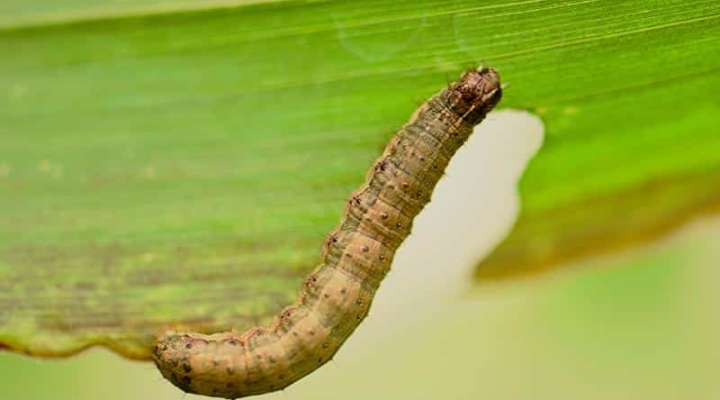 Flavonoids produced by sorghum leaves have shown promising results in combating fall armyworm larvae. When sprayed on the leaves of corn, sorghum flavonoids stunt the growth of fall armyworm and often kill the pest, Penn State researchers report in a new study. (photo by Penn State)

The results of the research are important, according to Surinder Chopra, professor of maize genetics, because fall armyworm is an invasive insect pest that now damages corn crops around the world, significantly limiting yields. He suggests that flavonoids can be used as the basis for a nontoxic pest-management strategy to protect corn.

Plant flavonoids are natural compounds that often are seen as pigments in some flowers, vegetables and fruits. Flavonoids normally are considered nonessential byproducts of a plant’s primary metabolism that produces sugars and other metabolites that work together to produce seed yield.

“When you survey the leaves and other parts of commercially grown corn, you do not see production of these flavonoids anymore,” he said. “These compounds were naturally present at one point until we started breeding against them. Actually, we did not breed against them so much as we just lost them trying to develop higher-yielding varieties.”

For two decades, Chopra’s research group in the College of Agricultural Sciences has studied mutant lines of corn that overproduce the flavonoids and has developed new lines that combine flavonoid overproduction with other desirable traits. And his lab has taken the gene that produces a precursor compound of flavonoids in sorghum and inserted this gene into corn to make more resilient plants that can discourage feeding by fall armyworms and possibly other pests.

Fall armyworm caterpillars are so destructive because they often feed on the younger corn leaves inside the whorl where they grow, Chopra explained. They stay inside the whorl gorging, and when the whorl opens, the young leaves already are destroyed.

In this study, the researchers demonstrated in a three-part experiment that sorghum and corn flavonoids affect survival of fall armyworm larvae. Their findings, recently published in the Journal of Pest Science, revealed that fall armyworm larvae reared in the lab on an artificial diet supplemented with sorghum flavonoids showed significant mortality and decreased larvae body weight.

“The feeding assays showed significantly high mortality of larvae that were fed on flavonoid-producer lines compared to nonflavonoid lines or the wild types,” Chopra said. “And significantly less damage was done to corn plants producing flavonoids than to flavonoid-free corn.”

Penn State entomologist Gary Felton, who has been collaborating on this research with Chopra, noted that when fall armyworms ingest flavonoids, their intestinal tract is degraded.

“The membrane that protects the caterpillar’s gut was severely damaged in larvae fed on leaves of flavonoid-producer corn lines, compared to wild types,” he said. “The effectiveness of the flavonoids as feeding deterrents demonstrates the eco-friendly potential for the management of fall armyworm larvae.”

Also contributing to this research at Penn State were Debamalya Chatterjee and Tyler Lesko, doctoral degree candidates in the Department of Plant Science; Michelle Peiffer, research support assistant, Department of Entomology; and Dinakaran Elango, a previous graduate student of Chopra’s and now at the Department of Agronomy, Iowa State University. Julien Beuzelin, of the Everglades Research and Education Center, University of Florida, also was a member of the research team.