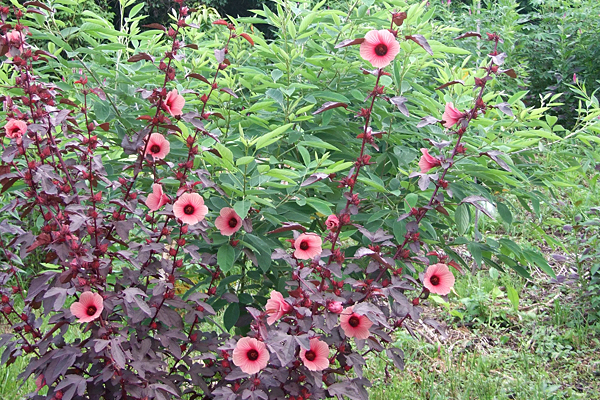 Craig, 31, a native of Lakeland who tamed a 2-acre spread just outside Winter Haven, expanded his collection to include other exotic species of leafy plants like red leaf cranberry hibiscus. (Wikimedia Commons)

LAKELAND, Fla. (AP) — Jared Craig has a nose for exotic flora. As a home gardener, he thumbed that nose at the litany of humdrum edibles.

He said no to the lettuces that monopolize grocery space — bibb, endive, butterhead, Romaine and the rest — choosing instead to concentrate on unusual greens like Rungia klossii, often called the mushroom plant, an herb rich in nutrients with leaves that taste like mild mushrooms.

Craig, 31, a native of Lakeland who tamed a 2-acre spread just outside Winter Haven, expanded his collection to include other exotic species of leafy plants like red leaf cranberry hibiscus. The plant’s leaves, similar in shape to those of a maple, are deep purple in color and taste like a cross between citrus and cranberry. It produces flowers that also are edible.

His garden grew to include all manner of fruits, herbs and other edibles, so much so that a hobby has turned into a thriving enterprise with help from Craig’s girlfriend, Brittany Bandi, 28.

The two met three years ago and have since become partners in life and business. Their mail-order nursery, Sow Exotic, offers dozens of varieties of plants, including those used for medicinal purposes, like aloe and Echinacea, or for decoration, with succulents and cactus.

The couple does offer private tours of their sprawling gardens, where plump, red and yellow mangoes share space with a tropical species of pomegranate named Vietnamese pink that’s especially tolerant of moisture and produces fruit much of the year.

“It’s not our primary business, yet,” said Bandi, traipsing through high grass, her orange tabby, Steve, not far behind.

She reaches to pluck a gorgeous, red-and-yellow Barbados or acerola cherry from its bough, offering it up for sampling. The firm flesh, much like that of a Bing cherry, is mildly tart and citrusy.

The fruit is valued throughout Central and South America as a powerful antioxidant, high in vitamin C. The cherries can be eaten fresh, but often are crushed and seeded for their juice, which can be used for jellies or blended into smoothies.

“You’re never going to find the fruit in a store,” said Craig, a slim reed of a man who opened his online nursery business in March 2016. He and Bandi, along with Craig’s 7-year-old son, George, also raise chickens for food.

The family literally is surrounded by a cornucopia of goodies — tiny-but-potent Everglades tomatoes, bursting with flavor, and Peruvian apple cactus, a hedge variety that produces colorful, knobby fruit said to approximate the flavor of dragon fruit, a related species.

Craig and Bandi are fond of making a sweet, syrupy ice cream topping from Florida cranberry, which isn’t a cranberry at all, but a relative of hibiscus and okra that tastes much like the small, red berries synonymous with Thanksgiving.

The flower-like fruit of the Florida cranberry, also known as red sorrel or roselle, has dozens of culinary uses for its tart, fruity flavor. Soaked in sugar syrup, they make a beautiful garnish for cocktails. Just place in the bottom of a Champagne flute and fill with your favorite bubbly.

The tulip-shaped fruit, which grows at the base of the Florida cranberry’s blossoms, is deep crimson in color. The dried form is marketed as hibiscus tea. The fruit, or calyx, is a good source of calcium, niacin, riboflavin, iron, antioxidants and Vitamin C, according to the Florida Cranberry Alliance.

“It all started with Jared’s obsession with growing tropical plants,” said Bandi, who soon will launch a mobile nursery from a re-purposed 1997 Bluebird bus that she and Craig purchased from Busch Gardens. They intend to sell their wares at special events and farmers markets.

Craig’s inner-entrepreneur is focused on selling the benefits of growing your own food, things not readily available at the local grocer.

“It’s about growing and gardening,” he said, “and wanting to just walk outside (your home) and pick stuff and eat it. Every day.”

Farm Bureau office to close today due to Irma