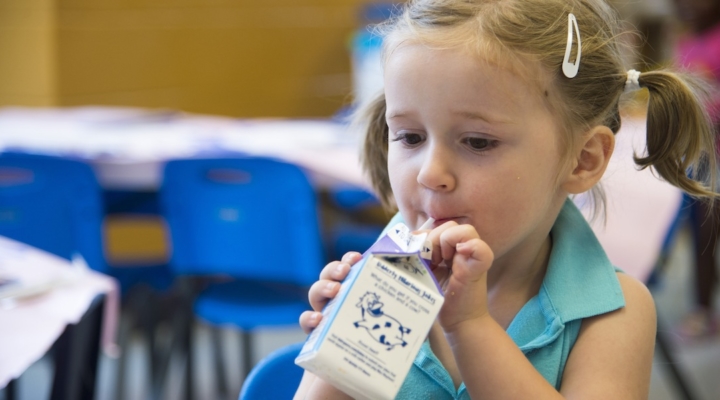 Fve districts in Broome and Tioga Counties—Chenango Valley Central School District, Johnson City Schools CSD, Tioga CSD, Vestal CSD, and Whitney Point CSD—will serve fruits, vegetables, dairy products and meats sourced from farms and processors in the Southern Tier and from across the State to more than 10,000 students on the second Thursday of every month. (U.S. Department of Agriculture, Flickr/Creative Commons)

“By launching NY Thursdays upstate, we are promoting the use of healthy, local foods in schools across New York to serve more nutritious food to our students, but also to open new markets for farmers,” said Governor Cuomo. “I encourage other schools to join the NY Thursdays lunch program, which is helping to boost the agricultural industry and create a stronger, healthier New York for all.”

Tioga Central School District kicked off the program today, celebrating the NY Thursdays initiative and the Broome-Tioga BOCES’ commitment to increase their purchasing of foods from community growers and producers. Students participated in several hands-on educational activities to learn about the state’s various agricultural commodities, and the district showcased its on-site garden where students are growing their own vegetables, including corn, pumpkins and potatoes. Today’s NY Thursdays lunch included: chicken spiedies (processed at Lupo’s in Broome County), New York made whole wheat roll from Freihofer’s, apples from Lone Maple Farms, corn from Our Green Acres Farm, milk from Byrne Dairy and potatoes grown on the school campus.

Mark Bordeau, Senior Food Service Director, Broome-Tioga BOCES, said, “Broome Tioga BOCES is very excited and proud to be doing NY Thursdays in the Southern Tier. NY Thursdays is creating great relationships between our schools and the agriculture community. It takes a total team effort to achieve success. We are committed to providing the highest quality foods to our students to ensure good health and at the same time address food insecurities. The Farm-to-School Connection helps achieve goal.”

Erin Summerlee, Food and Health Network Director, Rural Health Network of South Central New York, said, “Launching the NY Thursdays lunch program is the result of over five years of close collaboration to build relationships, infrastructure, and capacity for a sustainable farm-to-school program. The new menu program not only involves partnering with more farms and processors to offer new recipes and local food to students, but also provides an opportunity to integrate classroom and cafeteria education and involve the entire school and community in connecting with their regional food system.”

The NY Thursdays program was first started in New York City in 2015. The Department of Agriculture and Markets’ partnership with the school system downstate has led to the program being replicated upstate. To support the launch of the program in the Southern Tier, the State has provided $74,970 in New York State Farm-to-School funding to Broome- Tioga BOCES in 2015 and $89,023 to the Rural Health Network of South Central New York in 2016. The funds are being used to purchase equipment, identify and purchase specialty crops from farms certified by the USDA’s Good Agricultural Practices program, and to help make cafeteria equipment and design improvements that are in line with Cornell Smarter Lunchroom research. Cornell Cooperative Extension of Broome County is assisting with outreach to local farms and food co-ops to educate more farmers on GAP certification and Cornell’s training program.

Victoria Giarratano, Executive Director, Cornell Cooperative Extension of Broome County said, “The NY Thursdays program is just one more opportunity for local producers to make a connection with a growing market opportunity, as well as the population who will be shaping purchasing decisions in their family. Exposing our youth to fresh and local fruits, vegetables and proteins will provide the triple benefit of nutrition, awareness of local agriculture and additional economic impact for our community. Cornell Cooperative Extension of Broome County was honored to be a part of this process in providing food safety training and technical assistance to grow the number of farms who can now sell through farm to school as well as the Smarter Lunchrooms reaching students through education and taste-testing.”

State Agriculture Commissioner Richard A. Ball said, “We know that by feeding our students well, right from the start, we’re helping to educate them on the benefits of a healthier diet. We’re also making sure they know where their food comes from and introducing them to the farmer who grew and produced the fruits, vegetables and dairy products on their plates. Launching the NY Thursdays program in Upstate New York is a huge step in our mission to connect the dots between consumers and New York’s producers to further grow our agricultural industry.”

OGS Commissioner RoAnn Destito said, “Governor Cuomo has made bringing New York State products to the tables of NYS school children an important part of his commitment to our farmers and food producers. As a result, with 18 vendors, New York State leads the nation in the number of producers participating in the USDA Pilot Project for the Procurement of Unprocessed Fruits and Vegetables.”

The Farm-to-School Program is a major component of the State’s ongoing efforts to increase the amount of fresh, local foods served in schools and to connect New York’s farmers to new markets. Since 2015, the New York State Department of Agriculture and Markets has been a partner in the NY Thursdays program that brings locally grown or produced foods directly to students in New York City schools every Thursday. In 2016, the Department assisted NYC SchoolFood with the expansion of its program to add 100 percent New York beef hamburgers to the school lunch menu. Two Farm-to-School projects, including the Southern Tier Farm-to-School program, awarded last year are helping school districts replicate and strengthen the NY Thursdays program in Upstate New York and in the Bronx.

The New York State Office of General Services has also been a partner in the expansion of the Farms-to-School programs through the USDA Unprocessed Fruit and Vegetable Pilot Project. OGS recently announced that school districts across the state have made a commitment to dedicate $3.5 million in U.S. Department of Agriculture funds toward the federal agency’s Pilot Project for the Procurement of Unprocessed Fruits and Vegetables during the 2017-18 academic year. The pilot began with six school districts committing approximately $10,000 in USDA funds to purchase unprocessed fruits and vegetables, including apple slices, frozen broccoli and salad mixes. The number of schools participating for the 2017 to 2018 school year has grown to 272 schools serving over 56.1 million lunches annually.

In addition to financial assistance, online educational resources are now available for schools and organizations currently participating in a Farm-to-School initiative and those looking to implement programs. The Getting Local Food Into New York State Schools is a toolkit that guides schools through the local procurement process. In addition, the Harvest of the Month toolkit offers strategies for starting and promoting the Harvest of the Month campaign, which highlights a different locally grown food in the school cafeteria each month through educational materials and activities such as posters, cooking demonstrations, and taste tests. These resources can be found on the State’s Farm-to-School website here.

Senator Patty Ritchie, Chair of the Senate Agriculture Committee, said, “By putting more local foods in school lunchrooms, we are not only providing a boost to New York’s hardworking farmers—we’re also helping to improve student health and teaching young people about the importance of agriculture,” said Senate Agriculture Committee Chair Senator Patty Ritchie. “I would like to thank Governor Cuomo and Commissioner Ball for recognizing how critical it is that we continue to work toward these goals and join them in encouraging additional school districts to participate in this program.”

Senator Fred Akshar said, “It’s so refreshing to see government officials from top to bottom, educators and business owners all working together to support local agriculture and provide nutritious food to our community’s children. Like our Agriculture in the Classroom partnership with local schools in the 52nd District, this is another way to connect our local agriculture industry to the next generation and help our kids appreciate where their food comes from.”

Assemblymember William Magee, Chair of the Assembly Agriculture Committee, said “It is exciting to see that these schools are committed to bringing wholesome, fresh, locally produced foods to their lunch programs! The NY Thursdays Initiative and the Farm to School Program encourage children to appreciate foods grown and raised locally and support healthy, seasonal diets while boosting the local farm economy.”

Assemblymember Donna A. Lupardo, “This exciting initiative will allow students to learn more about where their food comes from through new nutritious meal options, while also creating new opportunities for local producers. I appreciate the continued commitment from the Governor and the Department of Agriculture and Markets to grow this industry by expanding into new markets.”

Broome County Executive Jason Garnar said, “Broome-Tioga has been a leader in the farm-to-school movement, working to bring fresh, local food to thousands of students across the region. Now, they’re taking their commitment to sourcing from local farms and businesses to the next level with the launch of the NY Thursdays program. I thank Governor Cuomo for his support of the Farm-to-School program and congratulate Broome-Tioga BOCES and its partners for launching this initiative, which will not only provide a boost to our farmers but will also help educate our students about eating healthy.”

Town of Tioga Supervisor Lewis Zorn said, “Tioga Central School District has been tremendously successful in its efforts to bring agriculture and healthy foods to its students and to make it fun. The students are taking an active role in growing their own food and the staff is excited to make new connections with the area’s growers and processors. Through NY Thursdays, the district will be able to build on these efforts and expand the program to even more students in the Southern Tier.