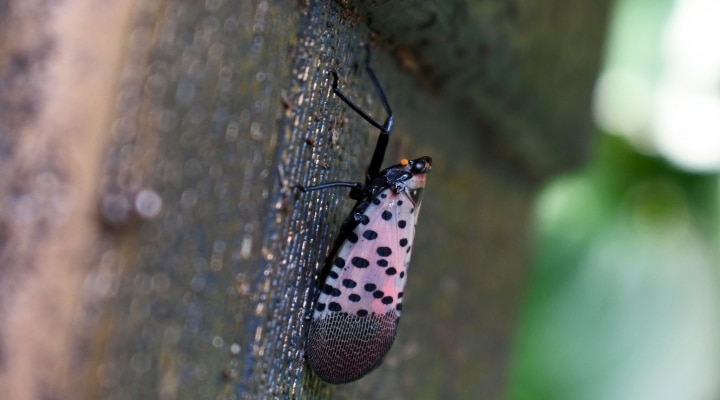 Even before the recent news of the season’s first confirmed spotted lanternfly hatches in the Philadelphia region, homeowners in many parts of Pennsylvania were gearing up for their annual battle with the destructive pest. (photo by Brian Henderson, creative commons/flickr.com)

UNIVERSITY PARK, Pa. — Even before the recent news of the season’s first confirmed spotted lanternfly hatches in the Philadelphia region, homeowners in many parts of Pennsylvania were gearing up for their annual battle with the destructive pest.

“It’s bad enough that people are dealing with stresses associated with the coronavirus pandemic,” said Heather Leach, spotted lanternfly extension associate in Penn State’s College of Agricultural Sciences. “The yearly invasion of the spotted lanternfly, an insect that takes time, energy and money to keep under control, will cause more troubles for some folks.”

The pest, which feeds on the sap of grapevines, hardwoods and ornamentals, strikes a double blow — not only does it stress host plants, but it also can render outdoor areas unusable by leaving behind a sugary excrement called honeydew, which attracts other insects and promotes the growth of sooty mold. The only consolation is that the insects do not bite or sting, nor do they cause structural damage.

Despite not being a native species — it is native to central Asia — the spotted lanternfly seems well adapted to the climate of the northeastern U.S. It now has been reported in 26 Pennsylvania counties and in several neighboring states.

The insect has established a life cycle that completes one generation each year. It begins in late summer when adults mate and lay eggs — gray-colored, flat clusters that resemble mud — on a variety of surfaces. While those adults do not survive the winter, the same does not hold true for their egg masses, which are hardy enough to withstand brutal weather conditions.

“And since we had a mild winter in Pennsylvania, we suspect even more egg masses survived, which, unfortunately, means there likely will be more spotted lanternflies this summer,” Leach said.

The hatching eggs reveal nymphs with black and white spots. As they enter their “teens,” most of the insects’ black markings will turn red. By mid-summer, the nymphs will become adults, measuring about an inch in length and sporting artfully patterned wings of red, black, white and tan, accented by dots.

Throughout the transformation, one thing remains constant — their voracious appetite, and that has homeowners scrambling to find ways to control the clusters that have taken up residence on their properties.

To aid homeowners in reducing spotted lanternfly populations, Penn State Extension has developed a free webinar series. These how-to videos can be found at https://extension.psu.edu/spotted-lanternfly-management-resources.

In addition, Leach provided the following recommendations based on life cycle and season:

Walk around your property to check for egg masses on trees, cement blocks, rocks and any other hard surface. If you find egg masses on your property from September to April, scrape them off using a plastic card or putty knife, and then place the masses into a bag or container with rubbing alcohol. However, if you do not have rubbing alcohol, you also can smash or burn egg masses that have been removed from trees, Leach pointed out.

When the nymphs first hatch, they will walk up the trunks of trees to feed on the softer, new growth of the plant. Leach advises taking advantage of this behavior by wrapping sticky tape around tree trunks and trapping the nymphs. “It is essential to tape trees in the spring when spotted lanternflies are nymphs because many of the adult insects will avoid the tape,” Leach said.

She also notes that the traps should be caged in wire to prevent birds and small mammals from becoming stuck to the tape. Sticky tape can be purchased from hardware stores or garden centers and often is sold as flypaper.

Removal of tree-of-heaven — spring and summer

While the spotted lanternfly will feast on a variety of plant species, it has a fondness for Ailanthus, or tree of heaven, an invasive plant that is common in landscape plantings, agricultural areas and along the sides of roads. For this reason, there is a current push from spotted lanternfly officials to remove this tree.

Leach said the best way to do this is to apply an herbicide to the tree using the hack-and-squirt method, a critical step to prevent regrowth, and cutting it down from July to September. Even when treated, multiple applications may be necessary over time to kill the tree, she emphasized.

Use of insecticides — spring, summer and fall

When dealing with large populations of the insect, homeowners may have little recourse other than using chemical control. When applied properly, insecticides can be an effective and safe way to reduce lanternfly populations. Penn State Extension currently is researching which insecticides are best for controlling the pest; preliminary results show that those with the active ingredients dinotefuran, imidacloprid, carbaryl, bifenthrin and natural pyrethrins are among the most effective.

However, there are safety, environmental and sometimes regulatory concerns that accompany the use of insecticides, so Leach advises homeowners to do research, weigh the pros and cons, and seek professional advice if needed. She warned against the use of home remedies, such as cleaning and other household supplies, as they can be unsafe for humans, pets, wildlife and plants. In some cases, the application of home remedies may be illegal.

Finally, Leach asks all citizens to help stop the insect’s spread by checking their vehicles carefully — undercarriages, windshield wipers, wheel wells, luggage racks and such — for spotted lanternflies and egg masses before traveling in and out of the quarantined counties.

More information about how to identify and control spotted lanternfly, how to report an infestation, and how to comply with quarantine regulations is available on the Penn State Extension website at https://extension.psu.edu/spotted-lanternfly.

Cloth Face Coverings vs. Respirators: What’s the difference and when should we use them?

Saddle up! The Equine Experience is back at Ag Progress Days
July 22, 2021