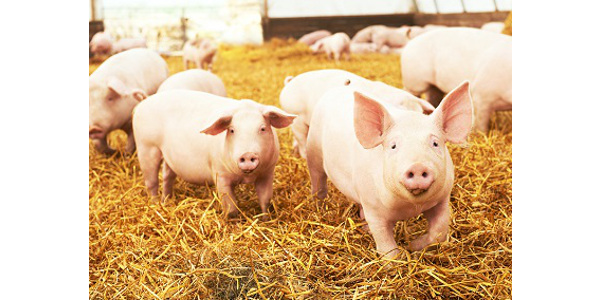 A shipment of breeding pigs from Kentucky, took off for Sao Paulo, Brazil, the afternoon of Nov. 11 representing the first load to utilize the Livestock Export and Inspection Facility (LEIF) at St. Louis Lambert (STL). (Courtesy of ISU Extension and Outreach)

ST. LOUIS, Mo. — A shipment of breeding pigs from Kentucky took off for Sao Paulo, Brazil, the afternoon of Nov. 11 representing the first load to utilize the Livestock Export and Inspection Facility (LEIF) at St. Louis Lambert (STL).

The LEIF-STL facility has been approved as a Port of Embarkation (POE) and Export Inspection Facility (EIF) since 2017, but recent focus by a number of entities including the State of Missouri has brought success. The National Center for Beef Excellence (NCBE) secured a Missouri Agriculture Small Business Development Authority grant to lend assistance to STL and the Midwest Cargo Hub Commission in standing-up and promoting the facility.

“This is exciting progress for the state and shows that Missouri’s strong agricultural industry continues to power our economy. Missouri has long worked to push agricultural technology forward. What we are seeing today is how Missouri innovations and infrastructure are allowing us to market the industry to the world in a new way. We will continue to advocate for Missouri industries as we work to grow our economy and showcase all our state has to offer,” said Governor Mike Parson.

The LEIF-STL is 18,000 square foot dedicated and customizable facility designed for shipping livestock and horses. It has an adjacent 12,000 square foot open bay which will be used for the partial plane load to Brazil. The shipment to Brazil is the first of many hoped for overseas exports. There are currently three more potential loads that are being organized for shipment out of St. Louis in the near future.

LEIF-STL is the only on-site 24/7 livestock palletizing facility in the United States and is uniquely situated to provide service to livestock exporters. Within six hours exists a six-state livestock-rich supply area; Missouri, Illinois, Indiana, Kansas, Oklahoma and Arkansas.

Missouri and the Midwest are poised to provide advanced genetics to countries around the world. Due to the African Swine Fever much of the world’s swine herd has been depleted, including up to 70% of China’s swine population. The Midwest can play a significant role in helping to avoid or mitigate a world-wide protein shortage. Missouri’s strong livestock presence and the availability of this facility can place it on the map for future exports.

Chad Sayre, Chairman of NCBE said, “We are crossing a threshold that has been a long-time in coming. This could open up active trade around the world and new markets for Missouri and Midwest livestock. Our producers, family farmers, agribusinesses and research institutions can all benefit from creating this portal to the world market. I congratulate STL, the Midwest Cargo Hub Commission and thank the Missouri Department of Agriculture.”

Rex Ricketts, Secretary/Treasurer of the NCBE said, “Chad and I are proud to be a part of securing the facility originally and we are even more proud to see it being used. If we can get a foot-hold in the world market, Missouri livestock and its producers can be a part of feeding the world. This is one small step toward realizing that dream, but it is the first in what could be a long and fruitful journey.”