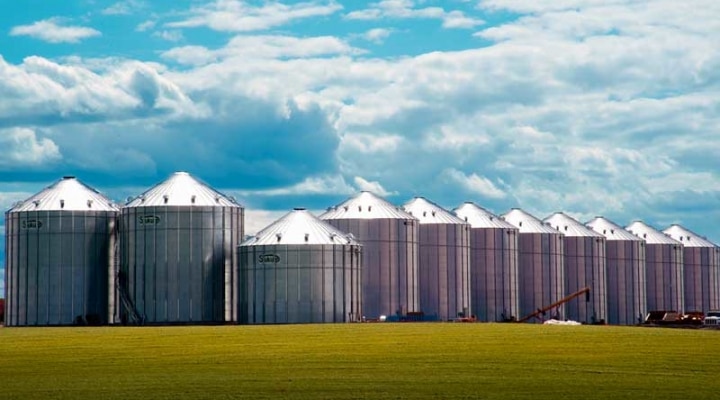 While grain bin entrapments are infrequent, engulfment can happen quickly, requiring emergency rescue. An entrapment occurs when a victim becomes covered in grain beyond the point of self-extrication, while an engulfment is when a person is completely submerged beneath the surface of the grain. (photo by Darla دارلا Hueske, creative commons/flickr.com)

HANOVER, Va. — Grain bins that store loose, dry bulk material like corn can enhance profitability on farms, but they pose a grave danger to farmworkers who access them.

While grain bin entrapments are infrequent, engulfment can happen quickly, requiring emergency rescue. An entrapment occurs when a victim becomes covered in grain beyond the point of self-extrication, while an engulfment is when a person is completely submerged beneath the surface of the grain. Approximately half of grain entrapments lead to engulfment, which is almost always fatal.

In 2019, 38 reported entrapments resulted in 23 deaths in the U.S.—almost twice as many as in 2017, according to Purdue University.

The Henrico Technical Rescue Team and neighboring rescue workers are prepared to respond to these types of emergencies after recent trainings at the Engel Family Farms in Hanover County. Rescue squad members were instructed on how to use an extrication apparatus provided by Virginia Farm Bureau Federation’s Farm Safety Advisory Committee.

This was a rare opportunity for Henrico County’s specialty unit, which is trained for unusual rescue situations like extrications or incidents involving confined spaces. At the farm training, the team entered a grain bin partially filled with dry corn. Once inside, they assembled the Great Wall of Rescue—lightweight panels that aligned to form a tube-shaped wall around an entrapped mannequin. Because it can take up to 900 pounds of force to rescue an engulfed 165-pound victim, a drill-powered auger removes grain from the tube prior to extrication.

The training was led by Lt. Charles Smith of Henrico County Division of Fire, Station 1, who grew up on a farm in Hanover and previously worked for the Engel family.

“The family has capacity to store 2 million bushels of grain at a time,” he explained to the first round of trainees on March 18. “There are 160 tractor-trailer loads of grain in one bin, which they can’t get to market in the same day, so they’ll store it.”

“The bins pay for themselves from a harvest standpoint,” Harper said. “A farmer can put corn in the bin, and give himself from September to August to market it, instead of having to market it right at harvest time.”

With hundreds of acres’ worth of grain to get off the ground and into storage, sometimes speed is prioritized over safety. And that’s when farmers can get in trouble, Smith explained.

“A neighboring county may not have (one) in their inventory of equipment, but they can at least become familiar with it,” Fisher said. “And we’re encouraging localities to obtain their own.”

The trainings, which were held on March 18 and 25, coincided with Stand Up 4 Grain Safety Week, March 29-April 2, an awareness initiative of the Grain Handling Safety Coalition. A free webinar on bin safety is scheduled for April 1.