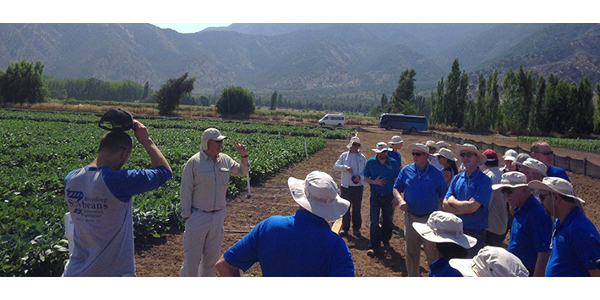 The University of Minnesota's Chilean research plot was the first (and remains the longest-running) college-led soybean winter nursery in the Southern Hemisphere. (Courtesy of Minnesota Soybean)

MANKATO, Minn. — This story first appeared in the May-June 2017 issue of Soybean Business.

“Since it’s warm pretty much year-round in northern Chile, they can have two growing seasons and a 12-month place to do research,” says Thorn, a Minnesota Soybean Research & Promotion Council (MSR&PC) District 9 director who toured the plot during a MSR&PC See For Yourself mission. “And as someone who hasn’t seen something like that before, it was very interesting to see how much seed production takes place down there.”

The University has maintained the plot, which is about 1.5 acres, since the late 1950s. According to Dr. Jim Orf, a professor emeritus in the UMN’s Department of Agronomy and Plant Genetics, the Chilean plot was the first (and remains the longest-running) college-led soybean winter nursery in the Southern Hemisphere.

“It was a good place to get things started because of the climate and political stability,” says Orf, who retired in 2016. “And we’ve been there ever since — the nursery has certainly made a major contribution over the years. It’s been an excellent education and resource tool for students and growers.”

The late Jean Lambert, a highly-regarded UMN professor and soybean breeder, borrowed the concept of a winter nursery from agronomist legend Norman Borlaug, who had two different nurseries in Mexico. Lambert attempted to grow soybeans in Mexico, but the operation failed because the days were too short and the climate wasn’t conducive. He also tried growing in Central America, but governmental strife stood in the way. Lambert then sought out Chile’s Minister of Agriculture.

“He decided to check out Chile,” Orf says, “because it’s a long country and he was trying to see if where he could grow soybeans would be at least somewhat like they would be doing in Minnesota.”

When the experiment station nursery was first established outside Chile’s capital city of Santiago, there was a local soybean industry, including a crusher facility in Santiago. Local growers even utilized a couple of the breeding lines from UMN as part of the varieties that were grown.

“After Brazil and Argentina came on strong with soybean production in the ’80s and ’90s, then it was a lot cheaper to import the beans from neighboring countries,” Orf says, “and Chile switched to growing mostly fruits and vegetables.”

Chile’s balmy, Mediterranean-like climate creates ideal growing conditions for row crops. Chile sees most of its moisture in the winter and depends on the snow pack from the Andes Mountains.

“It really is the perfect climate for soybeans,” says Kim Nill, Minnesota Soybean’s Director of Market Development. “The crops they grow down there look really nice. They’re very pretty.”

After sending seeds to Chile after the fall harvest, Orf says University agronomists visit Chile in January in advance of the March-April harvest to take notes and make initial crosses. The plots are irrigated; diseases and insects don’t pose a serious threat.

After the harvest, the seeds are shipped back to Minnesota. The result produces more than a tropical nursery.

“Basically, we can advance a generation of breeding over the winter time,” says University of Minnesota Assistant Professor Aaron Lorenz. “It saves us a whole season.”

The University of Chile’s agricultural facility is across the street from the plot, and has been an invaluable resource. The University of Minnesota hires Chilean students to help with cross breeding (by hand), planting and harvesting.

“They help us coordinate all the breeding and harvesting,” Lorenz says. “They basically take care of the plots for us. It’s a really nice partnership.”

The University has also been aided largely by funding from MSR&PC, which helps provide resources for expenses and seed shipments.

The relationship has proven both beneficial for researchers and Minnesota soybean growers.

“If it weren’t for the support of Minnesota Soybean, we wouldn’t have been able to pull this off,” says Orf, who visited Chile about once a year from 1981 until his retirement. “Since this allows us to get two generations per year, that means we can get newer, higher-yielding, disease-resistant varieties to farmers faster than if we didn’t have this winter nursery.”

The next mission
Minnesota soybean growers will have a chance to tour the hallowed Chilean plot in 2018. MSR&PC is sponsoring its latest See For Yourself Mission from Feb. 27-March 10 in Mexico and Chile. Interested applicants can apply online at mnsoybean.org/msrpc.

“This really gives soybean growers in Minnesota the chance to see how things are developed in variety-development for the things they’re going to see in the coming years,” Orf says. “It’s always a good learning experience to visit another country’s agricultural industry.”

“You can actually see what they’re doing there,” he says. “You hear about it, but until you actually see it and how big the research plots are, it’s pretty amazing to see what goes on.”

Paul Simonsen, former MSR&PC president, accompanied North Dakota growers on a Chilean tour in 2014. Simonsen traveled extensively during his tenure with MSR&PC. The Chilean experience, he recalls, remains one of his favorites.

“The environmental conditions were very favorable,” he says. “It’s a beautiful countryside, they have a lot of stuff going on and it was really interesting to see where our checkoff money goes. And you hardly change time zones, too.”