Home » First lady does some gardening 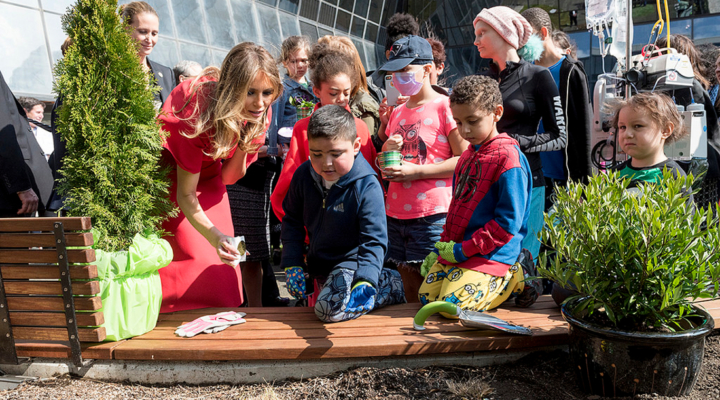 First Lady Melania Trump joins in with children to add seeds to a garden at the Children's National Medical Center in March, 2017. (The White House/Public Domain)

The former model and Manhattanite traded her stilettos for sneakers Friday to plant, harvest and wash vegetables in the White House kitchen garden with help from local children.

“I’m a big believer in healthy eating because it reflects on your mind and your body. I encourage you to eat a lot of vegetables and fruit so you grow up healthy,” she told about a dozen members of the Boys and Girls Club of Greater Washington. “It is very important.”

The red plaid shirt, jeans and sneaker-wearing first lady was venturing out into the South Lawn garden made famous by her predecessor, Michelle Obama, as part of her “Let’s Move!” campaign against childhood obesity. Mrs. Trump had said she intends to keep the garden going. Bursting with colorful vegetables and herbs, it’s tended by the National Park Service. About 17 percent of children ages 2 to 19 are obese, according to the Centers for Disease Control and Prevention.

But even as Mrs. Trump echoed her predecessor’s message, President Donald Trump’s administration has taken the opposite tack in some ways.

In his first major act in office, Agriculture Secretary Sonny Perdue partially rolled back federal rules the former first lady championed as part of her healthy eating initiative. Schools now will have more time to cut the amount of sodium in meals. The department will also continue to waive the requirement that all grains served must be 50 percent whole grain.

The Food and Drug Administration also has postponed introduction of a redesigned food label to help consumers quickly see how many calories and added sugars are in packaged foods and beverages. The agency also delayed a requirement for restaurants and grocery and convenience store chains to post calorie counts for prepared foods. Mrs. Obama had pushed for both changes.

But the picturesque White House garden, reinforced by the Obamas with a wooden structure and walkways, seemed to be thriving.

“Come here and help me,” Mrs. Trump urged some of the 10- and 11-year-olds, as she began pulling robust leeks out of the ground. The group also harvested eggplant, and Mrs. Trump clipped an artichoke from a nearby plant, while the White House chefs rinsed them nearby. The first lady also helped plant broccoli and later helped rinse the vegetables.

Mrs. Trump sent the children home with gardening kits, which included honey from the White House beehive and tools “so you can continue gardening at home,” she said.

Mrs. Obama said last year she hoped the garden would symbolize a healthier nation and that future first families would also cherish it.