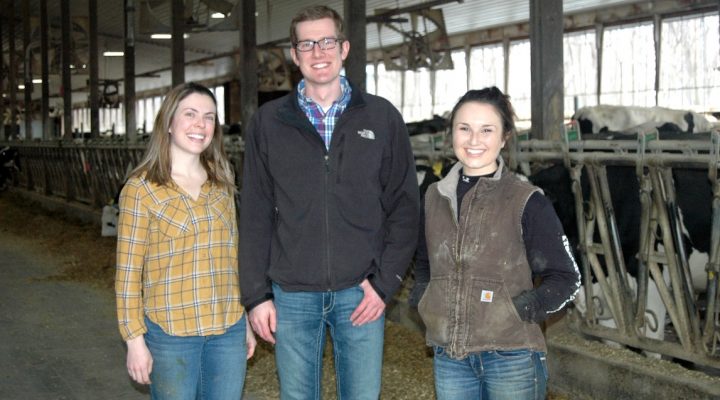 CHAZY, N.Y. — A scholarship fund established in 2016 after a $1.3 million donation to Miner Institute from the late Stephen Flanagan of Plattsburgh has awarded its first three recipients. Emma Duffy spent the past year as the dairy herdsperson intern at The William H. Miner Agricultural Research Institute and was the first recipient of the Stephen S. Flanagan, Frances B. Flanagan, and Stephen F. Flanagan Scholarship at Miner Institute. The scholarship was named after Mr. Flanagan and his parents. Wyatt Smith and Victoria Vendetta are the most recent recipients. Wyatt is in his second semester of a graduate program in dairy cow nutrition at the University of Vermont. Victoria will be taking over for Emma as the dairy herdsperson intern.

“With their plans to work in the dairy industry, Emma, Wyatt, and Victoria are exactly the sort of students and future industry leaders that Mr. Flanagan envisioned when he made this generous scholarship available to students at Miner Institute,” said Dr. Rick Grant, president of Miner Institute. Mr. Flanagan was a lifelong farmer who owned and operated Sunshine Dairy Farm until 1972 and thereafter continued to raise beef cattle on his Plattsburgh farm. Mr. Flanagan wanted to ensure that deserving young people would have an opportunity to study the science of food production and enjoy farming as much as he had. Mr. Flanagan passed away in November 2014 at the age of 86.