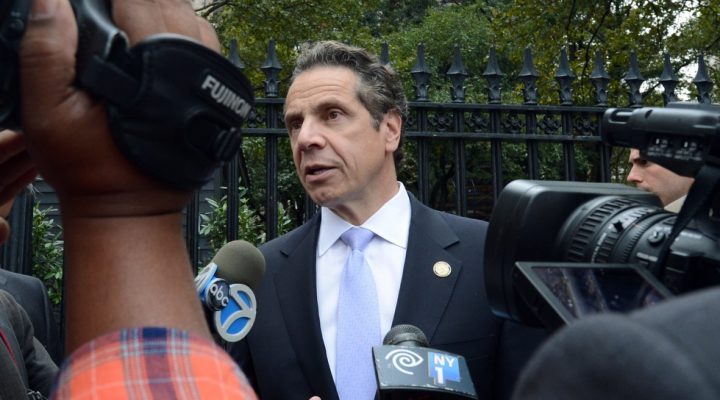 "Industrial hemp has tremendous potential to grow manufacturing, support the creation of new jobs and boost the profitability of farms across New York," Governor Cuomo said. "By eliminating barriers and expanding research and development for both businesses and farms, New York will capitalize on this emerging crop to continue to move this region and this state forward." (Metropolitan Transportation Authority of the State of New York, Flickr/Creative Commons)

“Industrial hemp has tremendous potential to grow manufacturing, support the creation of new jobs and boost the profitability of farms across New York,” Governor Cuomo said. “By eliminating barriers and expanding research and development for both businesses and farms, New York will capitalize on this emerging crop to continue to move this region and this state forward.”

Lieutenant Governor Kathy Hochul said, “This Summit is a great example of Governor Cuomo’s commitment to growing the State’s agricultural industry and creating opportunities to strengthen the economy. With so many promising applications for industrial hemp, the possibilities for unprecedented innovation in a variety of industries are truly limitless.”

The summit, which was held at Cornell University in Ithaca, brought together many agriculture, research and business leaders to discuss new developments and strategies to grow New York’s hemp industry. Based on the input of these key stakeholders, the Governor announced several innovative actions to increase opportunities for farms and businesses to enter the agricultural sector.

Issue First-Ever Hemp Research Permits
Previously, the state’s Industrial Hemp Agricultural Research Pilot Program was limited to institutions of higher education. At the Governor’s direction, the pilot was expanded to include private entities. Six private farms and businesses were issued permits, bringing the total number of hemp research sites across the state to 10:

Seek DEA Permit to Allow International Imports
Importing seed is central to hemp research in New York State. In addition to seeking a US Drug Enforcement Agency permit to import seed and establish a seed distribution site for international imports, the State Department of Agriculture and Markets will advocate to ease federal requirements to acquire hemp seed.

Expand Research at Cornell University
To support researchers at Cornell’s Agricultural Experiment Station in Geneva, $400,000 will be awarded to Cornell University to explore best practices for growing varieties of hemp in different soil types and in various locations around the state. The Experiment Station will also assess hemp seed quality for germination and weed contamination.

Increase Hemp Testing
The State Department of Agriculture and Markets will apply for a permit to increase ability to test industrial hemp for THC. This additional lab capacity will help ensure that New York hemp seed and other products are accepted in other states. Testing will also provide protection to the Department, growers and researchers that crops meet the acceptable THC level of 0.3 percent or below.

Engage Stakeholders in Program Development
The State Department of Agriculture and Markets will seek public input from farmers, researchers and industry leaders on revisions to the Pilot Program regulations and program requirements. In addition, the Department will propose changes to steamline oversight of the research done by educational institutions.

Advocate for Federal Policies to Boost Industrial Hemp Industry
As a result of discussions with industry experts and researchers, the Governor’s Washington D.C. office will work with other states to influence federal policy to restore hemp as an agricultural commodity.

The Industrial Hemp Summit follows on the heels of newly passed legislation that was originally proposed by the Governor in his 2017 State of the State Address, which eliminates the cap on the number of sites authorized to grow and research industrial hemp in New York State. The legislation builds on the 2016 New York State Industrial Hemp Agricultural Research Pilot Program, which permits up to 10 educational institutions, farms and businesses to grow and research the plant.

With agriculture identified as one of the top economic drivers for the Southern Tier through the Upstate Revitalization Initiative, the summit supports the next phase of the hemp program.

Senator Thomas O’Mara said, “Assemblywoman Lupardo and I have been working closely with Governor Cuomo and his administration over the past few years to put New York State at the forefront of a new industry with the potential to diversify our agricultural economy, generate revenue and create jobs. We appreciate the Governor’s decision to hold this important summit in the Southern Tier.”

Senate Agriculture Committee Chair Senator Patty Ritchie, “The continued success of New York agriculture depends on connecting our state’s hardworking farmers with new opportunities. I would like to thank Governor Cuomo and Commissioner Ball for hosting today’s summit, which will help farmers across the state diversify their operations, bolster their businesses and help New York’s leading industry continue to thrive.”

Assemblywoman Donna Lupardo said, “Today’s summit is the culmination of years of work designed to help position New York to take full advantage of this multi-purpose crop. It’s exciting to see so many people come together to explore ways to establish a vibrant hemp industry in New York, giving our state a significant competitive advantage, especially in the Northeast. Our goal is to make sure that all phases of the supply chain, from farmers to processors to manufacturers, are coordinated for the economic success.”

State Agriculture Commissioner Richard A. Ball said, “For centuries, hemp was a mainstay of American farms and with our natural resources and proximity to the largest marketplace in the world, New York is in a unique position to lead its revival in the U.S. I thank Governor Cuomo and the State Legislature for their leadership in bringing industrial hemp research to New York and working hard to expand the opportunities for our farmers, researchers and businesses.”

New York Farm Bureau President David Fisher said, “Plant research provides tools and opportunities for our farms to address a whole host of challenges facing agriculture. This includes expanding the state’s industrial hemp program to capitalize on potential economic development for agriculture in this state. The ability to diversify and make new crops available to farmers will be beneficial to our members, and New York Farm Bureau looks forward to continuing to partner with the Governor and his administration on this initiative.”

Kathryn J. Boor, the Ronald P. Lynch Dean of the College of Agriculture and Life Sciences, said, “Introducing a new crop presents agricultural challenges that must be addressed in order for growers to make optimal decisions on the farm. Cornell researchers in the School of Integrative Plant Science are poised to develop solutions that New York farmers need to make industrial hemp a meaningful addition to our vibrant bio-economy. Our research is backed by the technical expertise found in our Cornell Cooperative Extension network that brings scientific discovery directly to the fields, and we are pleased to partner with Governor Cuomo and Commissioner Ball to make industrial hemp a viable and prosperous part of New York agriculture.”

Hemp is an emerging commodity in states across the nation, generating nearly $600 million in sales in 2015. Both the stalk and the seed can be used to produce various goods, including clothing, building materials, fuel, paper, and other consumer products. Hemp that is classified as industrial has no more than 0.3 percent THC. New York has an opportunity to lead industry development by creating more opportunities for businesses to conduct research on the production and manufacture of the product.

The 2014 U.S. Farm Bill legalized the growth of hemp for research by departments of agriculture or higher education institutions in states where it has been approved by law. In New York State, Assemblywoman Donna Lupardo and Senator Tom O’Mara sponsored legislation that created New York’s pilot program. Governor Cuomo signed the law in December 2015. The Department released regulations on the pilot program in January 2016. It has since announced all 10 permits for the research of industrial hemp have been filled. Cornell University and SUNY Morrisville were issued research permits in 2016.  In March 2017, Governor Cuomo announced SUNY Sullivan and Binghamton University were authorized to grow and research hemp.