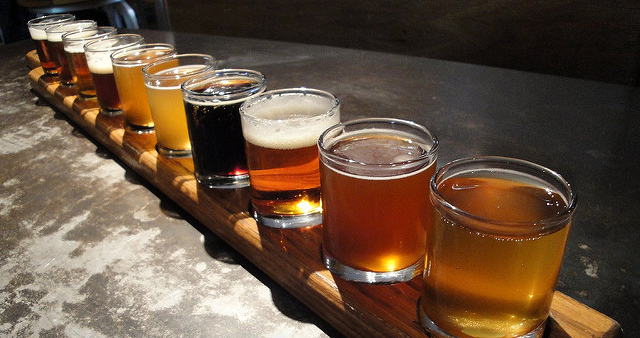 ALBANY — Governor Andrew M. Cuomo today announced the first-ever Taste NY Craft Beverage Week will be held November 5 through 11 in New York City. First announced in his 2017 State of the State address, the annual event will boost the exposure of the State’s world-class wine, beer, spirits, and ciders, helping to increase sales and drive economic growth. In anticipation of the inaugural event, a grand tasting was held today at the iconic Pier A Harbor House to connect producers from across the state to New York City restaurant, bar, and retail owners and purchasing agents, encouraging them to participate. The Governor also launched a new webpage where interested businesses can sign up to join Craft Beverage Week.

“The craft beverage industry in New York has experienced unprecedented growth in recent years and as a result, has become a critical driver of regional economies in every corner of this state,” Governor Cuomo said. “Craft Beverage Week gives local producers a chance to partner with restaurants across New York to showcase their top-notch products, and I encourage craft beverage enthusiasts from near and far to come out and experience the very best our wineries, cideries, breweries and distilleries have to offer.”

Businesses interested in participating had an opportunity to sample products from nearly 50 New York breweries, wineries, distilleries and cideries at a tasting and networking event this afternoon. The event allowed producers to meet face-to-face with bar, restaurant and retail owners and showcase their products. The goal was to promote participation in Craft Beverage Week, and provide these businesses an opportunity to build relationships that will last beyond the week-long promotion.

The following producers participated in the networking event:

State Agriculture Commissioner Richard A. Ball said, “New York’s craft beverage industry continues to get bigger and better, and Governor Cuomo is leading the way. Through exciting new ideas like this week-long promotion and innovative legislative reforms, it’s easier than ever for producers to do business and showcase their unique products. At the same time, New York farms are seeing increased demand for local ingredients and small communities across the State are seeing a rise in tourism. It’s good news across the board.”

Empire State Development President, CEO & Commissioner Howard Zemsky said, “New York’s craft beverage industry has been booming because of Governor Cuomo’s leadership, and it’s resulting in new jobs while strengthening regional economies. We’re building on that momentum with the Taste NY Craft Beverage Week, which will showcase products from across the state and generate even more interest in the world-class beers, wines, ciders and spirits made in New York.”

State Liquor Authority Chairman Vincent Bradley said, “Governor Cuomo’s support of New York’s craft beverage industry, by cutting red tape, modernizing the laws and launching innovative marketing campaigns has led to unprecedented growth throughout the state. Craft Beverage Week is another demonstration of the Governor’s clear commitment to our craft producers and a great opportunity for consumers to personally experience the unique stories, creativity and craftsmanship that go into every bottle and glass.”

Since taking office, Governor Cuomo has led the effort to modernize New York’s craft beverage industry and pave the way for unprecedented growth through new legislation, regulatory reforms, groundbreaking initiatives and promotional campaigns. Today, there are nearly 1,000 licensed wineries, breweries, distilleries and cideries across the State, a threefold increase over 2011.

NYS Brewers Association Executive Director Paul Leone said, “The growth of the brewing industry in New York State has been steadily climbing due to favorable legislation and incredible demand. Thanks to Governor Cuomo’s efforts in promoting all craft beverages, New York is quickly becoming one of the top craft beer producing states in the entire country. Promotion through events like the first-ever Taste New York Craft Beverage Week, is just one more way to get our products in the hands of a public that is demanding more and more locally made beer, cider, wine and spirits.”

New York Wine and Grape Foundation Executive Director Samuel Filler said, “New York City is the most important and competitive wine market in the world. The New York wine industry values the opportunities created by Governor Cuomo, like Craft Beverage Week, to access the New York City market and present our world-class wines to the trade and media. Craft Beverage Week is an important step in forming relationships for our industry to expand its market share in New York City.”

New York Cider Association Executive Director Jenn Smith said, “New York Craft Beverage Week promises to increase awareness of and appreciation for the diverse and delicious beers, ciders, spirits and wine being produced in our state, developing the craft beverage market for these products close to where they are made. We are kicking off our seventh annual Cider Week NYC in mid-October, and have found this kind of coordinated promotion to be a reliably high impact way to reach consumers with our products, so we are thrilled to be a part of a larger, more comprehensive craft beverage festival.”

Pier A Harbor House Director of Operations Anthony Malone said, “With our backdrop of the Statue of Liberty and the Hudson River, we were honored to host the preview of Taste NY Craft Beverage Week at Pier A Harbor House. We commend Governor Cuomo’s tireless efforts to promote the Empire State’s diverse and unrivaled range of artisanal food and beverage offerings. Looking ahead, we are very excited to open the first-ever Taste NY store devoted exclusively to New York State wine and spirits right here at Pier A.”

New York Distillers Guild President Cory Muscato said, “The craft distilling industry across New York State has seen huge growth in demand and presence over the last few years due in part to Governor Cuomo’s leadership and support. Thanks to Governor Cuomo and an extremely attentive legislator, New York State is considered by many to be the poster child for craft beverage sector reform and growth programs. It’s very gratifying to see that same level of effort and support going towards helping our distillers get their products into the hands of all New Yorkers. Taste NY Craft Beverage Week is just another great example that will aid all of New York’s craft beverage producers in championing our products nationwide!”