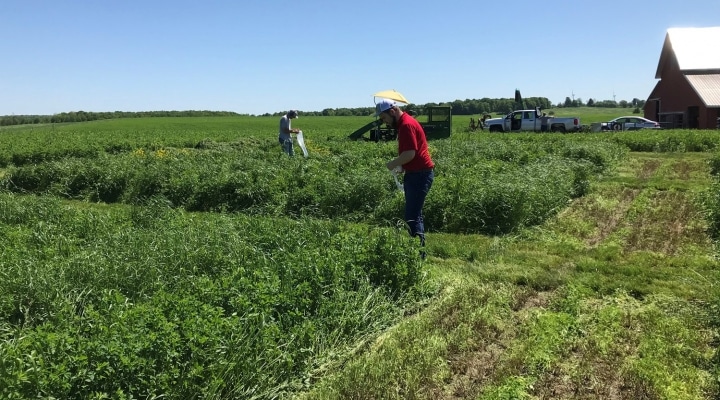 The Northern New York Agricultural Development Program (NNYADP) is funding the research that is being conducted by the Cornell University research team of Debbie J.R. Cherney, Ph.D., and Jerry H. Cherney, Ph.D. The latest results report of trials on farms in NNY is posted under the Research: Field Crops: Grasses tab at www.nnyagdev.org.

The NNYADP trials are evaluating the opportunity to add European varieties of meadow fescue, a winter-tolerant perennial grass, to alfalfa plantings. The goal is to successfully grow meadow fescue as 20-30 percent of a mix with alfalfa under northern New York conditions. The spring harvest may account for up to half of the total forage yield of a crop grown to feed milking dairy cows.

“Many of the European meadow fescue varieties we are evaluating were developed in harsher environments than those in northern New York, so they should overwinter successfully here, but we need to evaluate the opportunity for yield and quality and their competitiveness with alfalfa,” Jerry Cherney explained.

The U.S.-bred meadow fescue in the NNYADP trial showed the highest neutral detergent fiber digestibility of the 19 varieties trialed in 2019. The seed supply of the variety known as Hidden Valley for the farm from which the variety has originated sold out almost immediately after it became available. The NNYADP trial data indicated that the Hidden Valley meadow fescue grew at the desired grass percentage in tandem with alfalfa.

Harvested samples are assayed for alfalfa-grass percentage and alfalfa and grass quality in terms of crude protein, lignin, and fiber; dry matter yield; and evaluated for the influence of soil type, drainage, fertilization, seeding rate, and harvesting schedule on crop quality.

That perfect tree is still available - if you know where to look
December 8, 2021