Home / Illinois / First dicamba-resistant waterhemp in Illinois
A new user experience is coming! We'll be asking you to login to your Morning Ag Clips account March 1st to access these new features.
We can't wait to share them with you! Read more here. 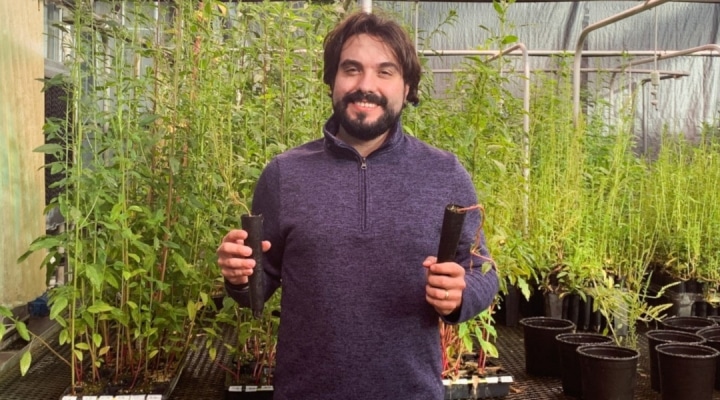 Lucas Kopecky Bobadilla (pictured) and others in the Department of Crop Sciences documented the first case of dicamba-resistant waterhemp in Illinois. (Courtesy Photo)

URBANA, Ill. — University of Illinois weed scientists have confirmed resistance to the herbicide dicamba in a Champaign County waterhemp population. In the study, dicamba controlled 65% of the waterhemp in the field when applied at the labeled rate. And in the greenhouse, plants showed a 5-to-10-fold reduction in dicamba efficacy compared with sensitive plants.

It’s not a huge level of resistance, but there’s a twist. The population had never been sprayed with dicamba or its relative 2,4-D, to which it is also resistant. So, why did waterhemp stop responding to these herbicides?

“When we use herbicides, we select for plants that can survive those herbicides through a variety of mechanisms. Historically, that was target-site mutation, but now, more and more, we’re seeing metabolic resistance, where the weeds are activating detoxification genes before the chemicals can do harm. And so these weed populations are accumulating suites of genes that are active against various herbicides, and there’s cross-reactivity,” says Pat Tranel, professor in the Department of Crop Sciences at Illinois and co-author on the study.

Tranel and his colleagues already knew waterhemp in the Champaign County population was resistant to the synthetic auxin herbicide 2,4-D. Since dicamba is also a synthetic auxin, it’s not that much of a stretch to imagine the detoxification pathway might be the same. But waterhemp in the study population resists herbicides in five other site of action groups, so cross-reactivity could have come from anywhere.

“As we get these more complex populations that have experienced selection from multiple chemistries, they are becoming resistant to broader and broader suites of herbicides, whether they’ve seen those herbicides in the past or not. That’s a scary thought,” Tranel says. It could mean new chemistries could be rendered ineffective before they even reach the shelves.

Origin of resistance aside, 65% control, particularly by a synthetic auxin, is not good enough.

“At 65-75% control, a farmer might not realize they’re dealing with resistance and instead might just think they screwed up during application. Because they would see some activity. And these growth regulator herbicides can actually stimulate growth, causing the plant to twist up and thicken and never really die. They just kind of sit there,” Tranel says. “That makes it harder to quantify resistance.”

The researchers went to great lengths to document dicamba damage. In the field, they sprayed dicamba alone and in combination with other herbicides to quantify damage. And in the greenhouse, they conducted a dose-response experiment and determined heritability of the resistance trait across generations.

“Because auxin damage can be hard to gauge visually, I used an image analysis, taking more than 4,000 images from multiple angles. With that, I could train a model to say if the plants were resistant or not. It’s really difficult, because even when we see damage, at the end many of the plants still flower. And if they flower, they produce seeds, and they will be a problem next year,” says Lucas Kopecky Bobadilla, doctoral student and lead author on the study.

The researchers found dicamba resistance was moderately heritable, meaning it could be passed on to offspring at least some of the time. Tranel says those genes are incompletely dominant, which explains why the team saw a range of responses from sensitive-like to up to 10-fold resistant.

“It’s safe to say dicamba isn’t going to become more effective,” says co-author Aaron Hager, associate professor and Extension specialist in crop sciences. “And once we find a resistant population, that doesn’t mean there aren’t others. All it means is we found one. We have no idea how common this is.”

Dicamba has been used in Illinois for at least 50 years. But with more acreage being planted in dicamba tolerant soybeans, use of the chemical is on the rise. And with increasing selective pressure, Hager says, dicamba resistance could spread quickly.

“We saw this decline to 65% control in a population that wasn’t being managed with dicamba. If there was extensive selection through repeated dicamba application, I’m confident we would see an increase in the level of resistance in this population,” Tranel says.

Hager and Tranel, along with the rest of the weed science team at Illinois, have been making the same recommendations for years.

“Look, we’re going to continue to use herbicides on the vast majority of acres in this state. We’re not going to stop,” Hager says. “But it behooves people to really have some deep conversations with whoever’s giving you recommendations, whether it’s your input supplier, your agronomist, or whoever. It’s time to go back to what we used to do and try to map out three or four year weed control programs and not just do this on a yearly basis.”

And, he adds, “We’re going to have to do something in addition to herbicides to try to get to the end of the growing season without any seed production. Anything short of that and evolution continues.”

The article, “Characterization and inheritance of dicamba resistance in a multiple-resistant waterhemp (Amaranthus tuberculatus) population from Illinois,” is published in Weed Science [DOI: 10.1017/wsc.2021.76]. Authors include Lucas Bobadilla, Darci Giacominni, Aaron Hager, and Pat Tranel. The work was funded by Bayer Crop Science.

The Department of Crop Sciences is in the College of Agricultural, Consumer and Environmental Sciences at the University of Illinois at Urbana-Champaign.