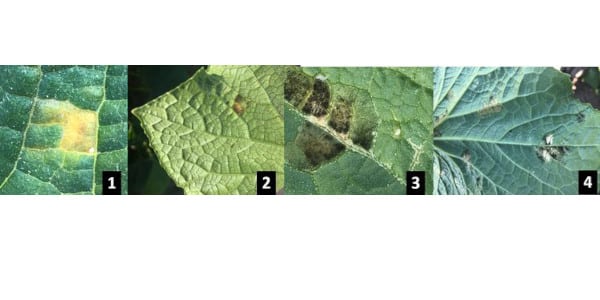 1-2: Early symptoms of downy mildew on cucumber with the yellow-brown tissue bordered by the leaf veins. 3-4: The dark spores of the cucumber downy mildew pathogen can be seen on the underside of the leaf. These spores move via air currents and infect unprotected plants. (Photos by Mary Hausbeck, MSU)

EAST LANSING, Mich. — Cucurbit downy mildew spores have been verified in air samples using a Burkard volumetric spore trap in Allegan County, Michigan. A cucurbit downy mildew disease outbreak on cucumber plants has not been reported in Michigan at this time. While it is concerning that an influx of sporangia has been detected, these sporangia must land on a suitable plant such as a cucumber or melon and then the weather conditions must allow the spore to germinate and infect. It is recommended that growers and scouts keep a close eye on cucumber and melon plantings that may have been established under low or high tunnels. The positive air sample from Allegan county is the first confirmation of airborne downy mildew sporangia for the state this year.

The spore trapping network to detect downy mildew spores in the air was established in Allegan and Bay counties approximately 10 days ago. Spore traps are being placed in additional growing regions this week. In Allegan County, we detected Clade 2 of the cucurbit downy mildew pathogen spores in the air. The cucurbit downy mildew Clade 2 pathogen can infect cucumber and melon. Allegan County is located on the west side of the state in the southern region and hosts vegetable production for the fresh and processing markets. Downy mildew spores have not been detected in air samples from the Bay County monitoring site.

It is early in Michigan’s growing season for the occurrence of cucurbit downy mildew spores in air samples from the field especially since large parcels of cucumbers are just being planted. The use of recently developed molecular diagnostics coupled with microscopy ensures the accurate confirmation of this pathogen from our spore trap air samples. The cucurbit downy mildew sporangia detected in the air from Allegan county may have originated from local/regional cucumber production greenhouses or from early field plantings of cucumbers and melons being grown in low/high tunnels. Elsewhere in the U.S., cucurbit downy mildew outbreaks have been detected on cucumber in Florida, Georgia and South Carolina.

We urge growers, scouts, consultants and MSU Extension educators to monitor greenhouse cucumber production and early cucumber and melon field plantings that may be in high or low tunnels. Suspect samples should be submitted for a diagnosis. See instructions on how to submit samples.

In previous years, it has been common to record the first field outbreak around the first week of July. The detection of downy mildew spores in the air usually occurs a few days or a couple of weeks prior to a field outbreak.

It is very important cucumber growers use a proven downy mildew program with fungicides shown to have good activity in our yearly Michigan research plots, including:

Many of the pickling cucumber crops are currently being planted or have recently emerged. Downy mildew infection at this stage would likely hurt yields significantly. Downy mildew can infect the cotyledons of cucumbers and has been observed in previous years for the later season plantings.