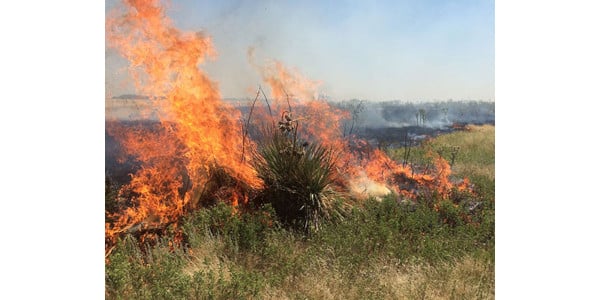 Prescribed fires during the growing season -- generally July through September in Kansas -- can provide benefits for land managers and public safety. (Courtesy of K-State Research and Extension)

MANHATTAN, Kan. — While most prescribed fires in Kansas are conducted during the dormant season — typically March through April — researchers and fire managers suggest growing season burns done between July and September can provide benefits for land managers and public safety.

Dennis Carlson, an assistant state fire management officer with the Kansas Forest Service, said prescribed fires during the dormant season burn more aggressively due to the buildup of dry grasses, woody debris and other litter. The combination of increased fuel load, high winds and low humidity levels can result in increased instances of wildfires, among other challenges.

“One thing we see with prescribed fires in the dormant season is how few days there are to apply prescribed fire due to high winds and low humidity,” Carlson said. “With so few days to burn, it often results in increased smoke management issues due to the significant number of prescribed fires squeezed into these few days.”

Higher levels of humidity and increased vegetation moisture in the growing season help to moderate fire behavior and reduce the risk of an escaped fire, according to Carlson.

Growing season prescribed fires can also be used to manage rangeland woody encroachment, manage certain weed species, and provide wildlife habitat benefits. The benefits and risks along with fuels, wind speeds, humidity and landowner goals are considered when building the prescription for the plan so one can stay within the guidelines to meet the intended resource benefits.

Olson said the diversity of plant species was improved by four consecutive years of prescribed fire in August or September compared to April prescribed fire. In a subsequent three-year study, the performance of grazing yearling cattle was found to be similar between pastures burned in April versus those burned in August.

“Our team of researchers concluded with these projects that comprehensive and cost-effective control of sericea lespedeza could be achieved by moving the prescribed-fire season from spring to late summer without sacrificing animal performance while simultaneously improving all meaningful indices of rangeland health,” Olson said.

“During the growing season and when within prescription, fires travel slower and have less overall intensity due to the fire needing to use significant energy to drive off the moisture from the previous year’s fuels along with consuming the current green fuels,” Carlson said. “These growing season burns will produce more smoke and steam compared to dormant season burns so one must take this into account by only burning on days when the winds will push smoke away from areas of concern.”

Carlson said there are several things to consider when planning a summer prescribed burn:

More information on conducting a prescribed burn and the benefits are available from the Kansas Forest Service and K-State Research and Extension.