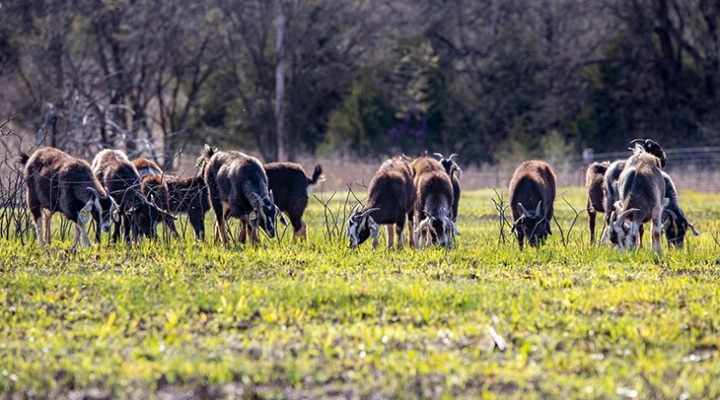 STILLWATER, Okla. — Researchers from Oklahoma State University are partnering with university scientists and researchers in two other states on a project using fire and mixed animal species to graze in an effort to enhance livestock production and more sustainable rangelands.

Enhancing Livestock Production from Rangelands in the Great Plains is a research project funded through a five-year, $10 million grant from the U.S. Department of Agriculture National Institute of Food and Agriculture. Partnering with OSU are researchers and scientists from Texas A&M AgriLife Research, Texas A&M Agrilife Extension and the University of Nebraska.

“We’re dealing mostly with cattle and goats in this project. Cattle have always been important in the Great Plains,” said Fuhlendorf, who serves as the lead OSU principal investigator on the research portion of the study. “We’re using goats because they eat different plants than cattle, and many of the types of plants they eat are species ranchers spend a lot of money trying to control.”

He said the project team will be working with a team of ranchers from Texas, through Oklahoma to Nebraska who are doing various aspects of the project’s objectives.

For many years, fire has played an important role in rangeland landscapes that are managed for livestock production. Fuhlendorf said it controls woody plants that are invading rangelands throughout the Great Plains.

“We view invasive plants as the greatest threat to rangeland agriculture and conservation in the region,” Fuhlendorf said. “Fire increases forage quality and quantity, manages the distribution of livestock and improves wildlife habitat. Prior to European settlement, Native Americans burned these landscapes nearly every year. The grasslands that were here when settlement occurred were dependent on these fires. However, those fires were stopped upon settlement, and in some cases, became illegal. This socio-ecological transformation is finally catching up with us.”

Laura Goodman, assistant professor and OSU Extension range specialist, said prescribed fire is very effective in controlling all woody plants when they are young. However, when plants get larger, it can be more difficult to control some resprouting species.

“Woody brush encroachment is a big problem for ranchers. Species such as honey locust and sumac can resprout, but fire can make those more accessible to goats to browse,” said Goodman, who is the lead principal investigator for the Extension part of the Prairie Project. “Research shows prescribed fire and grazing have been used to decrease the spread of wildfire by decreasing fuels, but by combining fire and grazing, you can increase how long fuels are suppressed.”

Goats are known for seeming to eat almost anything, which makes them a great addition to production land with woody species such as blackberry, sumac, elm, oak and Eastern redcedar. Goodman also said goats are great consumers of problematic invasive plants such as sericea lespedeza and musk thistle.

“In this project, ranchers, researchers and Extension folks will travel to each collaborator’s ranch to experience each rancher’s unique management strategies and struggles after trying patch-burn grazing,” she said. “Ranchers manage with very different styles due to grazing in different types of ecosystems, but a lot of what people do is cultural, and we hope to expose these ranchers to different management cultures that will work for their region,” she said.

In Oklahoma, research is being done at the Stillwater Range Research Station and The Tallgrass Prairie Preserve in Osage County. The project involves six pastures in the Stillwater area, each with about 120 acres and divided into six different burn patches. Goodman said there are no fences to prevent animals from moving from patch to patch and three of the pastures have cattle only, while the other three have a combination of cattle and goats.

“We’re putting GPS collars on animals to see how they use the different patches and how they use different vegetation within each pasture,” she said. “We’re also collecting remote-sensed data with an airplane to help monitor changes in the pasture plant, in addition to collecting on-the-ground data.”

At the Tallgrass Prairie Preserve, there are eight, 1,000-acre pastures with patch-burn grazing with cattle. Four of the pastures have dormant-season burning and four have growing-season burning.

In addition to the producers collaborating with the research project, Goodman said they also are doing teacher workshops to develop unique curriculum for schools that also are involved.

“We’re working with 4-H and FFA groups to monitor the changes in plants and animals at our collaborator ranches,” she said. “Ranchers, students and teachers all will be part of our social media outreach and Extension field days.”

Fuhlendorf has high hopes for this research project and how it will positively impact agricultural producers in the Great Plains region of the country.