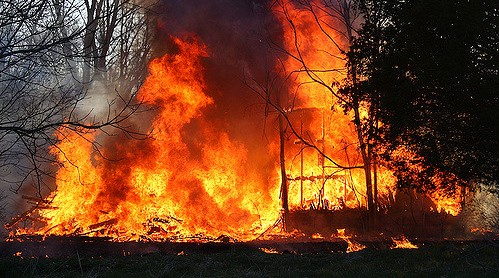 The barn and farmhouse were 152 years old, so the wood was extremely dry, said Fire Chief Gary Dillon. There also was a lot of hay, wood chips and sawdust. (Stock image via Chuck Grimmett, Flickr/Creative Commons)

The fire started in the Wallace farm’s milking parlor, but investigators were not certain of its exact source, said Waterbury Fire Chief Gary Dillon.

Rosina Wallace, 71, ran the farm that her great-grandparents bought in 1866. Her brother, K. Alan Wallace, helped her run it. They both stood by Monday as an excavator tore down the farmhouse where they both grew up and where he currently lived.

Rosina Wallace’s home on the property also was destroyed. Family and community members stopped by with food and to offer condolences and help throughout the morning.

“It’s holding me up,” Rosina Wallace said of the support.

“There’s an awful lot of people who have to go through this, so I know I’m not the only one and it can’t be any worse for me than it is for other people that have had to go through it,” she said.

The barn and farmhouse were 152 years old, so the wood was extremely dry, said Fire Chief Gary Dillon. There also was a lot of hay, wood chips and sawdust.

High winds fed the fire, and a lack of water initially made it difficult to fight, he said.

No injuries were reported.

Rosina Wallace hosted numerous school groups at the farm over the years.

“This is just a different world,” she said on the Cabot Creamery website. “Even for kids who grow up right next door, if they don’t come visit the farm, they don’t make the connections.”

“The cows were her kids,” he said. “And so she lost them and it’s going to be a real heartbreaker.”