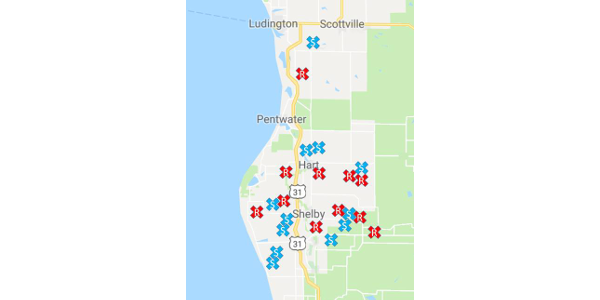 Figure 1: map of the collection locations of streptomycin resistant (red x with an “R”) and susceptible (blue x with an “S). Some locational marks represent more than one field due to close proximity of fields to one another. (Photo by Dave Jones, MSU Extension)

EAST LANSING, Mich. — Streptomycin resistance in fire blight (Erwinia amylovora) has been documented in the Oceana-Mason county area for over 10 years, but resistance has never been universal to all orchards in previous regional screens. The “spotty” nature of the previously documented resistance has provided on-farm management headaches for area growers ever since given the uncertain status of most local orchards. While growers with streptomycin resistance do have access to another highly effective antibiotic in Kasumin, this product is much more expensive to apply than streptomycin. This leads many growers to take the risk with streptomycin each year in the hopes of saving money and achieving successful management.

3-5 strikes with visible bacterial ooze were collected from all locations. The bacterial ooze was cultured onto LB agar (a bacterial growth medium) and tested to confirm that each plate was Erwinia amylovora. After identification, each plate was streaked onto LB agar plates treated with 100 micrograms of streptomycin sulfate per milliliter. Any colonies that appeared on the streptomycin impregnated plates were tested to confirm fire blight, and results were recorded based on geographical location of the sample.

Results confirmed that streptomycin resistance is a growing problem in the region, but that it is not universal to all orchards. Slightly more than half of the locations that were tested were positive (Figure 1).

Streptomycin resistance in 2018 seems to be seeded throughout Oceana and Mason County. Southwest Oceana County seemed to be the only area in the two counties that all bacterial isolates were typically still susceptible to streptomycin. In all other areas there seemed to be a mix of resistant and sensitive isolates.

Each grower who participated in this study has already been (or will soon be) contacted with the results individually, and will have to make the adjustments for next year. Growers who did not have fire blight samples submitted over the course of the study are encouraged to look at locations in immediate proximity to their own acreage. Farms that are close to sites that have confirmed streptomycin resistance are most safe assuming that they have resistance in the future, and should switch to using Kasumin as the backbone of their antiobiotic program during bloom.

Growers who have been tested and still have efficacy can continue to use as a valuable tool. However, all growers should submit any fire blight that appears each year for additional testing. Streptomycin resistance will likely continue to build in the coming years, and may ultimately become useless to us. Careful attention to the issue is important, especially for growers who are in the high density fresh market apple game – play it safe with these plantings. If you have even slight suspicions on streptomycin, Kasumin is wiser. These plantings are worth too much to take any chances with.

In addition to a high caliber antibiotic program, growers are reminded that the usage of Apogee or Kudos is also strongly recommended, especially in light of the rise in streptomycin resistance. This is particularly important for high density apple farmers. An increase in both the number of growers who routinely apply these products as well as the number of applications of product each year is thought to be a significant factor in the lower incidence of fire blight in the Grand Rapids area this year compared to the Oceana-Mason County region. These products are among the few reliable tools that growers can use to reduce the risk of shoot blight infections in young trees, and should be viewed as a mandatory part of any high quality fire blight management program in Michigan.

MSU Extension would like to extend a special thanks to the crop scouts of Wilbur-Ellis Co., Nutrien, and Helena Chemical Co. who helped with the collection of fire blight samples throughout this study.