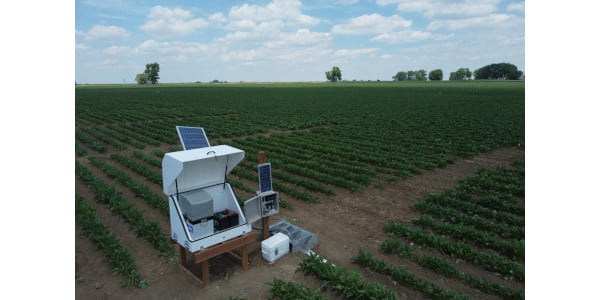 FORT COLLINS, Colo. — We Americans like our sugar, but most of us don’t know where it comes from. High-fructose corn syrup is the dominant sweetener in many non-diet soft drinks, but the source of table sugar and sugar used in baking is more of a mystery.

The granular sugar we consume is derived from sugar beets and cane sugar. The size of the sugar industry in the United States is impressive, and Colorado State University’s ground-breaking research in support of the nation’s sugar beet farmers is transforming the industry.

“Colorado State University is helping us protect the future of farming,” said Rebecca Larson, vice president of governmental affairs and chief scientist for the Western Sugar Cooperative. “Research scientists are helping us share data that protects access to technology, and they are also finding better ways to farm by eliminating our reliance on certain pesticides, exploring new irrigation technologies, and coming up with new [seed] breeding methods.”

Many people think of red or table beets when they hear the word “beet.” Although they are the same species, sugar beets are considerably different in appearance.

According to the American Sugarbeet Growers Association, a fully grown sugar beet root is about a foot long, white in color, weighs between two and five pounds, and is about 18% sucrose. They are grown in mild climates where the growing season is about five months long. Sugar beet farms are located across 11 states in the west and the upper Midwest of the United States.

After harvesting in the fall, sugar beets are processed at one of 21 factories that operate continuously from October through April. The U.S. produces about 75% of the sugar it consumes. Beet sugar represents 57% of domestically produced sugar with the remainder coming from sugar cane. The two sugars are the same at a molecular level, so packaging labels typically don’t specify the source as beet or cane sugar.

The Western Sugar Cooperative is wholly owned by roughly 800 beet growers and shareholders living in Colorado, Wyoming, Nebraska, and Montana, and collectively produces more than three million tons of sugar beets per year. It is vertically integrated, which means the farmers own everything from the planting of the seed to the selling of the sugar.

“Consumers today are very interested in knowing where their food is coming from, how it’s produced, and what the environmental impacts are,” said Larson, who oversees programs that collect grower and sustainability data and provide it to consumer packaged goods manufacturers and retailers.

One area posing unique challenges is climate change. According to Larson, “we’re going to need crop and technology changes so much faster because climate change is imparting all kinds of funky things we’ve never seen before. Addressing that reality hasn’t been part of traditional seed breeding and we’re going to need to be able to adapt more quickly.”

As part of that strategy, WSC invests $200,000 – more than 50% of its research budget – at CSU each year. “Colorado State is doing a really good job of developing meaningful projects and the researchers are doing industry-leading research on a global scale that is contributing to a crop that’s economically important to the state,” said Larson.

His program is conducting extensive research on several agricultural water quality issues, one of which is soil moisture monitoring. The equipment can be expensive. However, Wardle and his research team, in collaboration with Jay Ham’s Agricultural Sciences Micrometeorology Lab in the Department of Soil and Crop Sciences, are revolutionizing data collection by 3D printing some of the components and using a free data service connected to a mobile app.

Finding ways to equip farmers with affordable technologies helps them operate more efficiently based on real-time data collected from their own farms. “Producers [farmers] are some of the most adaptable, creative people I know,” Wardle said. “What really excites me is getting the equipment we develop into their hands.”

Weeds and pests adapt to new herbicides and pesticides faster than we can develop them. That’s why genetic modification of crops is here to stay. The larger questions are who gets to use it, how much does it cost, and how heavily is it regulated?

Plant breeding methodologies can be confusing and difficult to understand. One widely used traditional breeding approach is called mutagenesis. It is the process of exposing seeds to radiation or certain chemicals to create random mutations, from which breeders then select the most desirable mutations for future cross-breeding or commercial release. Ruby red grapefruits were created this way and can also be sold as organic.

Similarly, gene editing (also referred to as targeted mutagenesis), is a process that uses enzymes to make smaller, more precise changes or mutations to a specific DNA sequence of a living organism.

By contrast, genetic engineering provides a faster and even more precise way to achieve desirable traits. The process – which creates what are commonly referred to as genetically modified organisms or GMOs – introduces beneficial native or foreign genes directly into the DNA of a living organism using several different methods. Mutagenesis, gene editing, and genetic engineering all result in novel trait introduction but only the latter is regulated by the Federal Government.

One of the main reasons commercial GMO crops are more expensive and time consuming to bring to the market is because they are uniquely regulated. To expand competition in the marketplace and speed up the release of environmentally beneficial traits, farmer cooperatives and their trade organizations want to see gene editing viewed by Federal regulators the same as mutagenesis. A decision on that is still pending.

For WSC sugar beet growers, genetic engineering has resulted in tremendous improvements. New varieties have increased sugar yield from an average of 8,000 pounds of sugar per acre to more than 11,000 pounds; need a third less water; save half the fuel by requiring fewer trips into the field to apply pesticides, herbicides, or to plow; and reduce the overall environmental impact by 92%.

“There are so many beneficial things that have come from gene engineering technology, but the possibilities for future advances are almost beyond comprehension,” Larson said. Gene editing is expected to improve sugar beet pest and disease tolerance without the need for chemicals as well as introduce other desirable traits for quality, yield, and storage.

As with all genetically modified seeds, the WSC is helping their growers ensure their effectiveness before farmers adopt them. The WSC is currently funding a weed survey being conducted by Todd Gaines (B.S., ’04; M.S., ’06; Ph.D., ’09), a CSU molecular weed scientist, to determine if the genetic makeup of the weeds in sugar beet fields makes them sufficiently susceptible to the herbicides the new seeds are engineered to resist.

There are also significant opportunities in gene editing for controlling diseases without relying on pesticides. CSU scientists Punya Nachappa, an entomologist, and Vamsi Nalam, a molecular biologist, are researching innovative ways of using genetic editing to help plants fend off insects, rather than applying insecticides.

Let science do the talking

In 2018, a competitor to the sugar beet industry began (falsely) asserting that residue from glyphosate, the active ingredient in the popular herbicide, Roundup, was making its way through sugar beet factory processing into consumer sugar. Refuting that allegation would have been impossible without the research of Franck Dayan, a CSU weed scientist.

His research demonstrated that the leaves of sugar beet plants rapidly absorb glyphosate after it is applied, but then move it through the roots where it is exuded into the soil within two weeks. Only trace amounts of glyphosate remained, and the processing of the beets eliminated the herbicide from the crystalline sugar final product.

“Given the sensitivity of the issues around the use of chemicals,” said Luther Markwart, executive vice president of the American Sugarbeet Growers Association, “the research done [by Dayan] at CSU confirmed the purity and safety of the sugar we’re providing, which was vital to maintaining consumer confidence in the sugar beet industry.”

One monumental crisis was adverted but it raised concerns about whether glyphosate was causing some kind of permanent and negative damage to the soil microbiome, which is alive with bacteria and fungi.

With support from the WSC, Pankaj Trivedi, a microbiome and plant system researcher in CSU’s Department of Plant Sciences, studied the issue. His findings showed that glyphosate was having no negative impact on the soil biome, and in fact, was contributing to the overall health of the soil and reduced the need for tilling.

“Research data arms our farmers with really powerful messaging,” says Larson. “When people express concerns about soil health, we can say, ‘Yeah, we’ve looked at that because we have concerns, too. Farming is our livelihood, and we want to make sure it isn’t doing any harm.’”

“The more we work with researchers the better they understand our industry and the better we understand their capabilities. We may start with one very narrow project, but then it expands into other things over time,” Larson said. “The research scientists at CSU have really been delivering stellar results for us, so we’re very, very happy.”

Potato sales at retail from April to June 2021