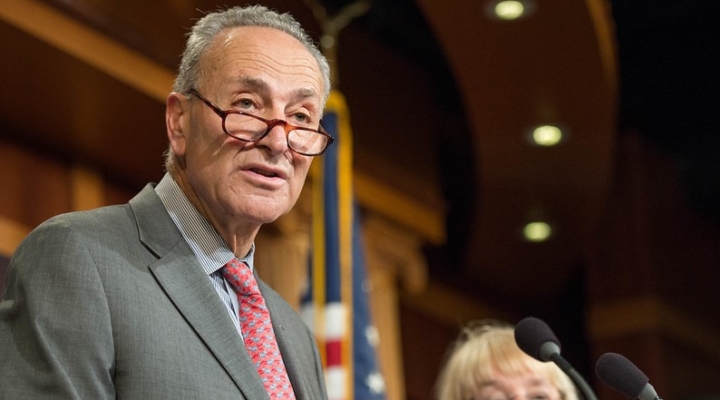 Sen. Schumer explained that without access to traditional financial services, local farmers and the industrial hemp industry across Upstate New York had been unfairly restricted on capital investment, preventing further economic growth and the creation of good-paying jobs, and choking off valuable income for farmers. (Senate Democrats, Flickr/Creative Commons)

ALBANY — U.S. Senator Charles E. Schumer today revealed, following his major push, that the Federal Reserve, Federal Deposit Insurance Corporation (FDIC), Financial Crimes Enforcement Network (FinCEN) and Office of the Comptroller of the Currency (OCC), in tandem with the Conference of State Bank Supervisors, have confirmed the legality of banks and other financial institutions extending services and products to industrial hemp-oriented businesses and farms.

Schumer explained that without access to traditional financial services, local farmers and the industrial hemp industry across Upstate New York had been unfairly restricted on capital investment, preventing further economic growth and the creation of good-paying jobs, and choking off valuable income for farmers. Schumer explained that the lack of awareness by lending institutions about the legality of industrial hemp had created an unwarranted murkiness around the legality of financing hemp-oriented businesses—and that new guidance was urgently needed. With that now cleared up, the industrial hemp industry can continue to seed and grow across Upstate New

“This is a strong step in the right direction to boost the growth of the industrial hemp industry, and I am glad federal regulators, including the Fed, heeded my call to provide clarity to banks that industrial hemp is fully legal and their member banks are free to lend to farmers and producers. Now that the feds have issued to lenders updated guidance clarifying hemp’s legality as a crop, the industry will really start to take root and grow,” said Senator Schumer. “I fought so hard to strip the burdensome and outdated federal regulations from industrial hemp because of all the good it can do for our farmers, our economy and our consumers. Today’s updated financial guidance related to industrial hemp means that we’re one big step closer to the complete emergence of a job-creating, economy-boosting industry across New York State.”

Specifically, the Fed, FDIC, FinCEN and OCC announced that under the Bank Secrecy Act, banks will no longer have to file Suspicious Activity Reports for industrial hemp-oriented businesses seeking to attain loans or other services. Schumer explained that this will significantly increase the likelihood that these businesses receive financial services, and help the industry continue growing and creating good-paying jobs for New Yorkers.

Schumer explained that since the 2018 Farm Bill removed the federal regulatory shackles from industrial hemp production, manufacturing, and selling, New York’s industrial hemp industry has started to grow significantly, with new farms and businesses emerging and existing ones expanding operations. This has brought considerably more good-paying jobs and revenue to Upstate New York, making industrial hemp a critical new part of the state’s agricultural future. That being said, as industrial hemp farmers and businesses are exploring the full benefits of the 2018 Farm Bill, they have experienced serious difficulty accessing financial products with regulatory uncertainty at financial institutions. While some companies have agreed to offer financial services to the growing hemp industry, many have not due to confusion over the crop’s legal status.

The Schumer-backed Hemp Farming Act of 2018 was introduced by Majority Leader Mitch McConnell (R-KY), Sens. Rand Paul (R-KY), Jeff Merkley (D-OR) and Ron Wyden (D-OR). It passed and was signed into law as part of the 2018 Farm Bill. This legislation:

Industrial hemp is a type of cannabis plant that is grown largely for industrial uses, but it can also be utilized for food, oil, and cosmetic products. Hemp contains a very small amount, typically between 0.2 and 0.3 percent of tetrahydrocannabinol (THC), and while from the same species of plant as marijuana, it has varied widely in use. However, due to the existence of THC in hemp, Schumer explained, both plants were considered “controlled substances” under federal law, meaning the U.S. Drug Enforcement Administration (DEA) was the primary regulator for hemp production. Schumer argued that this narrow view has undermined the crop’s agricultural and economic potential. With the Hemp Farming Act of 2018 passed by Congress and signed into law last year, this unnecessary roadblock has been lifted, and industrial hemp’s significant potential to become a cash crop in Upstate New York will be unleashed.

A copy of Schumer’s letter to the Federal Reserve, FDIC, and OCC appears below.

I write to request that the Federal Reserve, Federal Deposit Insurance Corporation (FDIC), and the Office of the Comptroller of the Currency (OCC) provide guidance to financial institutions looking to provide services to the growing hemp industry. In 2018, Congress passed the Agricultural Improvement Act (2018 Farm Bill), removing hemp as a schedule I controlled substance. This law removes the obstacles that have prevented hemp businesses from gaining access to all financial services and products available to other agricultural businesses.

The Hemp Farming Act of 2018, which I was proud to cosponsor and fought to include in the 2018 Farm Bill, did five important things for farmers nationwide, including in my home state of New York. The 2018 Farm Bill removed industrial hemp from Schedule I of the Controlled Substances Act, empowered states to be the principal regulators of hemp, allowed hemp researchers to apply for competitive grants from the U.S. Department of Agriculture, made hemp farmers eligible to apply for crop insurance and allowed industrial hemp to be grown as an agricultural commodity if farmers choose. Since the bill’s passage, the New York hemp industry has grown significantly, as new farms and businesses have emerged and existing ones have expanded. This has brought considerably more jobs and revenue to New York, making hemp an important part of the State’s agricultural industry.  As hemp farmers and businesses are exploring the full benefits of the 2018 Farm Bill, however, their growth has been hampered by regulatory uncertainty at financial institutions that has effectively led to a lack of access to financial products and services.

The enactment of the 2018 Farm Bill legalized the production and sale of hemp, yet financial institutions have continued to question whether they can extend their services to hemp-related businesses. Without access to traditional financial services, such as checking accounts and credit, many hemp businesses have been unable to effectively expand beyond their basic business operations. In order to alleviate these concerns, updated guidance would provide certainty for financial institutions to assess risk and make available a wider range of financial products to hemp cultivators and manufacturers. Small businesses and new entrants are hit hardest by these regulatory uncertainties. It is critical that hemp farmers and businesses have access to adequate financial resources to maintain and grow their operations, if hemp is to become an integral part of the New York agricultural enterprise.

It is important that financial institutions recognize hemp as a legal agricultural industry as set forth in the 2018 Farm Bill. I urge the FDIC, Federal Reserve, and OCC to provide guidance and best practices to the institutions under their authority that are looking to serve hemp farmers and businesses.

Thank you for your consideration of this matter.