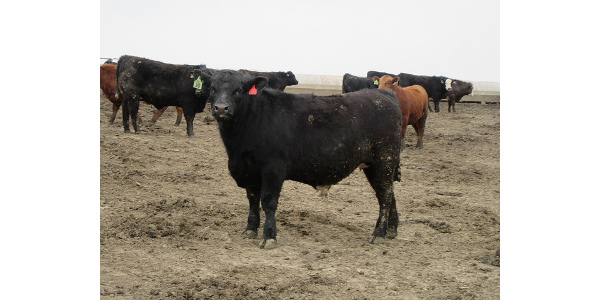 The top steer in the Missouri steer Feedout for Retail Value per Days On Feed and Days of Age was this son of GAR Prophet. His daily gain was 4.53 lbs. graded Choice minus with a Yield Grade of 2.78. (Courtesy of University of Missouri Extension)

MT. VERNON, Mo. — The 2017-18 Missouri Steer Feedout came to a close on June 26 when the Finale event recognized the top steers among the 239 entered. The steers were sent to the Tri-County Steer Carcass Futurity (TCSCF) last November. They were assigned to Kennedy Cattle Company feedlot near Atlantic, Iowa.

Data collection from the time the cattle hit the Kennedy lots to their slaughter at Tyson’s, Dakota City, NE the TCSCF staff and Iowa State monitored the performance of the cattle. Data included weight gain, health treatments, feed consumption on a group basis, disposition while being worked and a variety of carcass measurements.

This feedout had 23 herds represented. They were initially processed at Joplin Regional Stockyards, Carthage, and the Paris Veterinarian Clinic, Paris. A third group joined them in Iowa from Frank Knight, Eminence.

Rather than sending 5 to 15 head, Knight chose to send his entire spring calf crop, 73 head, that included steers and heifers. They were fed in a different Kennedy lot near Atlantic, and the 36 steers had an average daily gain of 4.03 lbs.

Ninety-seven percent made Choice minus or better. Their overall profit was $155.58 on the steers.

During the Finale, results were shown along with many individual steer photos. The top consignment among the 199 co-mingled steers for profitability belonged to Steve Jones, Mt. Vernon. His entry consisted of 7, Angus-sired calves out of Angus x Simmental cows. Jones’ average profit per head was $195.11.

The group average daily gain, from start to finish, was 3.95 lbs. One steer sired by GAR Prophet stood out with the top gain of 4.53 lbs. The TCSCF report includes a unique calculation that shows the steers’ Retail Value per Day On Feed and Retail Value per Day of Age. The Prophet steer also topped the 199 head in each of those categories.

Jones also had the second place steer in RVDOF and RVDOA. His sire was GAR Sure Fire. Others in his group ranked 4th in RVDOA and 6th in RVDOF.

Overall, this set of steers were outstanding and proved it in the feedlot and the packing plant. During the feeder calf grading clinic, last November the Jones’ calves caught the eyes of the graders, market representatives, and the audience. They were chosen by the above to be among the top groups when finished.

The second high-profit group, excluding the Knight steers, came from Carrier’s Muddy Creek Angus, Lockwood. The six head’s average profit was $118.98 led by one steer that had the highest profit in the entire feedout at $408.15. His daily gain was 4.45 lbs. and his carcass graded Choice which gained him the Certified Angus Beef stamp and carcass premiums of $14 per hundred. His yield grade was 2.8. The sire was Worthington Anticipation 422.

The third high-profit group belonged to Gerald Eggerman, South Greenfield. The 12 head were the second high gainers at 3.82 lbs. with six head beating 4 pounds. One steer ranked 3rd on both RVDOF and RVDOA while another placed 7th on RVDOF. Sires of the Eggerman steers were WRR Destination 463 and Clearwater Final Prod 1631.

Daily gains averaged 3.43 lbs. Seventy-four percent of the steers made Choice minus or better on carcass quality grades. Fifty-two percent were yield grades 1 or 2.

“This year’s Feedout cattle performed better than in recent years as death loss and treatment costs were low. Overall, profitability was still in the red at $38.69 per head for the feeding phase,” said Eldon Cole, a livestock specialist with University of Missouri Extension.

Most of the participants enter the program seeking performance data to use in breeding stock selection, marketing feeder calves and breeding stock.

“A profit during the feeding phase is icing on the cake,” said Cole.

The complete story of the feedout that includes pictures of each group and their performance may be seen via a Power Point show at http://extension.missouri.edu/lawrence.

The Missouri Steer Feedout is a joint effort between University of Missouri Extension, Missouri Department of Agriculture, Missouri Cattlemen’s Association in cooperation with the Iowa Tri-County steer Carcass Futurity. The next feedout begins November 6 with entry deadline October 10. Contact your nearest Extension livestock specialist for details.

AFGC to celebrate it 75th anniversary