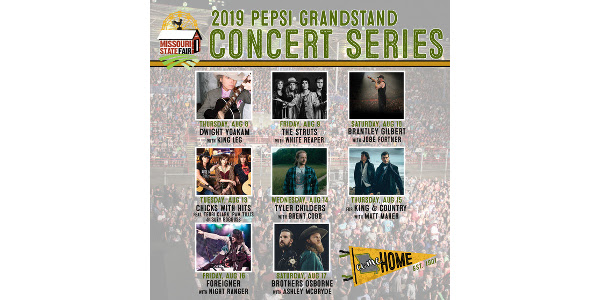 Dwight Yoakam will kick off the Fair with his performance on Opening Day, Thursday, Aug. 8. Yoakam has sold more than 25 million albums worldwide, and is a 21-time nominated, multiple GRAMMY Award winner. He has 12 gold albums and nine platinum or multi-platinum albums, with five of those albums topping Billboard’s Country Albums chart and another fourteen landing in the top 10. Concert fans will no doubt recognize his hits like “Guitars, Cadillacs,” “A Thousand Miles from Nowhere,” and “Streets of Bakersfield,” among numerous others. Opening for Yoakam is high plains rocker from Nebraska, King Leg. Tickets for the Aug. 8 show start at $25.

Friday, Aug. 9 the Pepsi Grandstand stage will be rocking with The Struts with opener White Reaper. Formed in Derby, England, in 2012, the Struts almost instantly drew a major following with their outrageous live show. After making their full-length debut with 2016’s “Everybody Wants,” The Struts returned with “YOUNG&DANGEROUS,” a sophomore album that cements their status as one of the most unstoppably passionate and endlessly thrilling bands making rock music today. The band has opened for major rock legends such as The Rolling Stones, The Who, Guns N’ Roses, and was hand-picked by Motley Crue to serve as the supporting act for their last-ever performance. Tickets for the Aug. 9 show start at $25.

Brantley Gilbert will take the stage on the Fair’s first Saturday, Aug. 10. Gilbert, who is only one of four country artists with back-to-back platinum certified albums, will excite concertgoers with his songs that speak to the heart of blue collar life in the 21st century; hard working, fun-loving and deeply committed to the people he loves. His list of top hits include No. 1 country singles “Country Music Must Be Country Wide” and “Bottoms Up” and “Small Town Throwdown” and “One hell of an Amen,” which were both certified gold in the U.S. Opening for Gilbert is country singer and songwriter Jobe Fortner, whose self-titled EP was released in early 2018. Tickets for the Aug. 10 show start at $35.

All Pepsi Grandstand tickets go on sale to the public starting June 25. Individuals can sign up as a Fair Fan on the Fair’s website, mostatefair.com, for information about concert ticket presale opportunities and other Fair news.

These three shows join previously announced concerts for the State Fair including Chicks with Hits featuring Terri Clark, Pam Tillis and Suzy Bogguss on Aug. 13, Tyler Childers with Brent Cobb on Aug. 14, for KING & COUNTRY with Matt Maher on Aug. 15, Foreigner with Night Ranger on Aug. 16 and Brothers Osborne with Ashley McBryde on Aug. 17.

The 2019 Missouri State Fair will be held Aug. 8-18 in Sedalia. More information including special events, promotions and grounds entertainment are expected to be announced in the coming weeks. For more information about the Fair, visit mostatefair.com.

Ragged stand better than no stand