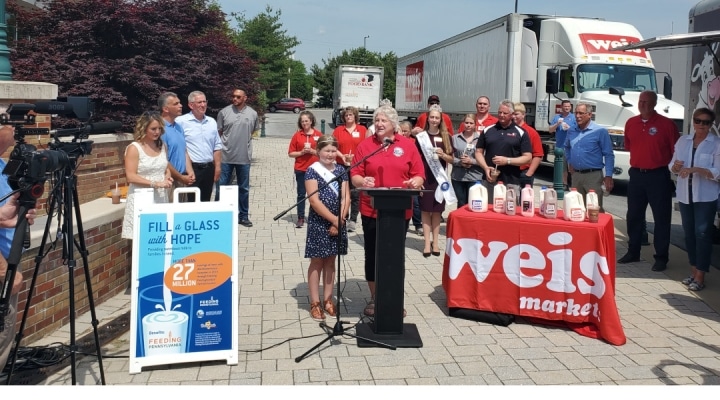 SYRACUSE, N.Y. — Dairy farmers are partnering with four major retail chains during National Dairy Month to encourage consumers to donate to Fill a Glass with Hope® to help get milk to families who need and want it. American Dairy Association North East implemented the campaign with Price Chopper, Safeway, ShopRite and Weis Markets – in 476 stores across the region.

“Milk is one of the most requested items at food banks, but one of the least donated because of its perishability,” said ADA North East CEO John Chrisman. “Dairy farmers recognized this need in their local communities and helped initiate the charitable campaign to help their neighbors.”

“I’m proud to have represented my fellow dairy farmers to highlight the importance of the Fill A Glass With Hope campaign,” said Zug. “This initiative showcases our dedication for producing wholesome, nutritious milk, and also for ensuring it is accessible to families in our communities throughout the state.”

Nate Chittenden of Dutch Hollow Farm, Schodack Landing, N.Y., participated in the kick-off for the retail campaign in New York City. The launch that included former New York Giants player Amani Toomer and the Oreo Cookie Man, was held at a Fairway Market on Broadway, as part of a larger campaign through ShopRite.

Chrisman recorded promotional video for the June Fill a Glass with Hope campaign that has been shared on all ADA North East social and digital media outlets. It can be seen here.

Fill a Glass with Hope was established in 2015, as a partnership between dairy farmers through ADA North East, Pennsylvania Dairymen’s Association and Feeding Pennsylvania to make the campaign a reality. Since then, more than 27 million servings of milk have been distributed.

Visit AmericanDairy.com and click “For Retailers,” for more information on Fill a Glass with Hope.