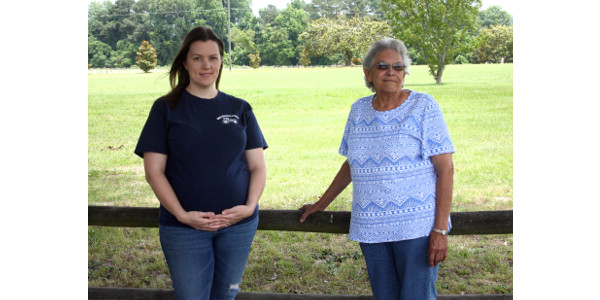 Tyler Geer works to determine what is creating taste and odor issues in water coming out of the Six and Twenty Cove of Hartwell Lake. (Image Credit: Denise Attaway / Clemson University)

CLEMSON, S.C. — A Clemson University graduate student helped determine what was causing taste and odor problems with drinking water drawn from Hartwell Lake and is working to address them.

Tyler Geer, a wildlife and fisheries biology student who has lived in Clemson all of his life, was part of a team that worked with the Anderson Regional Joint Water System to develop and implement a plan to control the source of taste and odor in the lake.

“During summer months, the drinking water they were providing had a very earthy, musty odor to it,” Geer said. “It was really unsatisfactory to a lot of customers and they were getting a lot of complaints about it.”

The Anderson Regional Joint Water system can treat taste and odor compounds with its water treatment plant, but the problem in the lake got so bad the in-house treatment processes couldn’t keep up. Officials sought help from Geer and his research team.

“The Clemson University team’s research helped the Joint Water System gain a solid understanding of the underlying problem and develop effective and affordable treatment solutions to manage the algal issues in the source water,” Willett said. “Since the implementation of the treatment protocols, we have been able to successfully control taste and odor events caused by algal blooms at significantly less cost.”

Identifying the source of the problem was one of the first things the team did.

“We found the taste and odor were coming from two compounds in particular,” Geer said. “These compounds are 2-methylisoborneol, or MIB, and geosmin.”

The two compounds causing the problem are naturally occurring alcohols that were being produced by blue-green algae and diatoms. Humans are very sensitive to the compounds and can smell them even at low concentrations, Geer said.

The team collected water samples from the Six and Twenty Creek cove where the water intake for Anderson Regional Joint Water System is located.

“We found the majority of the compounds were present at the bottom of the water column,” Geer said. “So we tested some rocks and logs from the bottom and found them covered with algae. We determined that’s where the bulk of the odor was coming from.”

The team took some of the algae back to its lab and found the compounds. The algae are not hazardous to human or animal health, but the algae do produce bad smells and taste. When they reach this level, intervention is required.

“We determined an adaptive resource management program was needed to control production of taste and odor in the water in the Six and Twenty Creek cove before MIB and geosmin got to the water treatment plant,” Geer said.

The management program Geer and his team came up with involved implementing a refined algaecide application plan. By controlling the algae responsible for MIB and geosmin production in the lake itself, the algaecide application would complement in-house processes the Anderson Regional Joint Water System was already using to treat the compounds. The algaecide used is safe for humans and animals.

An algaecide was applied using weighted trailing hoses to the bottom of the water column to “get the algaecide to the algae,” Geer said. That reduced the algae and geosmin so that it was no longer detectable. MIB concentrations remained stable. A second treatment was applied and the MIB level dropped. However, within four weeks of treatment, both MIB and geosmin levels increased to unacceptable levels.

“After these levels increased, we treated the water for a third time,” Geer said. “This caused the concentrations of the compounds to decline.”

Because of the work of Geer and his team, algaecide applications are periodically used to manage taste and odor compounds in the portions of the Six and Twenty Creek cove. The water is continually monitored and tested to keep track of the growth of algae as well as production of MIB and geosmin to determine the most appropriate times to apply the algaecides.

“The algaecide used is a copper-based formula,” Geer said. “This formula is used to control a broad range of algae and cyanobacteria growth in water. In conjunction with in-house treatment of MIB and geosmin using this formula in Lake Hartwell to target producers of the compounds has helped Anderson Regional Joint Water System to continuously provide quality drinking water.”

A treatment plan for taste and odor control can be found on the Anderson Regional Joint Water System’s website, http://bit.ly/2prKnSy.