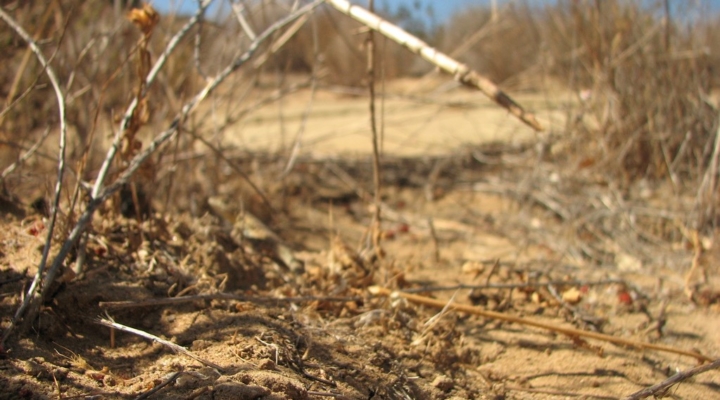 Over the past decade, Iran has seen the most prolonged and severe drought in more than 30 years, according to the U.N.'s Food and Agriculture Organization. An estimated 97 percent of the country has faced some level of drought, Iran's Meteorological Organization says. (Fred Rockwood, Flickr/Creative Commons)

VARZANEH, Iran (AP) — The small group of Iranian farmers gathered around their tractors — long idle, parked at the town entrance next to a canal that once irrigated their fields but has been dry for years — and they protested, pleading for help from the government.

“We are the people,” shouted Mostafa Benvidi. “Help the people. At night they go to bed hungry!” They held signs addressing officials they blame for their dried-up fields. “How long will you eat your bread made with our blood?” one sign read.

Every day, farmers hold their small protest outside Varzaneh. It’s a sign of the anger that has been growing over water shortages caused by a years-long drought but worsened, experts say, by government mismanagement.

Protests have gotten larger, with bursts of violence, at a time when economic woes in the country from inflation to unemployment have fueled unrest repeatedly over the last year.

In March, Benvidi lost sight in his left eye and has more than 100 pellet shots in his body, suffered during clashes between police and farmers who held a sit-in strike in Varzaneh. Earlier this month, in another part of southern Iran, 11 people were wounded when police broke up a protest in Khorramshahr, where residents complain of brown water coming from their taps.

“Officials just come and promise to deal with the crisis and then just leave,” said the 30-year-old Benvidi.

He and his family of six siblings and their father used to rely on their 3-hectare farm, planting barley, wheat, corn and cotton. But they haven’t been able to farm for years because of lack of water. Now Benvidi is unemployed, and his family lives off the seasonal construction work his brothers get in nearby towns and his sister’s carpet weaving.

Over the past decade, Iran has seen the most prolonged and severe drought in more than 30 years, according to the U.N.’s Food and Agriculture Organization. An estimated 97 percent of the country has faced some level of drought, Iran’s Meteorological Organization says.

Isfahan province, where Varzaneh is located, and neighboring provinces in central Iran have been hit particularly hard.

The Zayandeh Roud river once watered this region, flowing down from the Zagros Mountains, through the city of Isfahan and through a string of farming towns like Varzaneh and its suburbs, home to 30,000 people, some 550 kilometers (340 miles), south of the capital Tehran.

But it dried up years ago. The fields around Varzaneh are now stretches of desiccated, salt-laced dirt. The cattle are gone. Around 90 percent of the farming activities in the district have faded away, said Reza Khalili, an environmental activist in Varzaneh.

Government policies have worsened the strain caused by drought and growing population, Khalili and other experts say. Authorities are building more factories, sucking up large amounts of water. In July, officials cut ribbon of another phase of a steel mill in Isfahan. Water has also been diverted to other regions.

“The water cycle has been annihilated. All the water of the river has been allocated to industry,” Khalili said.

Outside of Varzaneh once stretched the Gavkhouni wetlands, a swamp fed by Zayandeh Roud. Until a decade ago, it was a home for migrating birds, including flamingos. Now much of the 470-square kilometer (180 square mile) wetlands has shriveled into salty fields that kick up sandstorms blowing over the region. Khalili warned that the dirt contains traces of mercury, lead and cadmium.

Habib Ramazani, a 57-year-old who was at the protest with Benvidi, said he and his family used to get by farming wheat, cotton and beetroot. He hasn’t farmed for years now.

“I am speechless. No official pays attention to our miserable situation,” said Ramazani, a father of five.

The town boasts of sending hundreds of its young men to fight in the long Iran-Iraq war in the 1980s — Ramazani was among the volunteers. A smaller town then, more than 100 of its boys were killed in the fighting, and their posters still adorn the streets.

Now young men emigrate in search of a better life.

“Many of my friends moved to near and far towns to find jobs,” said Ruhollah Sohrabi, a pistachio farmer who now works as construction worker in other cities.

In 2012, farmers in Varzaneh clashed with police and broke a water pipe that transports 50 million cubic meters of water a year from Isfahan to the neighboring province of Yazd.

Similar protests continued from 2016 to now. At one point, the government paid around $250 to each family hit by the crisis, a step criticized as a band-aid rather than a solution.

“More social conflict may be on the way. Officials do not have the necessary expertise to manage water resources,” said Hamid Safavi, a professor of water resources management and environmental engineering at the Isfahan University of Technology.

He said each province decides on its own how to use their water, without looking at the impact on the resources.

Unless policies change, “we are heading from a water crisis to a disaster,” he said. “This is not conjecture. It is a certainty.”

The Zayendeh Roud river once was the pride of Isfahan city, running under its historic bridges, most famously the Si-o-seh Pol, a 400-year-old bridge named for its 33 arches.

Now it is a barren strip of caked dirt through the city center.

Iraj Rostami stood under of the arches in the Si-o-seh Pol on a recent day, singing. He used to come here often with wife and children to admire the scenery. Now he rarely stops there. “It is gradually changing to a place for homeless and addict people,” he said. “It’s sad.”

“I have lost my spirit. People are depressed,” she said. “I hope water and beauty return before my death.”

Pasture management in a drought
July 8, 2020