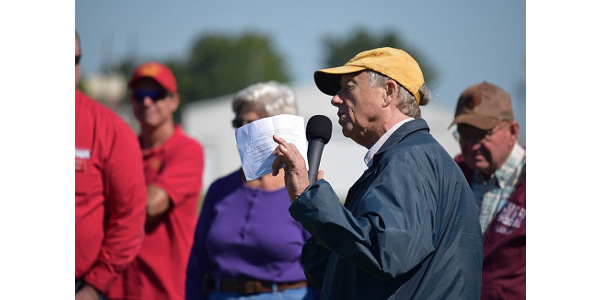 Faced with the same issues as farmers, most of the 13 research farms decided to include weather-related topics for their field days, including delayed and prevented planting, weed and nutrient management, cover crops and harvest considerations. (Courtesy of ISU)

AMES, Iowa — A wet growing season caused challenges for farms across the state in 2019, including at Iowa State University’s Research and Demonstration Farms.

Faced with the same issues as farmers, most of the 13 research farms decided to include weather-related topics for their field days, including delayed and prevented planting, weed and nutrient management, cover crops and harvest considerations.

Despite the challenging year, field day attendance topped 15,300, on par with previous years.

“This past year was very wet, so the topics, to some degree, had to do with the weather,” said Mark Honeyman, associate dean for operations at Iowa State University.

Many of the research farms experienced delayed planting, but by August and early September the state saw an extensive dry period, followed by the return of heavy rain in late September.

By fall, the field days were focusing on how to deal with crops in differing stages of maturity, from one field to another, and late harvest considerations, according to Virgil Schmitt, field agronomist with ISU Extension and Outreach.

Because the farms are spread across the state, they give producers in each region a realistic look at how an idea might work on their own farm. More than 130 Iowa State faculty members use the farms for teaching, research and extension.

“If you can see it, you learn so much more than just hearing about it,” said Honeyman. “Seeing is a powerful educational tool.”

Three of the field days featured a talk by Dan Robison, holder of the Endowed Dean’s Chair in the College of Agriculture and Life Sciences at Iowa State University. Robison began his duties as dean in January, and made an effort to visit the farms during field days, and on other occasions.

Focus on the future

The research farms also attracted several hundred high school students in 2019, during youth-oriented field days. More than 650 youth attended field days in September, where they were exposed to the science and technology of agriculture, as well as potential careers.

Honeyman said it’s important to reach out to non-traditional audiences, including the youth, so that the farms can provide maximum learning opportunities for the public.

Several new improvements are underway or in planning stages at the research farms, and within the university.

The farm at Crawfordsville is planning a new education/shop building, and Iowa State is actively building a new poultry research farm near Ames, named the Robert T. Hamilton Poultry Farm, a rolling high tunnel at the Horticulture Station, Ames, a materials storage structure at University Compost Facility, Ames, and a renovation of the beef cattle feedlot facilities near Lewis.

Numerous new water quality research layouts have also been installed this summer including a bioreactor at the farm near Sutherland, several saturated buffers near Boone and two sets of individually tile drained plots near Ames.

In September, 2019, the university broke ground for the new Feed Mill and Grain Science Complex in Ames, with an expected completion of summer to fall of 2021.

The research farms will kick off the 2020 field day season in the spring, with dates and locations to be announced.