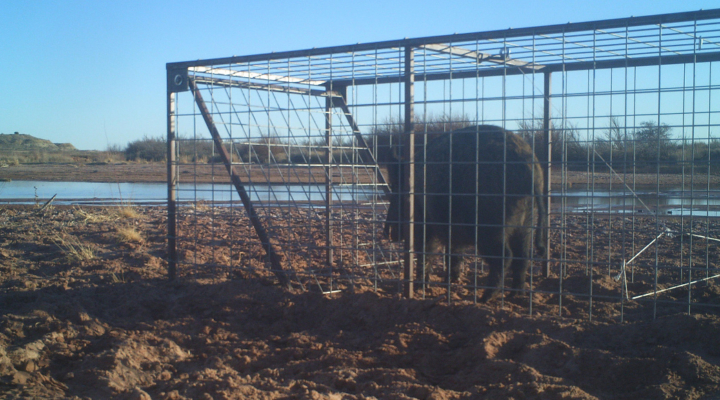 The feral swine are lured into the six or eight-panel trap by bait (usually corn) and trapped in the pen after triggering the trip wire which drops the gate. (U.S. Department of Agriculture, Flickr/Creative Commons)

The head gates were paid for by a combination of sponsorships and fees collected from the captive feral swine hunting licenses as part of the Feral Swine Control act, Additionally, Oklahoma Soybean Check-Off  sponsored fifty of the 100 trap gates.

In addition to the welded head gates, each conservation district is receiving monetary assistance for the remaining trap supplies.

The feral swine are lured into the six or eight-panel trap by bait (usually corn) and trapped in the pen after triggering the trip wire which drops the gate. A variety of techniques are used by Wildlife Services to manage feral swine, but trapping is considered one of the most effective methods in states like Oklahoma with high feral swine populations because of the ability to eliminate multiple hogs at one time. Last year, Wildlife Services eliminated 11,206 feral swine in Oklahoma and is on track to exceed that number in 2017.

Feral swine are an invasive species that cause more than $1.5 billion annually in damage and management costs nationwide according to USDA. Elimination of feral swine is of special interest to the conservation districts because feral hogs’ rooting and wallowing activity is proven to increase erosion, especially in wetlands and along waterways. Large groups of feral swine are responsible for contaminating water sources through deposition of fecal material in concentrated areas which results in an increased risk for disease among humans, wildlife, and livestock.