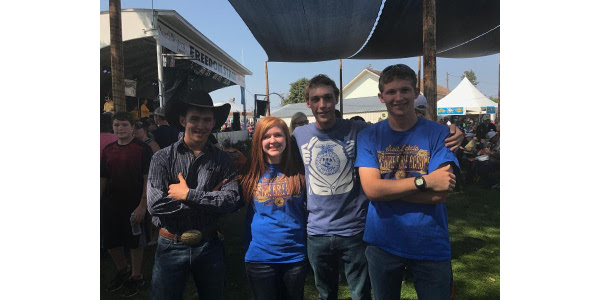 The team was recognized with a cash prize.

The Team Up For Safety competition is run in a game-show format and held each year as a fun reminder to teens to keep safety top of mind.

“For most of us in South Dakota, we like to think we’re pretty in tune with what’s going on around us,” says Doug Sombke, South Dakota Farmers Union President. “But life moves pretty fast and it’s easy to take little things for granted. It could be something as simple as just taking the time to read labels on chemicals or applications and making sure you don’t harm yourself or your livestock.”

Along with Sunshine Bible Academy other FFA Chapters to compete included; Tri-Valley, Wolsey/Wessington and Viborg/Hurley. These teams qualified for the quiz bowl during the 2017 State FFA Convention held in Brookings this April.

“You have to have fun with it and you have to learn something,” says Tri-Valley FFA member, Levi Burggraff who farms and ranches with his family near Colton and competed on the qualifying team this April. “You need to know what you’re doing on a farm, because it’s dangerous. You can’t be horsing around cattle or machinery. I want to keep things calm…and keep all my limbs.”