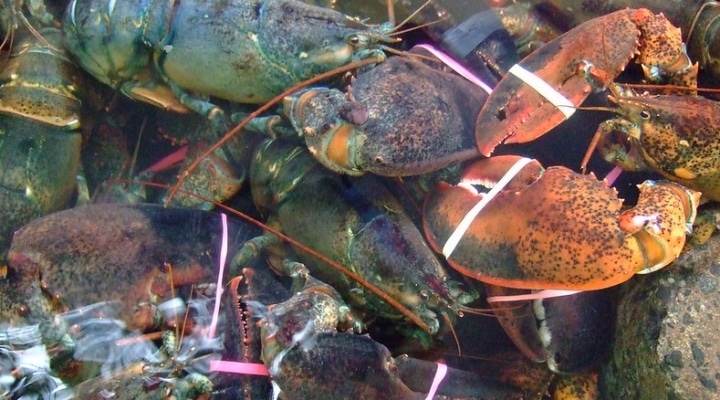 The fishery is still soaring above where it was in the 2000s, when it typically trapped 50 to 80 million pounds of lobsters, said Kristan Porter, a lobsterman and president of the Maine Lobstermen's Association. (ann-dabney, Flickr/Creative Commons)

ROCKPORT, Maine (AP) — Maine’s lobster catch dipped in volume in 2019, but remained above historic levels as the industry dealt with numerous challenges and a slow start to the season.

Fishermen from the state caught 100.7 million pounds of lobster last year, the Maine Department of Marine Resources announced Friday at the annual Maine Fishermen’s Forum in Rockport. The catch was worth more than $485 million, the fourth highest in history.

The previous year’s catch was slightly more than 121 million pounds. The catch has been more than 100 million pounds every year since 2011 after having never topped that number previously, though the 2019 total was the lowest since 2010. The fishery is still soaring above where it was in the 2000s, when it typically trapped 50 to 80 million pounds of lobsters, said Kristan Porter, a lobsterman and president of the Maine Lobstermen’s Association.

“When we were getting to 90 to 100 million pounds, we were celebrating. Now if we’re in that range, people are going to think it’s bad,” Porter said. “But it’s still really high for the average of the fishery.”

This year’s lobster haul was hindered by a phenomenon fishermen call a “late shed.” The lobster catch typically picks up when many of the lobsters shed their old shells and reach legal size, and this year that happened later than usual, Maine Department of Marine Resources Commissioner Patrick Keliher said. The delay was the result of a cold spring, he said.

Members of the lobster fishing business also had to contend with ongoing difficulties such as getting access to enough bait, which is usually small fish such as herring and menhaden. The industry has also dealt with stresses that don’t directly effect the size of the catch, such as the economic ramifications of President Donald Trump’s trade hostilities with China. China is a major buyer of lobsters, and members of the industry hope a thawing of trade relations earlier this year will reinvigorate exports.

Maine is by far the largest lobster fishing state, and lobsters remain critically important for the state’s economy, said Gov. Janet Mills, a Democrat. The crustaceans are one of the most valuable fisheries in America, and demand for them has buoyed prices in an era of high catches and strong availability.

“Our lobster industry continues to be one of the most important economic engines in Maine and its reputation is worldwide,” Mills said.

The future will most likely bring new fishing restrictions. Maine officials submitted a plan to the federal government designed to meet a requirement to better protect rare North Atlantic right whales from entanglement in gear. The National Oceanic and Atmospheric Administration has told the state the proposal doesn’t go far enough, but state officials have disputed that claim.

Maine’s lobster catch has also grown at a time when the waters of the Gulf of Maine have warmed faster than most of the world’s oceans. That has fueled concerns that the surge in catch could be temporary as the lobster population continues to move north. The once-strong southern New England lobster fishing industry has dwindled while Maine’s has grown.