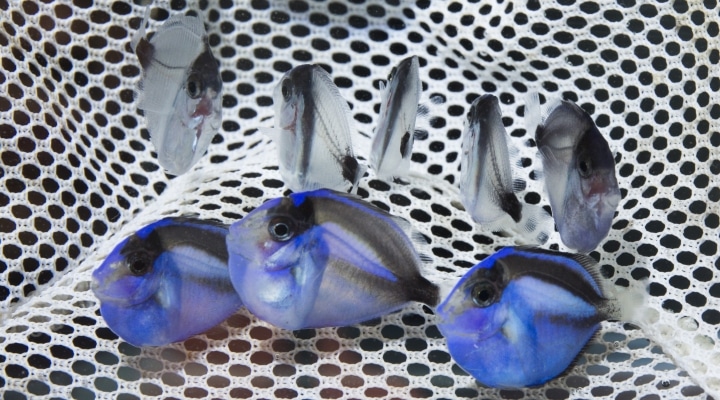 Most of the fish in home tanks come from fresh water. Only about 10% are raised in salt water, according a new UF/IFAS Extension document. However, the saltwater sector of the industry has increased substantially in recent years, UF/IFAS faculty say.

GAINESVILLE, Fla. — Tropical fish hobbyists are pretty serious about their pastime. So much so that it’s a $40 million-a-year industry in the United States.

Most of the fish in home tanks come from fresh water. Only about 10% are raised in salt water, according a new UF/IFAS Extension document. However, the saltwater sector of the industry has increased substantially in recent years, UF/IFAS faculty say.

Freshwater fish outnumber saltwater fish in aquariums, primarily because they can be easier to culture and maintain, UF/IFAS researchers say. In fact, through research at places like the UF/IFAS Tropical Aquaculture Laboratory (TAL), more saltwater fish are being raised for aquariums, as opposed to be captured in the wild.

Scientists are spending more time researching saltwater fish, said Matt DiMaggio, a UF/IFAS assistant professor of fisheries and aquatic sciences at TAL, which is part of the UF/IFAS School of Forest Resources and Conservation. That might be one reason their availability has risen recently.

“It seems to be a matter of preference,” Cassiano said. “I think an increased appreciation of the ocean, particularly in the past two decades, has led to an increase in demand for saltwater fish. More people are becoming aware of the wonderful array of fish available and that has piqued interest. I wouldn’t say people prefer freshwater over saltwater. Traditionally, the entry level aquarist would begin with a freshwater tank, but that is changing as the hobby equipment becomes more efficient and, again, desire on the part of the consumer to have saltwater critters.”

Florida produces a large share of the fish-farm-raised ornamental marine species in the nation.

In fact, Florida leads the nation in marine ornamental fish sales, with $6.5 million. Hawaii is a distant second with $160,000 per year in sales. In 2018, the total value of ornamental fish sold by farmers in the U.S. was estimated at $41.3 million, according to 2019 figures from the U.S. Department of Agriculture-National Agricultural Statistics Service.

DiMaggio, Cassiano and Liz Groover — who graduated in 2018 with a master’s degree in fisheries and aquatics sciences, part of the UF/IFAS College of Agricultural and Life Sciences — just published the new UF/IFAS Extension paper. It focuses on the most-commonly cultured marine ornamental fish – saltwater fish raised on Florida aquaculture farms. Those families of fish include Dottiebacks, Gobies, Blennies, Seahorses and tangs, including the famous Blue Tang.

Yes, that’s the same Blue Tang as Dory in the 2016 movie, “Finding Dory.” Researchers at TAL worked with other scientists to breed the first Pacific Blue Tang. TAL faculty want the public to know about the Blue Tang success and about the wonders of aquarium fish in general.

“We want to inform people about the benefits of aquariums as a hobby and as a teaching tool for children,” DiMaggio said. “We also want people to purchase more fish grown in Florida. That way, they would be supporting local agriculture.”