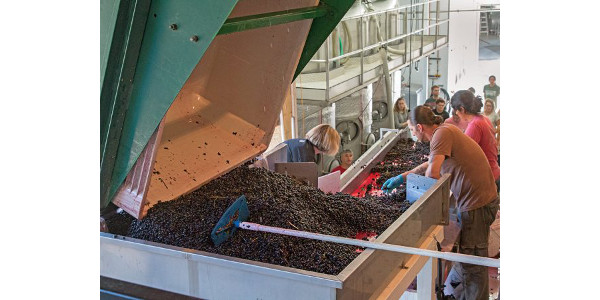 Students observe as red grapes harvested from the Wollersheim Winery vineyard are sorted prior to crushing and destemming. (Photo by Ben Vincent)

MADISON — As the one and only enologist, or wine scientist, on the UW–Madison campus, a large part of Nick Smith’s job is guiding a group of hopeful undergraduates through Food Science 552 — and toward their futures in winemaking and other jobs in the fermented food and beverage industries.

Students who took Smith’s fall 2017 course, “The Science of Wine,” emerged with a solid understanding of the chemistry and microbiology behind the winemaking process. But they also went beyond lecture-style learning to get a real taste for the process of fermentation.

“A key element of the class is to teach the production process,” Smith says. “How does the chemistry impact the final product?”

During the semester, students took two trips to Wollersheim Winery in Prairie du Sac, Wisconsin, where they learned about production procedures and bottling. Back on campus, students broke into small groups, each tasked with creating one of three different wine styles — sparkling, red, or white.

“[The course gave] me a greater appreciation for winemaking, and I found it very interesting to compare the winemaking and beer-making processes, as they have a lot in common,” says Miles Gillette BSx’18, a senior majoring in food science. He was first inspired to select his major after dabbling in homebrewing of beer, a process he calls “hands-on microbiology.”

Food Science 552 is just one component of the UW–Madison’s new Science of Fermented Food and Beverages certificate program, which was made available to undergraduate students for the first time in the 2017-18 academic year.

The certificate is an option for students pursuing various science majors — food science, microbiology, biochemistry, and others — who want to delve deeper into fermentation. As they progress through the program, students learn about the various scientific aspects involved in fermentation.

Food Science 410, for example, teaches them about the chemical components of food constituents like proteins, lipids, carbohydrates, and enzymes. They also learn about the latest techniques and technology used to produce fermented beverages such as wine, beer, and cider, as well as fermented foods like cheese, bread, and pickles. The hope is that such a comprehensive suite of courses will give graduates a competitive edge in the field.

“The dream is to make UW–Madison the top college when it comes to the fermentation sciences,” says David Ryder, former vice president of brewing and research at MillerCoors and an expert on fermentation and yeast physiology. Ryder was instrumental in coordinating the donation of pilot-scale beer brewing equipment from MillerCoors to UW–Madison in 2008, and he has been a steadfast advocate for the development of the university’s fermentation sciences program, including the new certificate.

Long viewed as a major national center for the beer and cheese industries, Wisconsin is also home to other major manufacturers of fermented goods. The state boasts a growing wine industry, with around a dozen new wineries opening each year. Every bottle of Kikkoman Soy Sauce sold in North America is brewed and bottled at the company’s factory in Walworth. GLK Foods, headquartered in Appleton, is the largest producer of sauerkraut in the world. The scope of the industry in the state is only likely to expand. And that requires trained workers, specialists, and experts in the field.

“With the prominence of all the fermented food and beverage industries we have, we [aim to] start filling the niches and educational needs,” says Smith.

Smith arrived at UW–Madison in March 2015 after spending eight years as an experimental winemaker at the University of Minnesota. The initial funding for his position was secured through a Specialty Crop Block Grant from the Wisconsin Department of Agriculture, Trade and Consumer Protection with the support of the state’s key wine organizations. Beyond his teaching duties on campus, Smith works directly with winemakers to assess and improve their wines, helping to troubleshoot problems, as needed.

This hands-on experience is also a boon for Smith’s students, who participate in the development of various fermented products while earning their certificates. Students in Food Science 551 participate in a beer design and brewing competition offered in collaboration with the Wisconsin Brewing Company (WBC) of Verona, Wisconsin. This partnership has yielded a new WBC beer in each of the last three years. The collaboration’s 2017 brew, Red Arrow, proved so popular that the initial batch sold out in a matter of weeks.

Wollersheim Winery is also a partner in the fermentation sciences program. The company sends grapes to campus for students to make into small batch wines and hosts students so they can observe what’s involved in full-scale wine production.

With the new certificate program, UW–Madison is better positioned to be a wellspring of talent, research, and creativity to support the state’s fermentation-related companies, according to program coordinator Monica Theis MS’88.

“Our vision is that Wisconsin is the place to go to learn about the science of fermentation and that our graduates leave here with a competitive edge,” she says.

Weighing the importance of NAFTA vs China