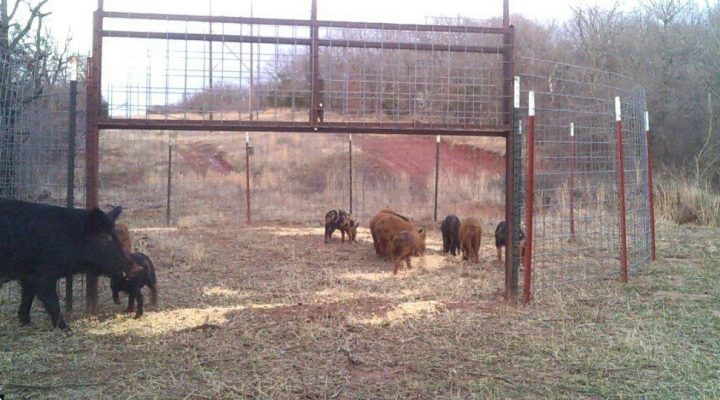 In 2016, feral swine make their way toward and into a trap set up by Russell Anderson of Wildlife Services in Oklahoma County. (Courtesy Photo)

OKLAHOMA CITY — The Wildlife Services Division of the Oklahoma Department of Agriculture, Food and Forestry (ODAFF) went toe to tusk in the battle against feral swine in 2016.

The effort put forth on behalf of Oklahoma agricultural producers and urban residents resulted in 44 percent more feral swine eliminated during 2016 than in the previous year.

“The damage they do, not only affects agriculture, but personal property such as lawns and gardens and natural resources as well,” said

“Methods used to mitigate feral swine populations included corral trapping, aerial gunning utilizing fixed wing and rotor wing aircraft, and shooting which implemented the use of night vision and FLIR (thermal) technology,” Alls said. “The increase in take is a result of the increased requests for services by landowners and ranchers across the state.”

Feral swine are a non-native invasive species to Oklahoma that detrimentally impacts agricultural production and natural resources in Oklahoma. Because of feral swine, citizens of Oklahoma suffer damage to crops, livestock and wildlife habitat. Feral swine also pose a health risk to humans, livestock, companion animals and native wildlife. The department’s goal is to render the state of Oklahoma free of feral swine.

Managing wildlife to reduce damage to agriculture and property, minimize threats to public health and safety, and help protect natural resources including endangered species is an important goal of ODAFF’s Wildlife Services Division.

Professional wildlife technicians and biologists employed by the Wildlife Services program strive to develop and use integrated wildlife damage management strategies that are biologically sound, and socially acceptable.

The battle of addressing the issue of feral swine is ongoing.