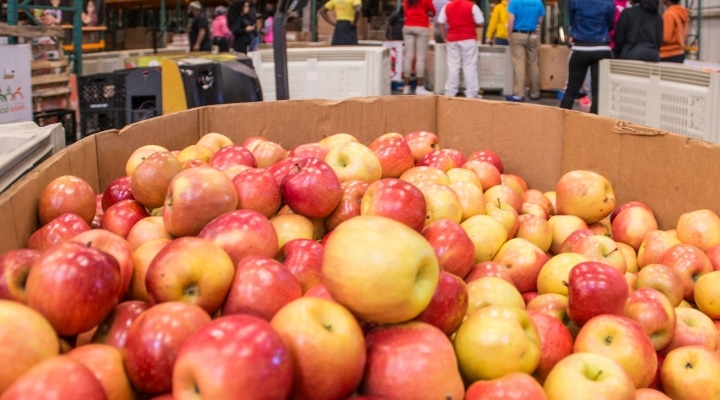 Governor Cuomo's Nourish New York program provides $25 million to the state's emergency food providers to help them buy surplus products from the state's farmers and producers, who lost markets for their products due to the pandemic. (Stock photo via U.S. Department of Agriculture, Public Domain)

ALBANY — New York State Commissioner of Agriculture Richard A. Ball announced that Feedmore WNY, the hunger relief organization serving Cattaraugus, Chautauqua, Erie and Niagara counties in Western New York, achieved a milestone as its purchases of surplus milk and food through the Nourish New York program passed 800,000 pounds since the start of the emergency food program in May. This includes 174,231 pounds of milk and dairy products and 462,241 pounds of produce, such as such as cabbage, green beans, salad greens and prepacked produce boxes of apples, cucumbers, potatoes, squash, onions, peppers and tomatoes. FeedMore WNY also purchased meat and surplus shelf-stable commodities with these funds, the agency’s purchases of New York agricultural products totaling $1.6 million to date.

In addition, Feedmore WNY has implemented a voucher program in partnership with Upstate Niagara Cooperative that has so far provided people the opportunity to receive more than 34,000 half gallons of milk at cooperating retail outlets.

Commissioner Ball said, “By connecting people and producers during a time of severe economic difficulty, Nourish New York is making a big difference — keeping farm businesses alive and bringing food to those in need. I commend Feedmore WNY for involving Western New York farms in this important effort to feed their communities.”

Tara A. Ellis, president and CEO of FeedMore WNY, said , “FeedMore WNY has distributed nearly 10 million pounds of food since the pandemic hit the Western New York region – a 47 percent increase compared to what we usually distribute this time of year. As FeedMore WNY continues to work tirelessly to respond to the increased need for food assistance in the community as a result of the pandemic, we are grateful for the partnership of New York State and the Nourish New York program. Because of this critical program, we have been able to provide a variety of nutritious food to hungry children, families and older adults throughout Western New York.”

Governor Cuomo’s Nourish New York program provides $25 million to the state’s emergency food providers to help them buy surplus products from the state’s farmers and producers, who lost markets for their products due to the pandemic. Those agricultural products are then provided to New York consumers, many of whom were thrown into financial crisis by the COVID-19 outbreak, at drive-through food distributions, and through food box and school meal programs.

Kevin Richardson, Vice President of Sales and Operations for Agbotic Inc., said, “Agbotic Inc. extends our appreciation to Governor Cuomo, his administration and FeedMore WNY for their efforts regarding the Nourish New York program. During a time of uncertainty, this program was a lifeline for local growers. Through this partnership, we are able to provide more than 400 pounds of organic produce each week to hungry community members who rely on FeedMore WNY. The Nourish New York program has also been critical in ensuring our business and hardworking employees can continue to operate during this pandemic.”

Since the beginning of the Nourish New York program in May, Feedmore WNY has held 285 mobile food distributions in Cattaraugus, Chautauqua, Erie and Niagara Counties. The non-profit agency has also continued to supply food pantries and distribute food from other sources. Information on upcoming distributions, food pantry locations, and more can be found here.

Through October 21, Nourish NY has provided funding to New York’s food banks to purchase more than 14.1 million pounds of surplus products. Food banks across the state have purchased more than $17.5 million in Nourish NY product from New York’s processors and farmers who have temporarily lost markets as a result of COVID-19.

Nominations open for NYAITC Teacher of the Year Award