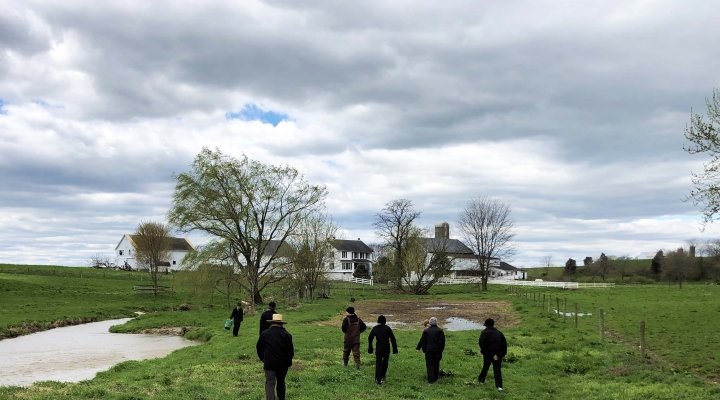 “Restoring the Halfmoon Creek and Pequea Creek watersheds, which feed into the Bay, are excellent examples of how improving local water quality benefits central Pennsylvania communities as much as the Chesapeake Bay,” said CBF Federal Executive Director Denise Stranko. “We commend Senators Bob Casey (D-Pa.) and Ben Cardin (D-Md.) for their steadfast commitment to the Bay and its waterways.”

The senators requested $2.18 million for the Pequea Creek Watershed restoration plan in Lancaster and Chester counties. Senator Casey sought an additional $1.06 million for the Halfmoon Creek Watershed restoration plan in Centre and Huntingdon counties. It was the first time in a decade that senators were able to request funds for specific projects in annual appropriations bills.

Increased state and federal investments in Pennsylvania agriculture are key to getting the Commonwealth back on track to meeting its Clean Water Blueprint goals. More than 80 percent of the remaining pollution reductions must come from agriculture.

“Agricultural runoff across the Susquehanna River Basin significantly impairs the quality of the Chesapeake Bay,” said Sen. Casey. “I worked with Senator Cardin to support Pennsylvania farmers implement practices to keep sediment and nutrients out of waterways, which will restore the quality of the Chesapeake Bay for fisherman, boaters, swimmers, and all those who rely on the Bay. In addition to cleaning up our waterways and reducing further pollution, this funding brings us one step closer to a more sustainable economy.”

“Pollution doesn’t respect state boundaries, which is why I have collaborated closely with Senator Casey to find ways to reduce upstream sources of pollution that make their way to the Chesapeake Bay,” said Sen. Cardin. “This federal investment will help us work more cooperatively with farmers and expand the use of the best-available technologies to identify the most effective conservation strategies to reduce pollution that enters the Susquehanna River Basin.”

Within the 150 square-mile Pequea Creek Watershed, the federal investment will support practices that keep soils and nutrients on the land instead of in the water with such practices as cover crops, no-till agriculture, nutrient management, animal waste management, riparian buffers, streambank fencing, streambank stabilization, and reducing legacy sediment. Originating in a small portion of western Chester County, the Pequea watershed extends through the heart of Lancaster County.

“The development of the Pequea and countywide plans went hand-in-hand, with a shared community-driven, technically sound approach,” Gish added. “Their common goals and strategies serve to multiply the impacts of each plan, resulting in cleaner water, both locally and regionally.”

The goals for the 25 square-mile Halfmoon Creek Watershed plan are to reduce sediment, preserve critical landscapes, restore degraded landscapes, and foster stewardship of the watershed. The creek flows through Centre and Huntingdon counties.

“Having this level of support gives us and partners the fuel we need to make the goals we set forth in the plan a reality,” said Caitlin Glagola, CBF’s Pennsylvania Watershed Coordinator who orchestrated the plan at Halfmoon Creek. “Combined with past and present initiatives in the watershed, we have a real chance at making significant strides in delisting impaired stream miles of Halfmoon Creek.”

Glagola and Gish are now working on new watershed restoration plans for Marsh Creek in Centre County and the Upper Conestoga in Lancaster, Berks, and Chester counties respectively.