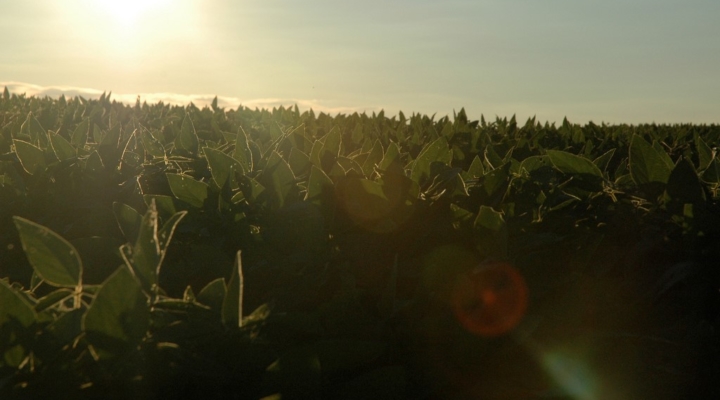 The Fed's St. Louis regional bank reported that farmers in its region estimated that the majority of the soybean crop had yet to be priced, "leaving farmers exposed to current market conditions." (Delta Whiskey, Flickr/Creative Commons)

WASHINGTON (AP) — The Federal Reserve reported Wednesday that its latest survey of business conditions nationwide found rising concerns over the impact Trump administration trade policies could have on the economy.

The Fed’s 12 regional banks said the economy is growing at a moderate pace although three districts — Philadelphia, St. Louis and Kansas City — depicted activity as somewhat below average.

While businesses remained optimistic about near-term prospects, the Fed found worries about trade had prompted some businesses to scale back or postpone their capital investment plans. Higher tariffs stemming from President Donald Trump’s get-tough trade policies were reported to be pushing up input costs for some manufactured goods.

The Fed’s survey, known as the beige book, will be used when central bank officials meet later this month to decide whether to raise interest rates again.

The Fed has raised interest rates twice this year, in March and June. Many private economists believe it will hike rates again at the Sept. 25-26 meeting and will move rates up a fourth time in December. The central bank is responding to low unemployment and rising inflation by pushing its benchmark, federal funds, rate higher to keep the economy from overheating.

“Over the next year or two, barring unexpected developments, continued gradual increases in the federal funds rate are likely to be appropriate,” Fed board member Lael Brainard said in a speech Wednesday in Detroit. She noted that the economy is receiving a boost from fiscal stimulus provided by higher government spending and tax cuts.

The Fed survey reported that labor markets were tight throughout the country with construction workers, truck drivers, engineers and other high-skilled workers remaining in short-supply. But the report also found that a number of Fed districts were also seeing shortages of lower-skilled workers at restaurants, retail stores and other places as the country’s unemployment rate has fallen to 3.9 percent, its lowest point in nearly two decades.

“Six of the 12 districts cited instances where labor shortages were constraining sales or delaying projects,” the Fed said. While tight labor markets can trigger unwanted inflation by pushing wages up, the Fed reported that so far the retail price of goods and services continues to rise at a moderate pace although the price of construction materials and transportation costs were rising more rapidly.

The report also found that despite the tight labor markets, wage growth had remained moderate, although a number of districts had cited steep wage hikes for construction workers. Some businesses were relying increasingly on benefits, such as vacation time or bonuses, to attract or retain workers.

The Fed’s St. Louis regional bank reported that farmers in its region estimated that the majority of the soybean crop had yet to be priced, “leaving farmers exposed to current market conditions.” After the Trump administration imposed tariffs on Chinese goods, China retaliated by targeting U.S. products such as soybeans for higher tariffs, an action that threatens to cut into demand and the price of American farm products.