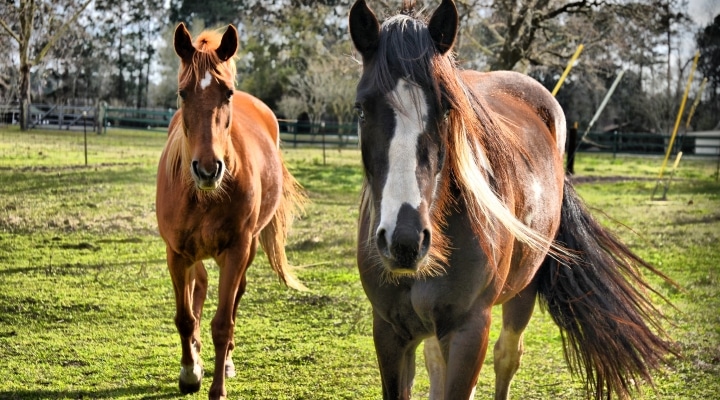 The Florida Department of Agriculture and Consumer Services (FDACS) is encouraging Florida’s horse community to be vigilant of Eastern equine encephalomyelitis(EEE), a serious viral disease that can affect horses, birds, and humans and cause neurological injury and death. (photo by Karsun Designs, Creative Commons/flickr.com)

TALLAHASSEE, Fla. — The Florida Department of Agriculture and Consumer Services (FDACS) is encouraging Florida’s horse community to be vigilant of Eastern equine encephalomyelitis(EEE), a serious viral disease that can affect horses, birds, and humans and cause neurological injury and death.

FDACS officials recently confirmed the state’s ninth equine case of EEE this year, in a yearling Standardbred filly in Gilchrist County, which has been euthanized. This type of virus, known as an arbovirus, is transmitted to horses and humans by certain mosquitoes, which become infected when they feed on infected birds that circulate high levels of the virus in their blood for a period of time. These mosquito species include some Aedes, Coquillettidia, and Culex species. The disease is not directly transmitted between horses, from birds to horses, or from horses to humans.

“Despite being rare, the EEE virus is one of the most dangerous mosquito-borne diseases in the U.S., with typically a third of cases resulting in death,” said Agriculture Commissioner Nikki Fried. “It’s imperative that those working with horses watch closely for EEE signs, and everyone who ventures outside in Florida should take basic steps to avoid mosquito bites. These common-sense precautions will also help protect against Zika, dengue fever, and other mosquito-borne diseases.”

According to the U.S. Centers for Disease Control and Prevention (CDC), there were 38 confirmed human cases of EEE in 2019, and 15 deaths; no human cases were reported in Florida. However, Florida is home to nearly 300,000 horses, with more than 70 percent involved in showing and recreation, and Marion County has more horses than any other county in the nation. In 2019, there were 28 confirmed cases of EEE reported among horses in Florida. The fatality rate in horses exceeds 90 percent.

“EEE is a serious and often fatal infection in horses, so we encourage all horse owners, breeders, and others working with horses to ensure horses are vaccinated against EEE, and to monitor for the initially-subtle signs of the disease,” said Dr. Michael Short, State Veterinarian and Director of the FDACS Division of Animal Industry. “Suspected or known cases of EEE must be reported immediately to FDACS, as this is a critical step in monitoring and preventing arboviral activity throughout Florida.”

Clinical Signs & Diagnosis: The incubation period in horses of EEE is approximately one week, and early signs are generally subtle and often undetected. These may include fever, depression, stiffness, and lack of appetite, and may progress to propulsive walking, aggressiveness, hyperexcitability, paralysis, and blindness, among other signs. Some EEE-infected horses may show no clinical signs before death. EEE can be confused with other central nervous system diseases and toxic poisoning. Blood samples should be collected by a veterinarian and sent for diagnostic testing including the EEE IgM capture ELISA test, which is conducted at the FDACS Bronson Animal Disease Diagnostic Laboratory.

Reporting: Suspected or known cases of EEE must be reported to the State Veterinarian’s Office. To report EEE or other reportable diseases, call 850-410-0900 between 8:00 AM and 5:00 PM, Monday through Friday. For after-hours reporting, call 800-342-5869 or email RAD@FDACS.gov. Horses act as a sentinel for human risk. FDACS reports all cases of EEE to the Florida Department of Health. Upon reaching a threshold of animal cases, the Department of Health works with counties to release county-wide health alerts.

2020 State of the Science Meeting

Dairy's safety net is best – if farmers use it